A disagreement between Russia and Saudi Arabia has sparked an aggressive price war in the oil industry and caused panic in global markets. The two largest producers and exporters of oil failed to reach a settlement on production limits, which has led to Saudi Arabia to slash crude oil prices and set out plans to increase supply to the market.

Russia had refused to support the Saudi-led proposal to enact deeper cuts to oil prices to deal with the shockwaves of the coronavirus outbreak, breaking a three-year pact Moscow had with the Organisation of Petroleum Exporting Countries (OPEC). 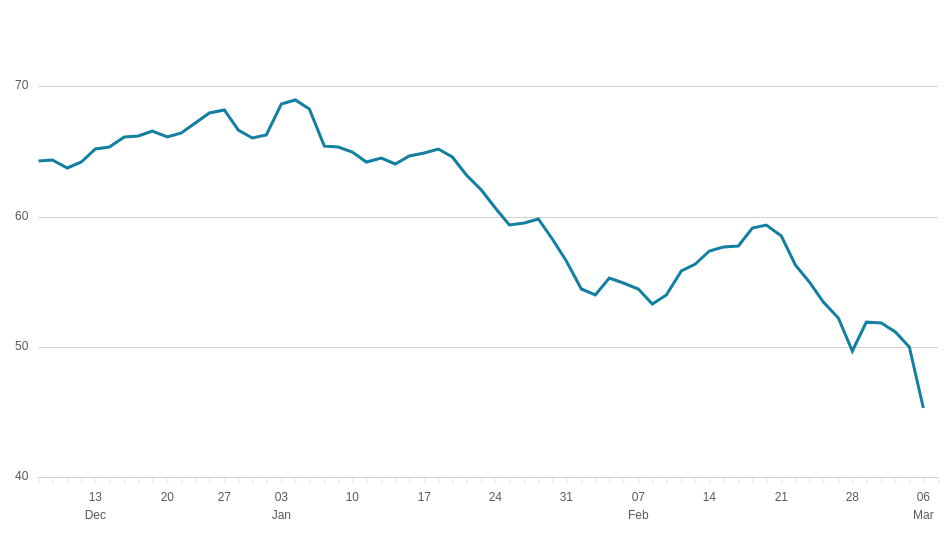 Asset prices and markets had already been reeling from the spread of coronavirus infections around the world, and this latest news has turbocharged losses in stock markets. Brent crude is now sitting at $35.92, which is a drop of over a fifth over the weekend and a 47.87% drop from the high in January.

This is a question of wealth investment. Certain pension funds will include shares and bonds in oil companies, who are seen as “safe haven” investments because oil is required in the production process, directly or indirectly, of nearly everything on the planet. A collapse in the price of oil will hit the value of these firms, as seen, for example, by the 15% drop in share prices in both BP and Shell. This price war is also discretely aimed at shale oil firms in the United States, who are likely to become unviable with such low prices. Holders of junk-status bonds from these shale producers are likely to lose out as a result. On the other hand, fuel costs will be reduced, relieving consumers and transport firms.

The diverse investment portfolio should always have a combination of different assets. Physical gold has its reputation of holding wealth over time, and would cushion any losses in other areas.

Some economic analysts have highlighted the dangers facing Russia’s economy as a result of this price war, but conveniently overlooked the fact that Russia has been stockpiling gold discretely over the last decade. Moscow may now feel confident enough that any marginal losses in its oil revenues will be compensated by gains in the value of its gold reserves. The big question is, has Russia pulled off a potential game theory victory? Only time will tell, but the situation looks favourable for Moscow.