Central banks around the world continue to buy gold at unprecedented rates, with the People’s Republic of China and Russia driving demand for the precious metal. The latest figures from China show the country have added close to 90 tonnes to their reserves this year (up to August 2019), which would give an official gold reserve of 1942.4 tonnes. This announcement is surprising given that communist China has normally been very coy about its gold acquisition strategy. The People's Bank of China very rarely publishes official statistics concerning its gold reserves, so this revelation is significant.

Russia is much more open about its gold strategy. They continue to steadily stockpile the precious metal, with 117.4 tonnes being added as of October 2019, bringing their total reserve to 2207 tonnes. Amazingly, both countries have managed to double their gold reserves in roughly five years, in contrast to western nations like the United States, the United Kingdom and France simply maintaining their gold reserves across this period.

The most striking statistics, however, come from Poland and Turkey, with Turkey acquiring nearly 110 tonnes so far this year, and Poland amassing just under 100 tonnes in the same timeframe. This is a massive move for both countries, given the size of their respective economies. Elsewhere, Kazakhstan quietly added 26.9 tonnes of gold to its reserves, giving it 377.3 tonnes, but Uzbekistan sold 29.5 tonnes, leaving them with 325.7 tonnes. The situation with Iranian gold reserves is unclear given the American sanctions against Teheran. It is extremely likely that the Iranian government is using gold as a bartering item to evade these sanctions; the US currently forbids the export of gold to Iran to combat this.

A distinct pattern emerges when one splits nations between those acquiring gold and those which are not. Countries dashing for gold tend to fall within China’s “Belt and Road” initiative. Is there more to this or is it a coincidence? Gold has strengthened against the main reserve currencies of the world, in particular gaining over $300 against the US Dollar this year so far. At the time of writing, the price of gold is $1490.25 (£1181.02) per ounce. Is a challenge to the Dollar beginning to emerge? It seems these nations are betting against the greenback and going for gold. 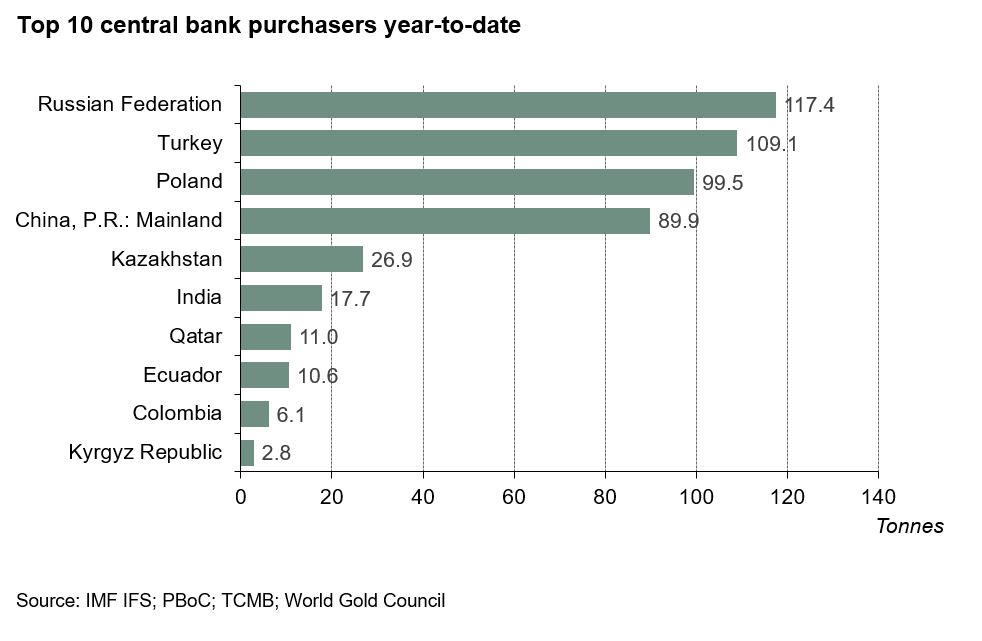 Data was taken from the World Gold Council - references can be found on their website.