So far, March has been an interesting month to say the least. We have seen huge fluctuations in the precious metals market, including new all-time records for gold priced in Sterling and a substantial collapse in the price of silver. 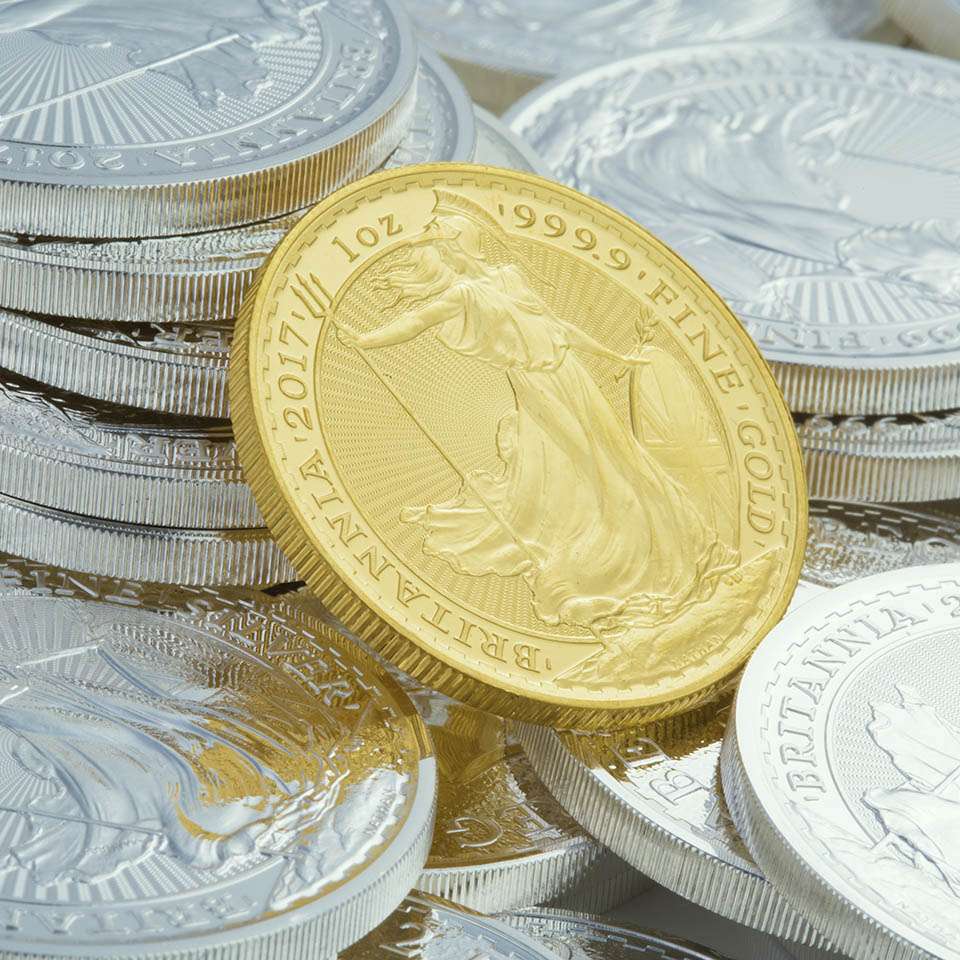 Gold peaked at £1302.68 on 9th March, before a big sell-off (apparently driven by the sale of gold ETFs) dropped it to around £1182.51 on 16th March. Since then it recovered to the £1270 - £1280 range late last week through to Monday. Today, it has rocketed up to about £1376 at the time of writing, coming close to breaking the record price for gold denominated in Pounds Sterling again. 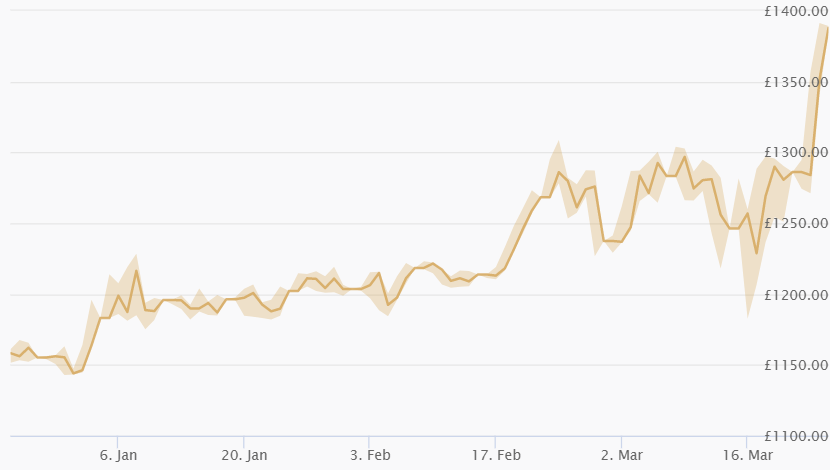 Smart investors already bought their gold in early January around the £1150 level. Even smarter ones were buying a year ago for under £1000 per ounce, even as low as £971! We find it quite amusing that very little people wanted gold at these low prices, but now that price levels are rising, people seem to be rushing to buy up gold.

Is it still smart to be buying gold at the current price levels? We don’t know! It should be pointed out that the appreciation of the Sterling value of gold is mostly because of a strengthening US dollar, of which precious metals are primarily priced in.

At all the dips and troughs during the past year, we would certainly have been keener to keep our gold stock up, and we would have been advising customers similarly.

Although we are always happy to sell gold to investors, we are almost always even keener to replace it as soon as possible. Our distance buy-in service is currently available for those looking to sell bullion to us. 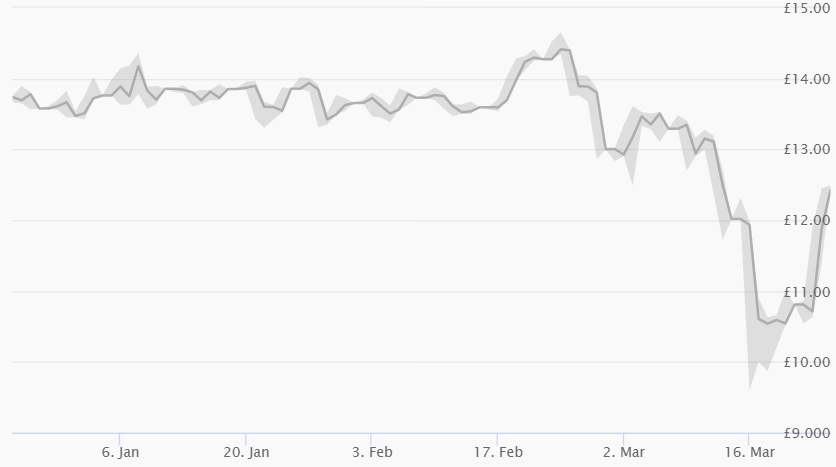 It looks like the ratio hit an all-time high of 126.35 on 18th March, with spot silver briefly dropping below £10.

Smart silver investors should have been filling their boots (car boots?) with the stuff during that week, if they could find any. Silver prices remained below £11 until 23rd March.

At the time of writing, silver is currently £12.18 per ounce, and the Gold:Silver ratio has only eased slightly to 113.22; so silver still remains relatively "cheap" compared with gold. 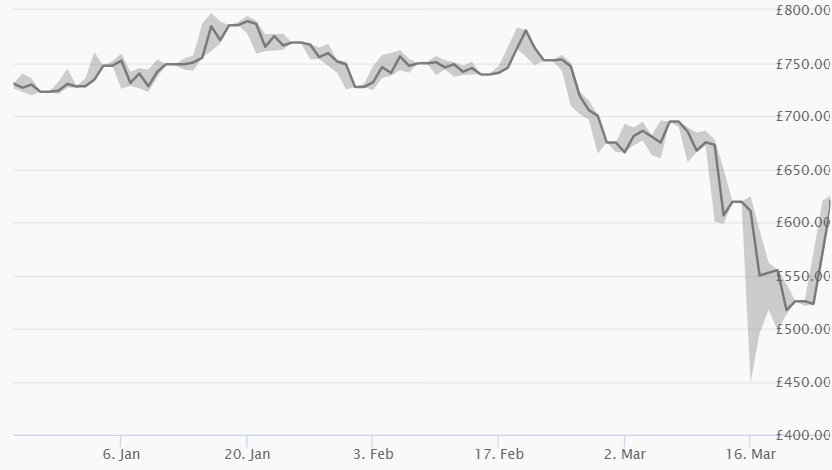 Platinum looks dirt cheap at around £616. Unfortunately, we do not stock new platinum bullion, and we currently do not have any secondary market platinum bullion available to buy. 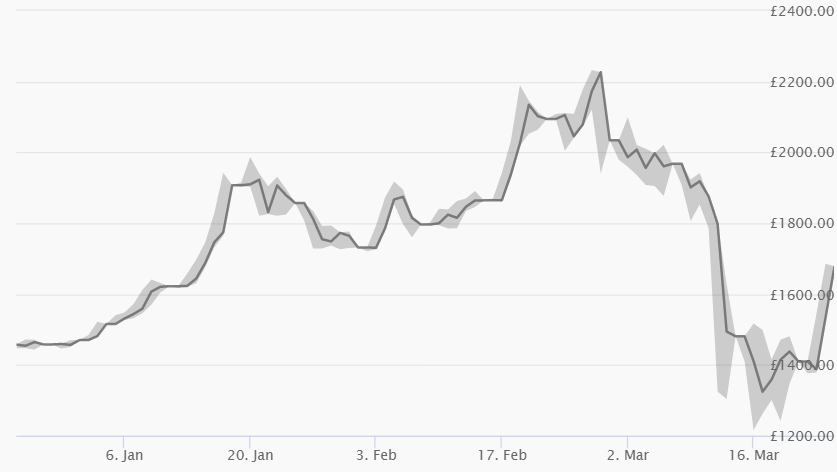 It looks like the Palladium bubble bust in spectacular fashion over the last fortnight. From a high of £2232 in late February, it sunk to a low of £1215 on March 16th.

At the time of writing, it has recovered to around £1784 per troy ounce. With these figures, palladium deserves a reputation as possibly the most financially volatile precious metal.

With assistance from the company director, Lawrence Chard