The heads of central banks around the world have pledged to intervene in markets to shore up losses brought on by the coronavirus outbreak. Markets had had their worst week since the 2008-09 financial crisis, but now promises from global financial institutions have caused a partial rebound. Governments have also pledged fiscal packages to soften to expected blow the coronavirus epidemic will have to economies around the world, as fears are growing that it could spark another global economic recession. A press release from the G7 stated:

"Given the potential impacts of Covid-19 on global growth, we reaffirm our commitment to use all appropriate policy tools to achieve strong, sustainable growth and safeguard against downside risks"

All major central banks and governments are expected to act. Australia was the first country to make a move, with its central bank cutting interest rates to half a percent today and the Australian government announcing it was preparing a “targeted and measured” spending package. The European Central Bank is expected to lower its deposit rate from –0.5% to –0.6% and closely monitor events, and the Bank of England could also lower its base interest rate after defying previous expectations to do so. These events represent a baptism of fire for Christine Lagarde and Andrew Bailey, who are recent appointees to the heads of their respective central banks.

Across in the United States, President Donald Trump is continuing one of his favourite pastimes in pressuring the Federal Reserve to cut its funds rate. In a scathing reference to Fed chairman Jerome Powell, he blasted on twitter: 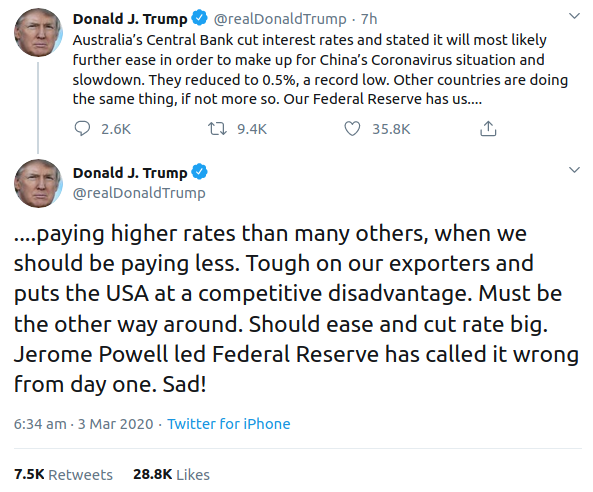 The Fed had already reduced the funds rate by 0.75% over the last 6 months to leave it at 1.5-1.75%, and is expected to cave into pressure from politicians and investors to cut further. Mr Powell has also stated previously that quantitative easing is also being considered as a response to an economic downturn, and this could be an opportunity to use it.

Global policymakers have indicated that the response to another economic crisis would be more money creation, more spending, and lower interest rates - precisely the same methods used in 2008-09. Have they learned their lessons? Gold and silver strengthened against every major currency during the last crisis when these stimulus measures were last used on a mass scale. Silver has gained 46.42% in Sterling value and gold's value in pounds has risen 179.46% since 2008. It is worth remembering that with every economic crisis there are losers, but there are those who do well out of the chaos.