Interest Rates Cut Could Lead To Strengthening Of Gold

US president Donald Trump believes interest rates should be cut, as seen in his vociferous campaign towards the US Federal Reserve in the belief lower rates will boost stock market prices, albeit over the short term.

Generally speaking, lower interest rates mean investors seeing a smaller return on their cash savings, pushing people to invest in stocks. As lower interest rates can mean lower repayments on mortgages and other debt, the public have more cash to spend on goods, potentially boosting spending on consumer goods, thus increasing the demand for the products of companies floated on the stock exchange.

If President Trump gets his wish, creating higher inflation in the US, gold prices would be expected to rise.

Economists are awaiting the address of the US central bank on Wednesday June 19th, which is expected to give an insight in to its plans for the rest of 2019. Should there be a shift in monetary policy, gold is expected to be amongst the main beneficiaries.

At the time of writing gold had topped £1080/oz, and show no sign of faltering. As of last Friday, the price had increased for an astounding eight straight days, the yellow metals best performance since June 2014. 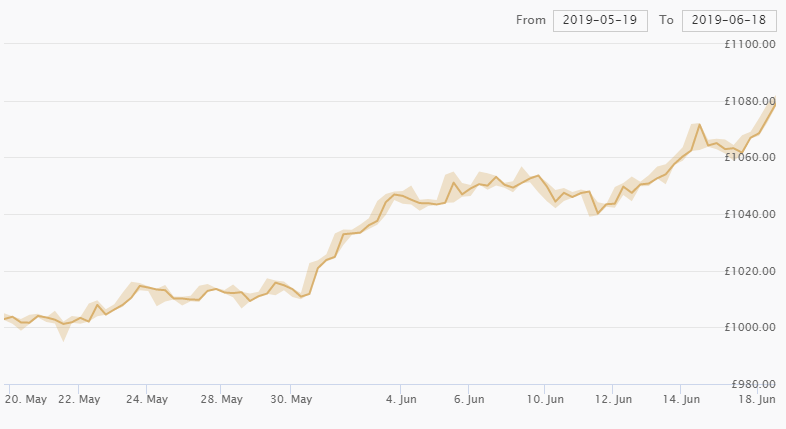 All signs point to gold going from strength to strength in these uncertain times. In 72 currencies, notably the Indian rupee, Canadian dollar and Australian dollar the value of gold is close to, or already at, an all time high. We could be looking at the beginning of a bull run in gold. Market reports claim speculators who had previously not been interested in gold are now piling in to the market.

Goldman Sachs, a leading global investment banking, securities and investment management firm who provide a wide range of financial services, believe gold will continue to gain strength through the various market factors all working in the yellow metals favour. As mentioned above, the Fed is on hold, added to interest rates being lower, and weakening oil prices.