With just over three weeks until polling day, the main political parties are scrambling over each other with fresh promises on government spending increases and tax cuts. Firm commitments will be published in party manifestos which are expected to be released at some point this week.

The Conservatives have vowed to invest £100 billion into infrastructure such as road and railway links, with £500 million specifically to reverse some of the 1960s “Beeching Cuts”. As well as this, they have pledged around £9.8 billion in investments in new hospitals and improving schools too. Moreover, they have also indicated they would bring in tax cuts of around £1 billion to support businesses.

Labour have also stated a desire to ramp up investment in public services with a commitment to spend £150 billion on education, housing and healthcare. Most notable is their £20 billion policy to provide free broadband to every home and business in the country. In other areas, the party have promised £250 billion to instigate a “green industrial revolution” and made a pitch to the student vote by pledging to scrap university tuition fees.

The smaller parties are also making lavish promises to entice voters. The Liberal Democrats and the Greens are both addressing concerns around the environment by both promising sums of £100 billion and £1 trillion over 10 years respectively to deal with the “climate emergency”. The Brexit Party, however, has gone down a more traditional route by stating that they would invest £200 billion on infrastructure, wi-fi and services for young people.

Below is data from YouGov which shows nationwide voting intentions. Data was collected between 14-15 Novemeber and the sample size was 1670 adults.

Sterling has strengthened slightly over the week, perhaps encouraged by markets reacting to the 17-point lead for the Conservatives in the latest polls. It is currently trading at $1.29637, which is an increase of 1.08% from last week. This gain should not be taken for granted since this is early days in the election campaign, and there could be plenty of twists and turns for the main parties. 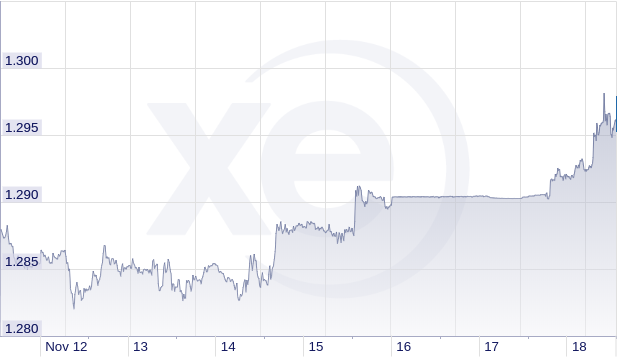