Problems for China Despite New Trade Deal with USA

As expected, there has been a thaw in the trade war between the United States and the People’s Republic of China with the signing of the “Phase One” deal last Wednesday. It should be noted that the substance of this deal represents more of a ceasefire in the trade war between the two nations and not a fully-fledged compromise where trade barriers are significantly reduced. Rollbacks on tariffs imposed on $360 billion on Chinese goods by the US are limited, with the vast majority of trade barriers remaining in place. However, Washington has committed not to impose any more punitive tariffs onto China and removed the US Treasury-imposed “currency manipulator” tag on the Chinese yuan. In return, Peking has promised to strengthen intellectual property rights within China and pledged to purchase imports of American products worth $200 billion. 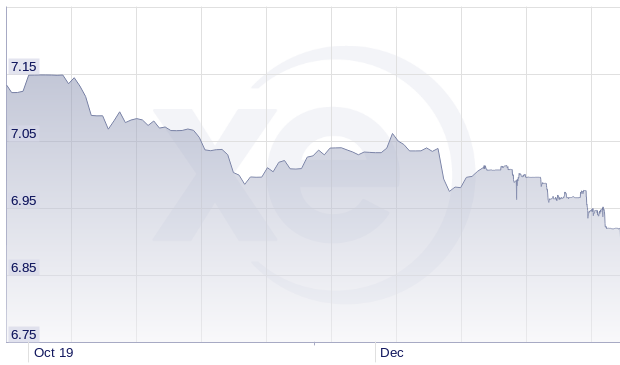 Markets have not reacted with any great zeal to this announcement, despite all the pomp and ceremony displayed in the signing of the documents on Wednesday. There is very little in the way of this leading to any sort of warmer relations between the US and China, who are increasingly becoming strategic rivals and antagonistic in their dealings towards one another. On top of this, statistics from the Chinese National Bureau of Statistics show the economy in China has grown at its slowest pace since 1990 and there are suspicions that both countries may engage in money easing policies to stimulate growth. Over the last three months, the Chinese yuan has strengthened aginst the US dollar by 3.68%, and currently one dollar is worth ¥6.86. In the same timeframe, gold also strengthened against the dollar by 3.68%, rising by $55.40, which leaves it currently trading at $1560.10 per troy ounce. This “détente” does provide a welcome de-escalation in tensions between the world’s two largest economies though, but caution should remain as to the wider economic health of both nations.