Germany Dodges Recession by a Whisker

Germany, the most powerful economy in the European Union, has defied expectations and avoided entering a recession according to the latest figures from the German Federal Statistics Office Destatis. The economy of Germany grew by just 0.1% in the third quarter of 2019, but it means the country has avoided a technical recession (defined as two consecutive quarters of an economy in contraction).

There had been concerns that Germany could have slipped into recession due to upheaval in the car industry, of which Germany is a major exporter, and continued uncertainty of the future UK-EU trading relationship. Worldwide issues such as the Sino-American trade dispute and slowing global growth had also hit expectations within the German economy. But robust domestic demand has helped to avert a recession, assisted by ever-strong labour market conditions. As a result of this near-miss, the ECB and IMF have both called for increased fiscal spending to stimulate economic growth, with both institutions pointing out that record-low interest rates can be taken advantage of. 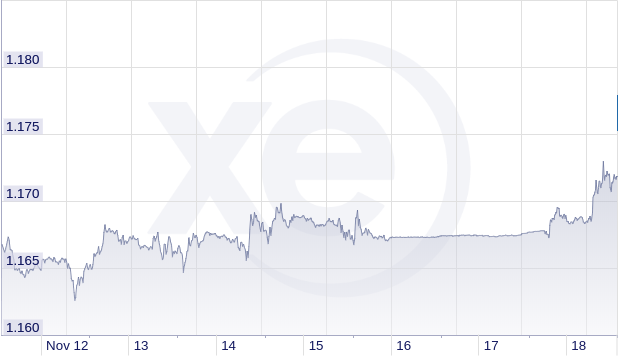 The United Kingdom, like Germany, has also steered clear of a recession thanks to increased consumer spending and a growth in British exports, perhaps fuelled by Sterling’s current weak position. British growth was measured at 0.3% in the third quarter. The other large EU economies, France, Spain and Italy, grew by 0.3%, 0.4% and 0.1% respectively. This weak growth across the board in Europe may explain why there was little fluctuation in the Sterling-Euro exchange rate. The Pound is worth €1.17102 currenly, which is a slight rise of 0.7% over the week. With an election coming up in Britain and concerns around eurozone growth, it is not unreasonable to expect this exchange rate to become more volatile should circumstances on the contenient or in Britain change significantly.