This is our blog. If you are interested in buying Beatrix Potter fifty pence coins click here.

The Beatrix Potter coins have taken the world by storm since the first release of the series in 2016. In 2017, we are getting four new Beatrix Potter 50p coins.

We have yet to discover just how many designs The Royal Mint will produce, as we think even they were surprised at the success of the 2016 coloured silver proof Peter Rabbit coin in March 2016.  However, as there are 23 books in the original tales you have to wonder whether The Royal Mint will produce a coin for each tale. We're sure there will be many coin collectors who are hoping that this will be the case!

2017 sees the release of another three characters as well as a new Peter Rabbit 50p coin. Designed by Emma Noble, her coin engravings have translated beautifully from the original Beatrix Potter illustrations. We expect them all to be equally as popular as the first six coins. 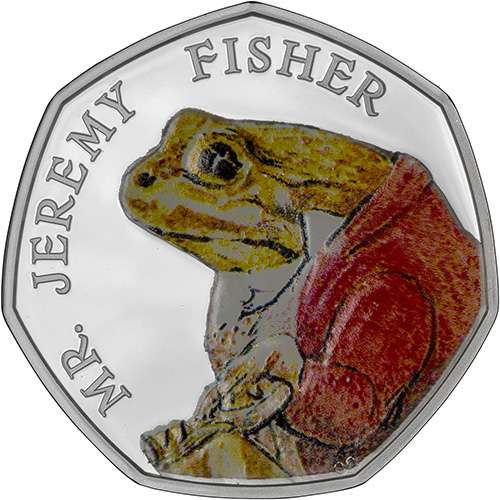 The Tale of Mr Jeremy Fisher was the eighth tale in the original series and tells the story of a frog (Mr Jeremy Fisher) who goes fishing and plans to invite his friends for tea.  This humorous tale about how his fishing trip doesn't quite go plan is a favourite with generations. 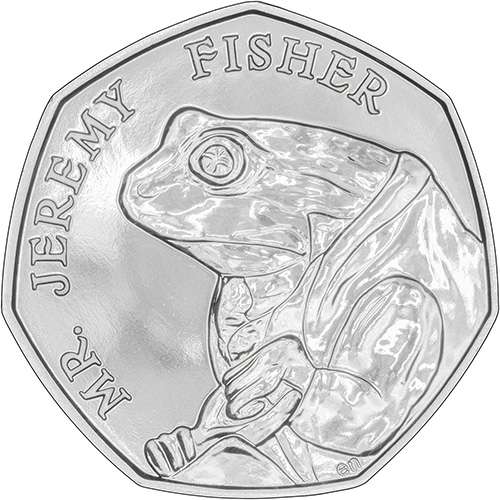 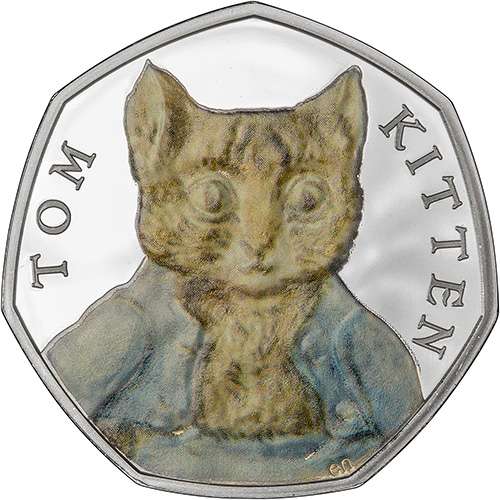 The eleventh coin in the series, published in 1907, The Tale of Tom Kitten is a story all about manners and naughty kittens.  Tom and his sisters, Mittens and Moppet get in to trouble with their Mother when she has organised to have friends for tea. 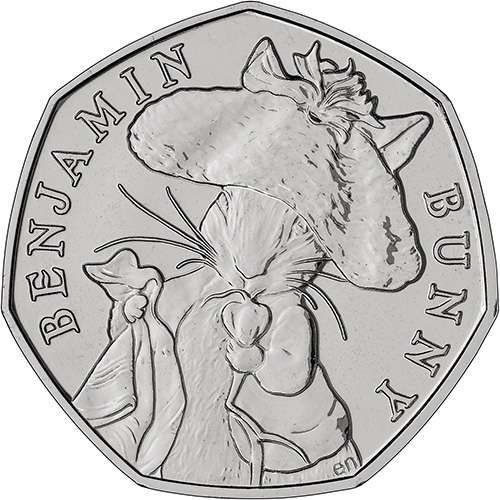 The official release date for the Benjamin Bunny 50p coin was September 2017.

As the first book in the series – and probably the most famous Beatrix Potter character of all time – it is no wonder that Peter Rabbit was the first character to feature on the fifty pences. After the success of the first Peter Rabbit coin in 2016, The Royal Mint then created another coin featuring this mischievous little bunny – this time his full body (as seen on the front cover of the book) rather than just his face as can be seen on the 2016 coin. 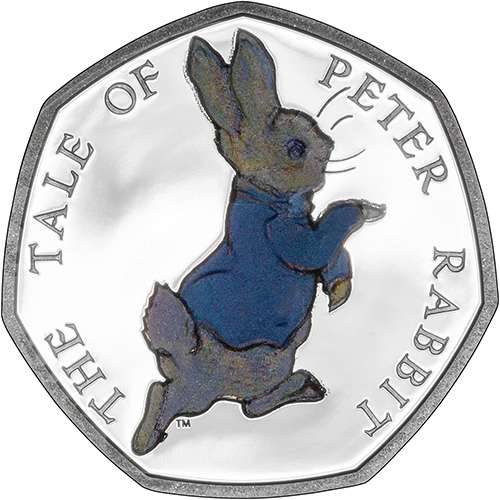 The 2017 coloured silver proof Peter Rabbit coin sold out within 12 hours – both at the Mint and our website. Please register your interest here if you would like to be one of the first to hear when this coin is available again. This fifty pence is also available as a brilliant uncirculated coin in a presentation folder. 2016 also saw the release of four other coins in this series; Jemima Puddle-Duck; Mrs Tiggywinkle; Squirrel Nutkin and a fifty pence coin to commemorate the 150th Anniversary of Beatrix Potter's birth in 1866.  Interestingly, The Royal Mint have not produced the characters in the order in which the books were released.  We can only assume that they have chosen them based on their popularity with the British public.

What is the Difference Between the Proof, Brilliant Uncirculated and Circulation Coins?

All of the coins featuring characters have been extremely popular in the silver proof version with the brilliant uncirculated coins following close behind.

How Much is My Fifty Pence Worth?

Aah, this is probably the most frequently asked question. It all depends on supply and demand, low mintage and condition of the coin. A coloured silver proof coin which has been removed from the packaging would only be worth the intrinsic metal value as collectors are looking for a perfect coin.

When the 2016 Peter Rabbit silver proof fifty pence was first released collectors were battling to pay over £800 for the coin, we even saw one for sale at £3,995! Last Easter, the 2016 Peter Rabbit fifty pence was released into circulation in the lake District. We were amazed to see the coin appear on auction sites for figures in excess of £20. A huge return on a coin with a denomination of fifty pence and rather crazy when you could buy the brilliant uncirculated fifty pence in a folder for £9! Generally, demand calms down after the initial rush when the coin is released.

If you are interested in collecting fifty pence coins, read our blog Is My Fifty Pence Rare? to find out which ones to look out for

As the fifty pences get released into circulation, we would love to hear where you found one first, tweet us @Chard1964Ltd when you find one in your change.