Manchester has an illustrious history in economic and sociological circles. The industrial revolution, The Anti-Corn Law League, the suffrage movement and as the birthplace of communist ideology. It's emphasis on free trade during the mid 1840s led to the pejorative term "Manchesterism". 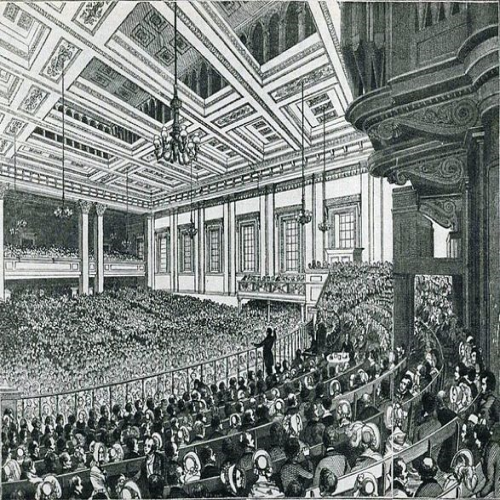 The fight for laissez-faire or “free trade” during the mid-19th century, is widely accredited to the Anti-Corn Law League which settled in its Manchester HQ in 1939. The League which argued against the Corn Laws which were implemented in 1815. The laws, which placed high tariffs on (cheaper) imported grain, which meant that the population were left with high-priced British corn. These laws were particularly harsh during times of shortage.

These laws combined with the lack of suffrage led to a number of protests including a mass rally in Manchester city centre, which would later be known as the Peterloo Massacre after a number of protestors were killed when the local Yeomanry charged the crowd.

The liberalist activities of the Anti-Corn Law League led to the coinage of the perjorative,  “Manchesterism”, sometimes called Manchester Liberalism or The Manchester School of Economics.

The term “inflation” is commonly referred to as an increase in the general price level, but in fact, is more correctly termed as an increase in the quantity of money in circulation. Many modern-day economists consider this monetary expansion as the cause of the boom-bust cycle as it drives up prices causing the inevitable collapse.

Historically, bank notes were redeemable in gold. This meant that bank notes could be given to a bank and a corresponding amount of gold would be returned. Bank notes would then be considered as “claims” to gold.  Naturally, there would be a finite amount of gold in circulation, but what would happen if more bank notes were issued than there was gold in the bank? Well, it happened. Frequently.

The Bank Charter Act 1844 restricted the powers of commercial banks to issue bank notes which was given the sole responsibility of the Bank of England. This would, it was believed, to prevent any future occurrence of the panics that had occurred previously.

However, an 1866 panic, led to Smith, who was now a member of parliament; to write to his successor at the Manchester Chamber of Commerce. Smith wrote:

“Seeing that the Joint Stock Banks have become the controllers of the money market, it is important to inquire, what are the principles on which their business is conducted.”

Statements by three of the Joint Stock Banks of London reported that their deposits totaled £60,487,565. Smith continues:

Smith made a number of honest, if not radical suggestions to prevent such future calamities. A fund that would provide in times of trade fluctuations, an end to bank monopolies and even the abolition of the monopoly of the Bank of England.

To some, problems of inflation of banking are merely the mark of a destructive capitalist economy. In fact, the issues we face today are nearly identical to those in the 19th century. Mismanagement over the economy leading to a never-ending boom-bust cycle.

It would be interesting to know what Smith’s opinion of today’s banking system would be. It probably wouldn’t be a positive one.