This is our blog. If you are interested in purchasing 2017 Year of the Rooster Lunar coins click here.

2017 Chinese New Year celebrates The Year of the Rooster

The lunar calendar has become popular in western culture. So much so, the Perth Mint in Australia, as well as our very own Royal Mint, produce silver and gold coins based on the twelve-year Chinese zodiac cycle. In 2017, we will celebrate the Year of the Rooster.

Australian Year of the Rooster Coins 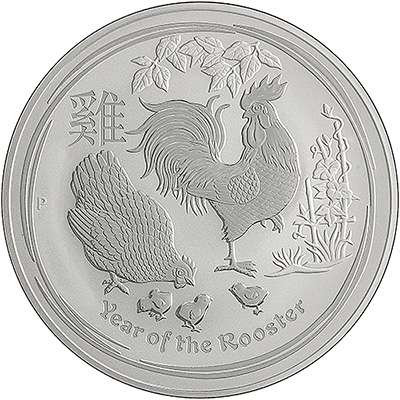 The Perth Mint of Australia are currently on their second series of Chinese lunar calendar coins. The 2017 Australian Year of the Rooster bullion coins are issued in both silver and gold in 0.9999 fineness

The 2017 Year of the Rooster silver coins feature a male cockerel in his full glory with his hen, three chicks and tufts of grass. The reverse shows the fourth definitive portrait of Queen Elizabeth II, like the previous coins in the series. The gold version bears a cockerel strutting through leafy foliage. 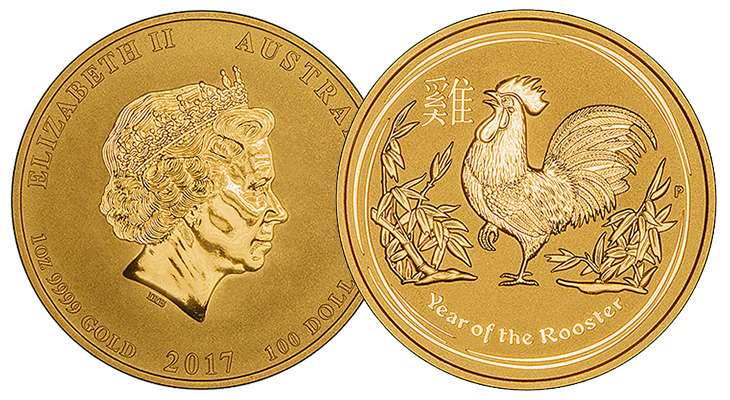 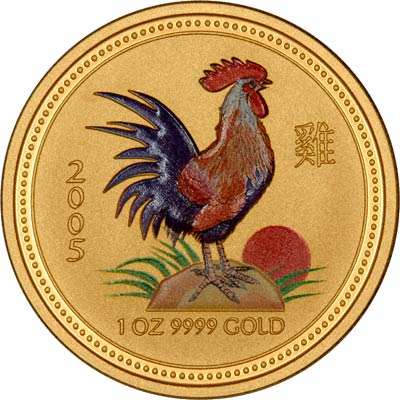 In the Perth Mint's Series One, the Year of the Rooster was celebrated in 2005. The reverse of the gold coin has also been issued in colour as shown in the photo below. Collectors and investors particularly like the beautiful designs and the high quality finish.

The Royal Mint Year of the Rooster Coins

The Royal Mint Year of the Rooster engraving was designed by Wuon-Gean Ho, and shows a right facing Marsh Daisy rooster. This is a rare UK poultry breed that originates in Lancashire. The crowing rooster stands among ten marsh daisies (Armeria maritima, commonly known as thrift, sea thrift or sea pink). The reverse shows the fifth definitive UK coin portrait of the Queen by Jody Clark. 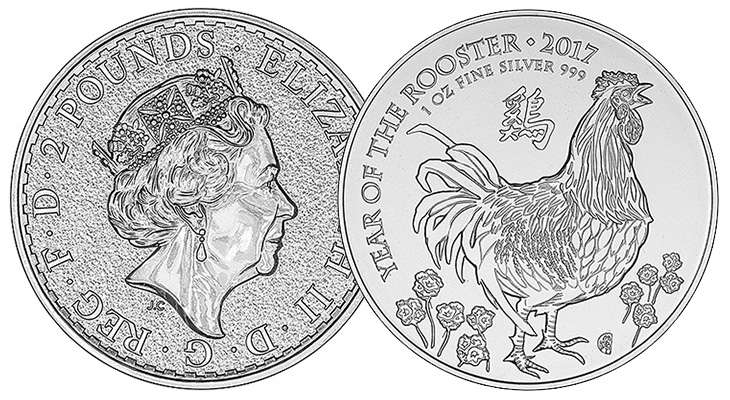 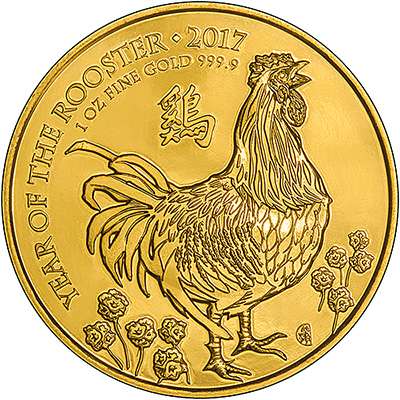 2017 Royal Mint One Ounce Year of the Rooster coins are available in gold and silver.

The rooster (or cockerel) is the tenth animal in the cycle. Those born during the year of the rooster are said to be observant, courageous, talented and hardworking. Does this sound like someone that you know?

Each zodiac year also falls within one of five elements; wood, water, fire, earth, or our personal favourite, gold (or metal)! Each element has different characteristics which define how the different elements interact with each other. 2017 is the year of the fire rooster, meaning those born during this element are thought to be trustworthy, with a strong sense of timekeeping. The next year of the fire rooster will be in 60 years - 2077.

Are you a Rooster?

If you were born in the following years then you’re a rooster!

Read our blogs to find out more about the 2017 Year of the Rooster Coins:

The Royal Mint 2017 Lunar Year of the Rooster Coins