The Australian bullion menagerie is growing!

The Perth Mint of Australia has launched their 2017 Bullion Coin programme of gold and silver coins and you won’t be disappointed.

Whether you are a coin collector or a precious metal investor, the 2017 Australian coins will meet your expectations; beautiful designs with exceptionally high finishes at competitive premiums.

With the exception of the silver Kangaroo coin all the Perth Mint coins are issued in capsules which further protect and enhance these stunningly attractive bullion coins.

2017 Australian Lunar Year of the Rooster

These coins are highly sought after and are probably the most eagerly awaited Lunar Calendar coins in the world. Each year, the Australian Perth Mint issue a stunning design produced in both 99.9 silver fineness and 99.99 gold fineness – the Series Two Year of the Rooster, lives up to our expectations. 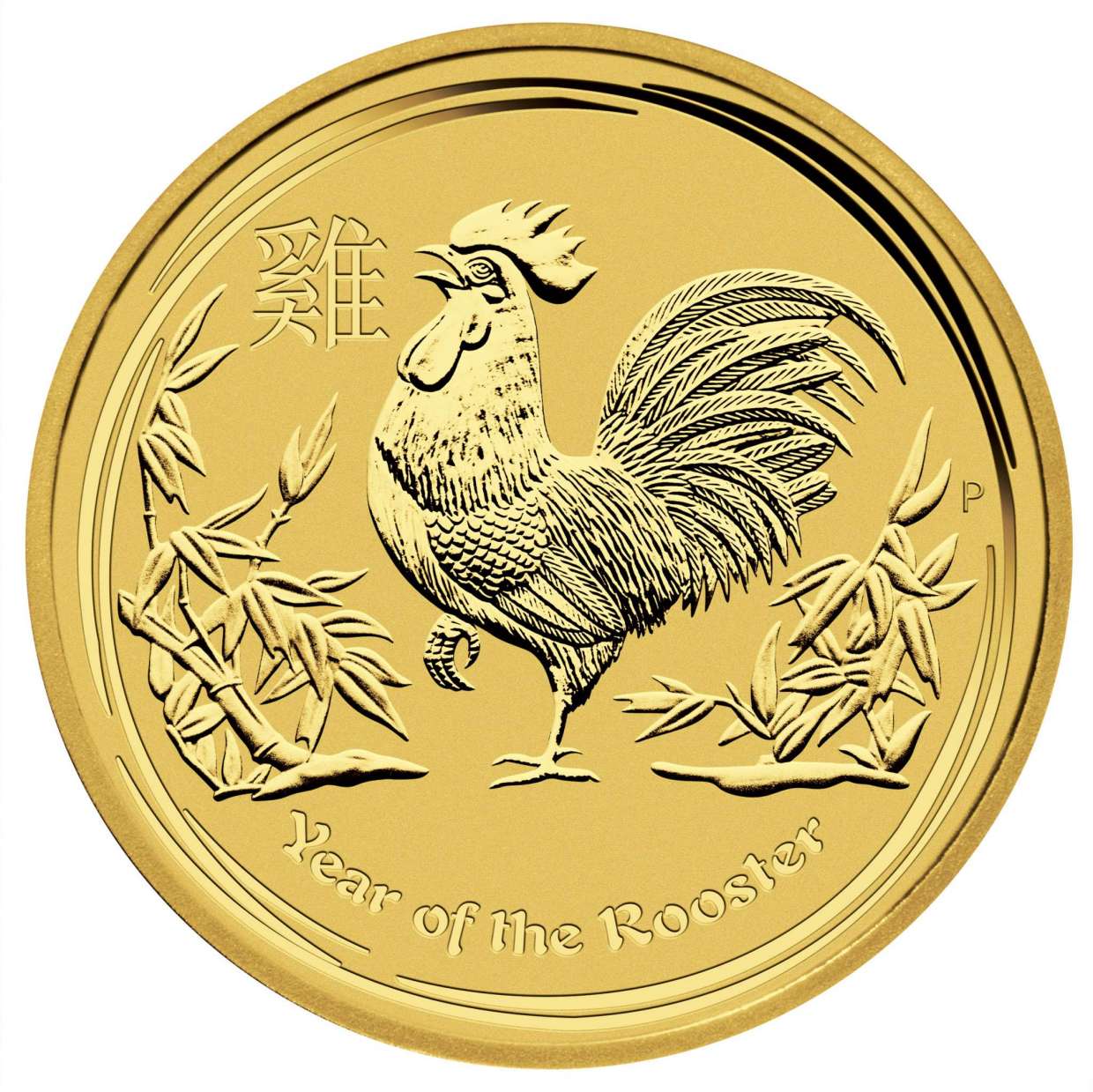 The Rooster is the 10th animal in the Chinese lunar cycle and the Year of the Rooster officially begins on the 28th January 2017 and lasts until 15 February 2018. There are five different variations of Rooster; wood, fire, earth, gold and water. 2017 will be the Fire Rooster. It is said that people born in the Year of the Rooster are highly motivated, confident, hardworking and punctual, extrovert, charming and very sociable; they love a party and enjoy being the centre of attention. Roosters tend to be active and enjoy looking their best.

The reverse of the gold coin bears the cockerel strutting through leafy foliage with the Chinese Year of the Rooster symbol in the field to the left and the legend ‘YEAR OF THE ROOSTER’ at the base of the coin.

The reverse design of the silver lunar coin features the male cockerel in his full glory with his hen and three chicks and tufts of grass. Leaves are shown at the top of the coin with the Chinese Year of the Rooster symbol to the left in the field. The legend ‘YEAR OF THE ROOSTER’ is placed at the base of the coin.

The lunar range is due for release on 12 September 2016 and will be available for purchase after that date. Please note that different sizes are staggered for release over a number of months. We will keep you updated with expected delivery dates on our website.

There is a loyal band of collectors for the Australian Koala coins. Struck in 99.9 pure silver, the 2017 design by Tom Vaughan features a seated koala in a meadow with trees, leaves and a hilly landscape. Inscriptions on the coin include ‘AUSTRALIAN KOALA’, the date ‘2017’, ‘999 SILVER’ and the designer’s initials TV. The 2017 Koala will be issued in weights of 1oz, 10oz and 1kg - Due for release 9 January 2017 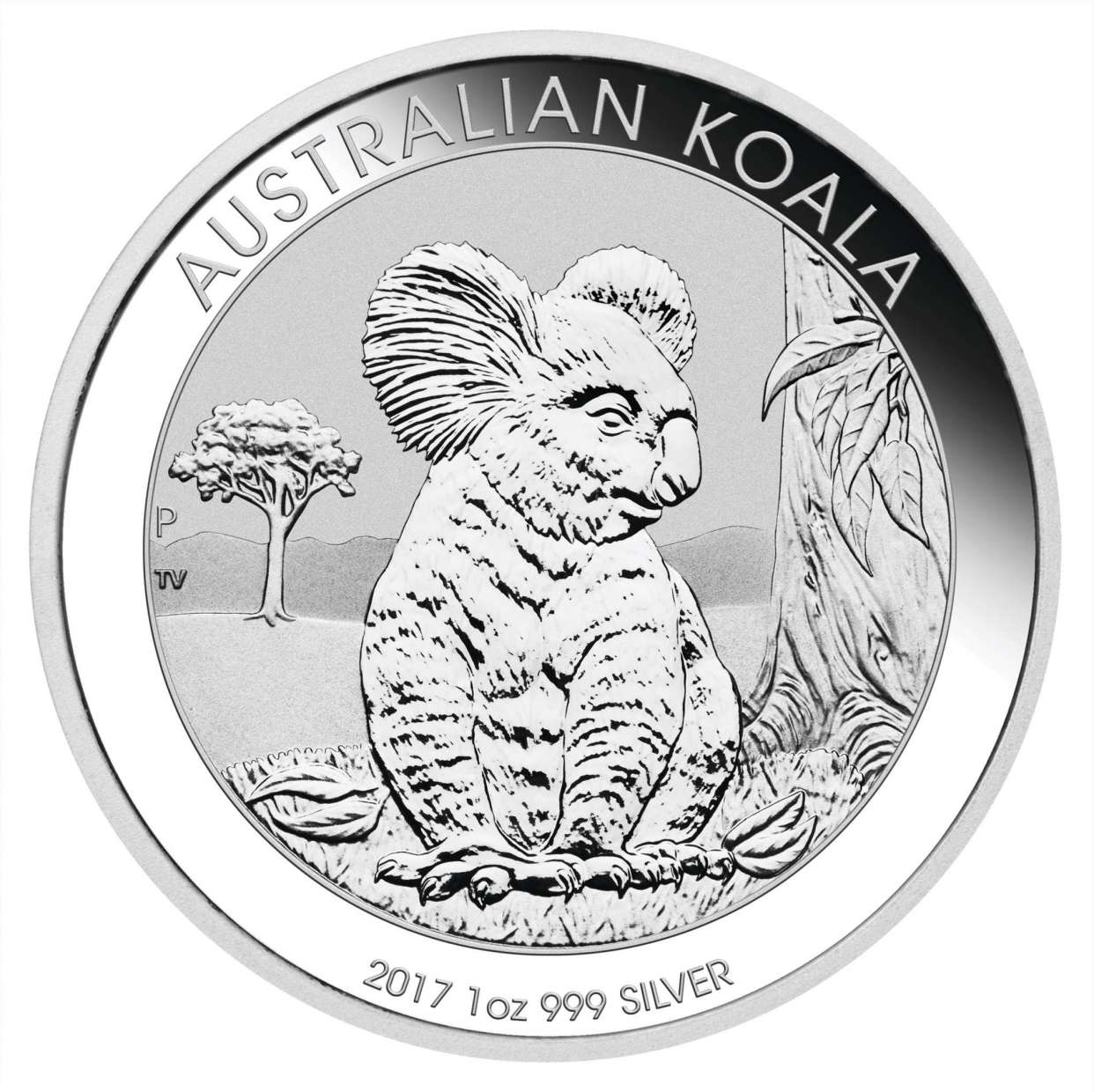 Designed by Perth Mint engraver, Natasha Muhl, the 2017 Kookaburra features two Kookaburras seated atop a wooden fence studded with nails. The Kookaburra is the largest of the kingfisher family and is identified with the outback in Australia. Struck in 99.9 silver fineness, the coin bears the inscriptions ‘AUSTRALIAN KOOKABURRA’, the date ‘2017’, ‘999 SILVER’ together with the weight of the coin and the engraver’s initials NM - Due for release 14 November 2016 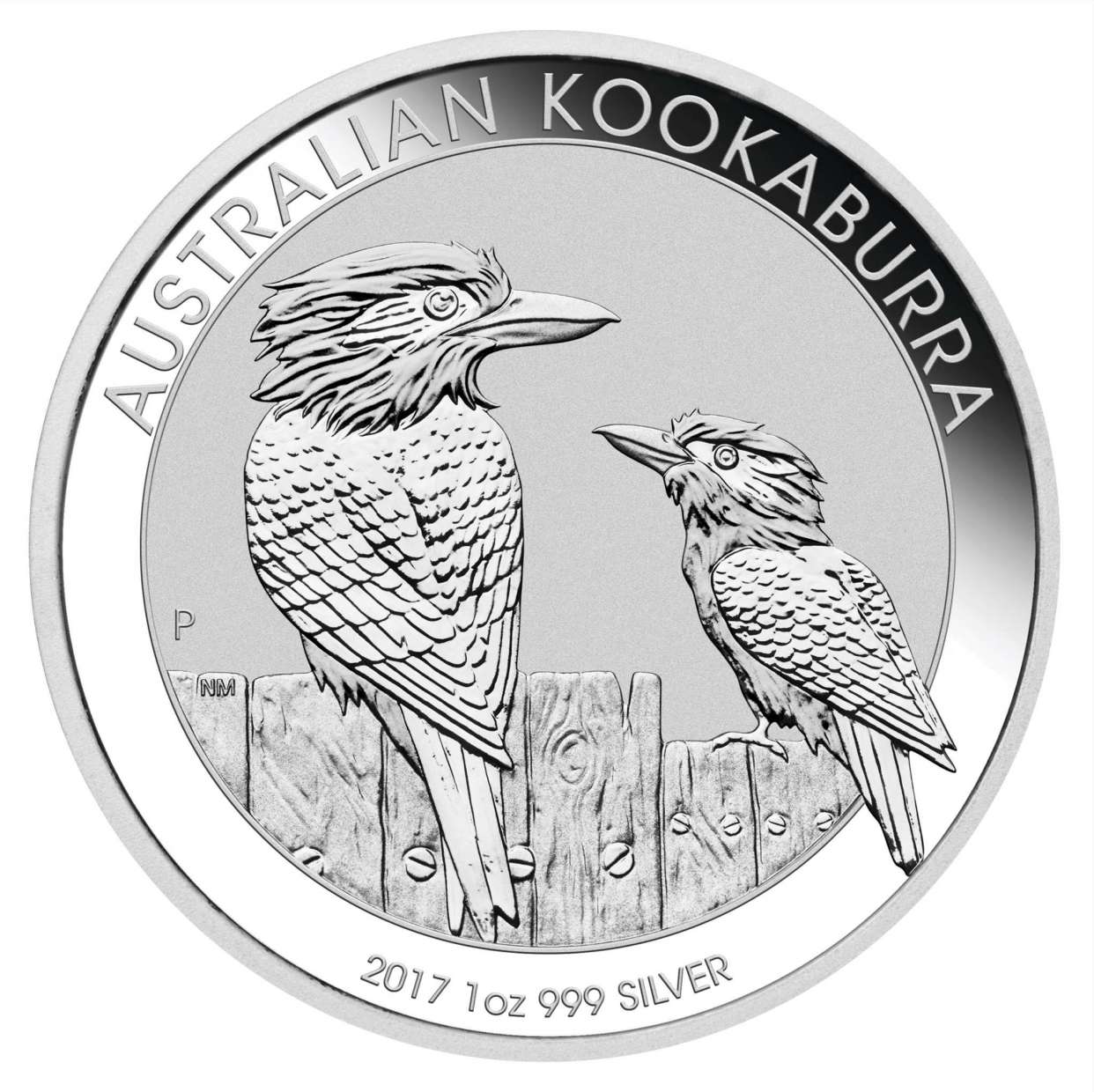 Previously known as the Nugget. The 2017 Australian Kangaroo gold bullion coins feature a design of a leaping kangaroo against foliage and a rocky landscape by Jennifer McKenna. The coin bears the inscriptions ‘AUSTRALIAN KANGAROO’, the date ‘2017’, ‘9999 GOLD’ together with the weight of the coin and the engraver’s initials ‘JM’ -  due for release 10 October 2016. 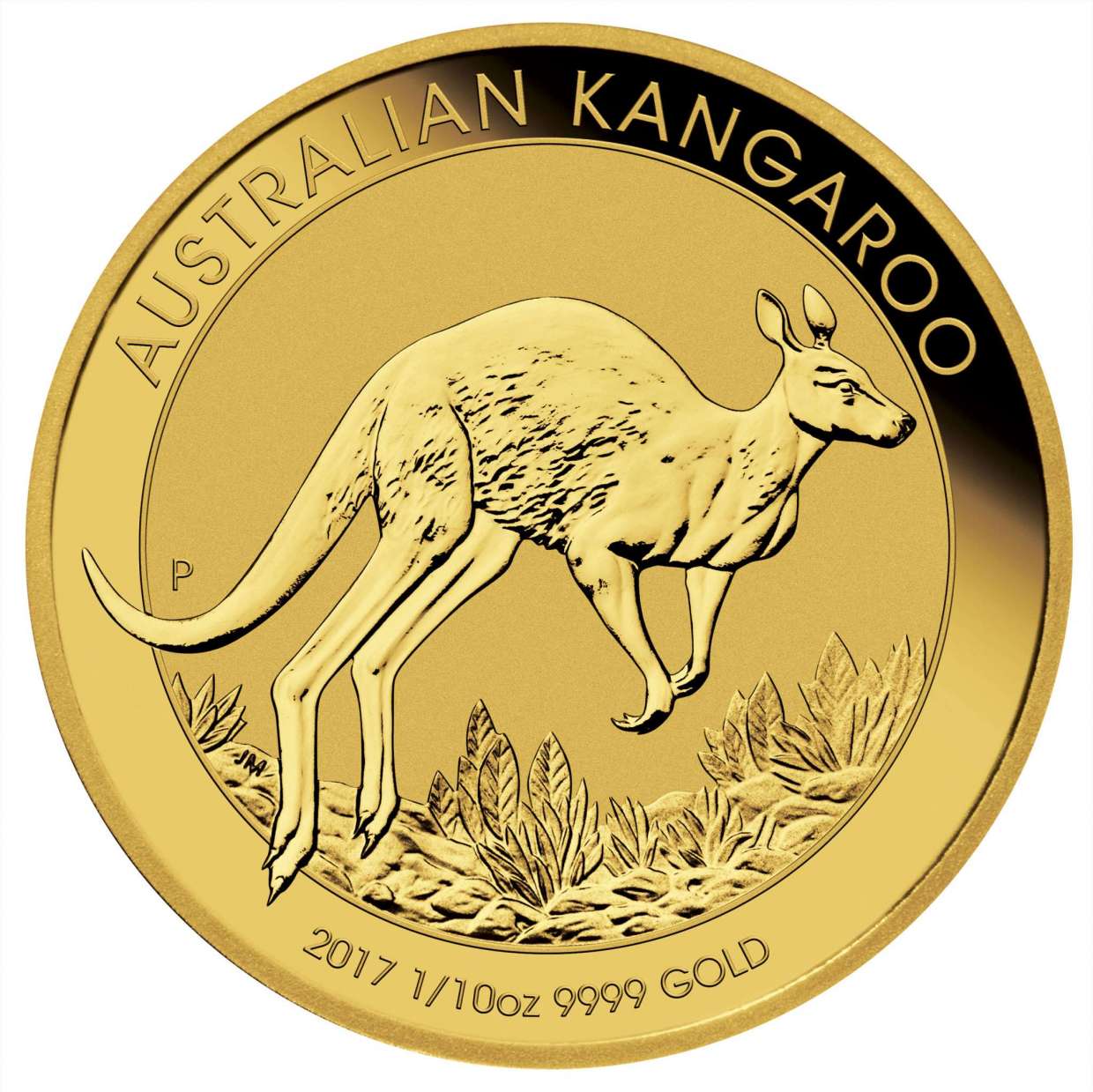 Introduced in 2016, the Australian silver 1oz Kangaroo coin struck in 99.99 fineness, known as the four nines, proved to be one of the world’s most popular bullion coins. Each coin features the Perth Mint's authentication feature - a micro-laser engraved letter ‘A’ which is within the second A of AUSTRALIA. It is only detectable under a magnifying glass.

The Perth Mint's Kangaroo was in high demand in 2016, we are sure that the 2017 coin will gain a larger market share - this is a bullion coin to watch!

The silver Kangaroo is issued specifically as a low premium bullion coin and is ideal for investors who want to combine a high quality product at a highly competitive price – this makes them our lowest priced Australian 1oz silver coin. Packed in tubes of 25 coins, it is possible to purchase 250 coins and receive a free ‘monster’ storage box - due for release 14 November 2016 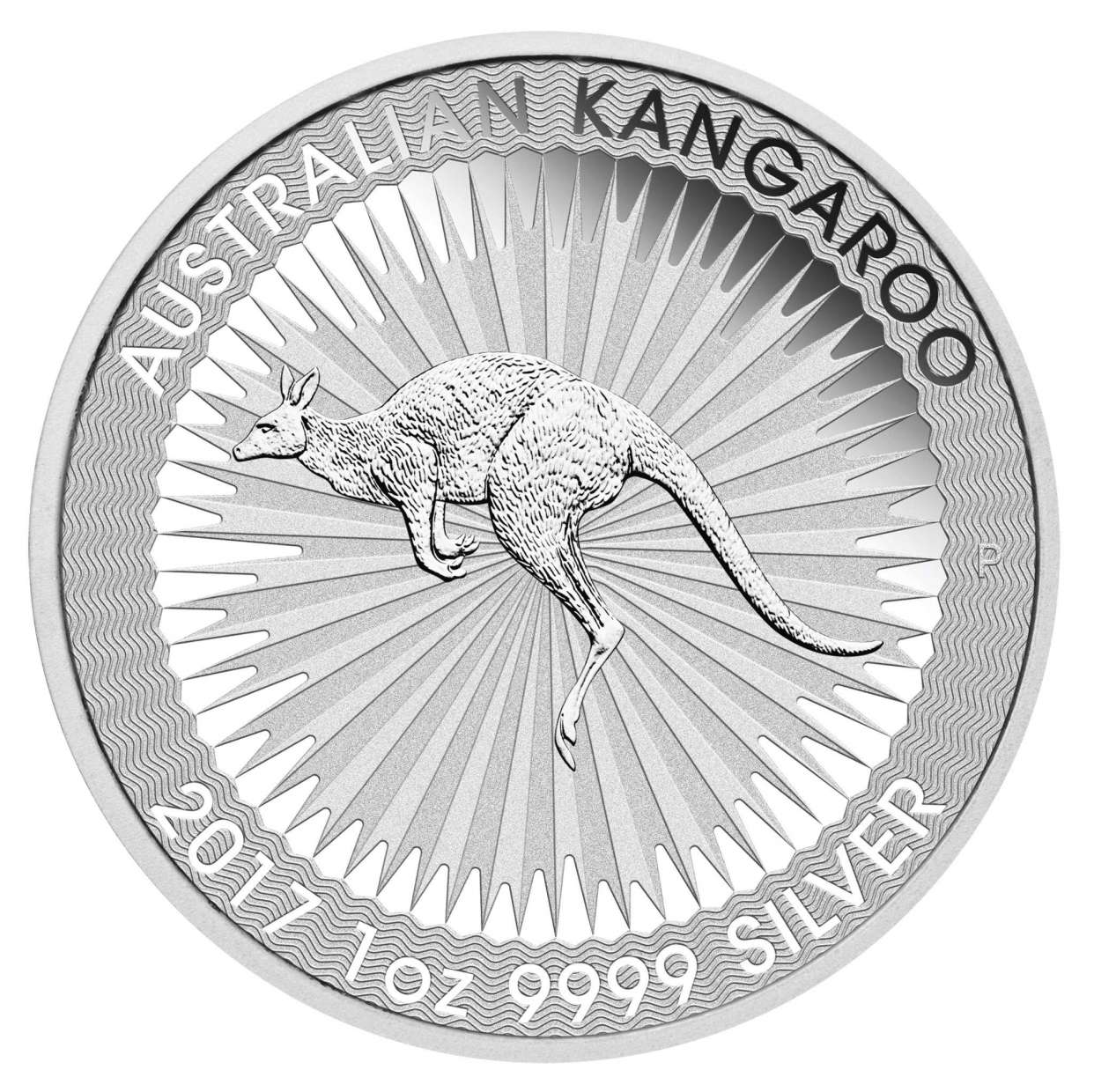 All of the 2017 bullion coins feature the fourth definitive coin portrait of Queen Elizabeth II by Ian Rank-Broadley.

What do you think about the 2017 Australian designs? Have they lived up to your expectations? Let us know what you think – your opinions matter to us.