The 100th Anniversary of the House of Windsor Crown

The 100th Anniversary of the House of Windsor Crown

On the 17 July 2017, the Royal Family celebrate the 100th Anniversary of the House of Windsor.

A commemorative five pound crown has been commissioned to mark this centenary. The obverse bears the fifth definitive UK coin portrait of Elizabeth II by Jody Clark. The reverse has been designed by Timothy Noad who is the Heraldic Painter at Her Majesty's College of Arms and is the official Scribe and Illuminator to the House of Lords. His engraving of the heraldic badge of the House of Windsor  is set within the inscription CENTENARY OF THE HOUSE OF WINDSOR 2017.

The edge of the coin is incuse inscribed with CHRISTENING OF A DYNASTY. 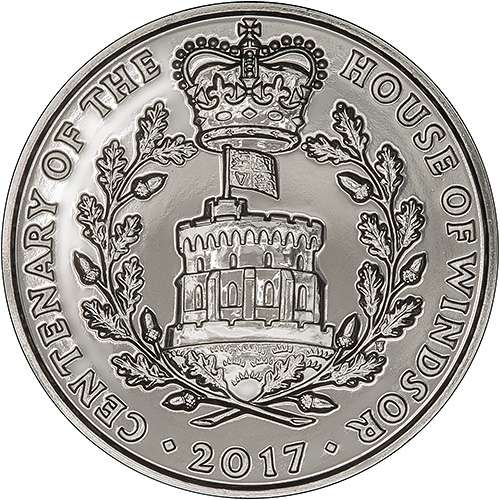 Introducing the House of Windsor

During the First World War, anti-German sentiment extended to the British Royal Family when it was realised that King George V was the first cousin of the German Emperor, Wilhelm II.

The war had affected the every corner of the United Kingdom, from the humble working classes to the aristocracy. The government ran a huge propaganda campaign with a recruitment drive where every able-bodied man was expected to enlist and fight for his country. In the words of Lord Kitchener 'Your Country Needs You!'. Posters abounded with statements such as 'Women of Britain Say Go!' and 'Daddy, What Did You Do In the War', it was seen as the right thing to do, to join the battle against the Germans.

Whilst the men fought the German enemy, women stepped into their jobs to keep Britain moving. Families, streets and towns were decimated as the men went to fight on the Front. Families and friends were encouraged to sign up together and fight together as Pal's Battallions. Unfortunately, this also meant that if a Battalion was attacked few men returned to their families, many of those that did were badly injured and mentally scarred by what they had experienced. Rationing of food and fuel was introduced in Britain. Life was pared of luxuries, it was tough and suspicion was rife. Especially against anything that was German.

It was felt against the Royal Family's name of Saxe-Coburg-Gotha was incongruous with the patriotism shown by the millions who's lives had been changed by the harshness of the war.

When Queen Victoria married Prince Albert, she adopted her husband's family name of Saxe-Coburg-Gotha. King George V's Teutonic heritage had German roots that extended back to King George I and the House of Hanover. It was deemed prudent that a major change needed to take place. On the 17 July 1917, by royal proclamation of King George V, the royal family renounced the name of Saxe-Coburg-Gotha to become a new dynasty; the House of Windsor, after the 11th century Windsor castle.

The House of Windsor Heraldic Badge

The heraldic badge of the House of Windsor combines three elements which embodies England, Heritage and Imperialism. 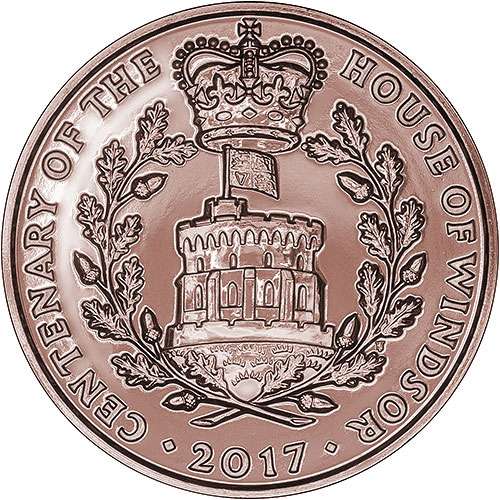 The 2017 100th Anniversary of the House of Windsor Crown is currently available as part of the 2017 UK Annual Brilliant Uncirculated Coin Set.

The individual coins will be released at a later date. We will be stocking the House of Windsor crown in three finishes; Brilliant Uncirculated in Folder, Silver Proof and Gold Proof. The proof coins come in a presentation box with a certificate of authenticity. Sign up to our Mailing List to be the first to be notified when the individual coins may be ordered and are in stock.