Tories Win Their Biggest Majority Since 1987

The pre-election polls were proved correct as the Conservative Party secured a landslide 80-seat majority and left both the Labour Party and Liberal Democrats reeling. Markets were buoyed by this result as Sterling climbed to a 19-month high against the US dollar, with one pound now worth $1.3387. Elsewhere in the UK, the Scottish Nationalists (SNP) swept to a landslide north of the border, securing 48 out of 59 seats in Scotland, and in Northern Ireland both the Democratic Unionists (DUP) and Sinn Fein had their respective vote shares reduced, with the DUP in particular suffering some bruising losses and losing their “kingmaker” status in Parliament.

Now that Conservative leader Alexander "Boris" Johnson has a comfortable majority to work with, he should be able to pass his UK-EU withdrawal deal though the House of Commons and we can expect to begin our process of leaving the EU in January 2020. Mr Johnson’s government now faces a race against time to secure a new trade relationship with the EU and insiders have stated that the UK can expect a tough stance from the European Commission. What happens if these negotiations do not go smoothly? Has the government got a “Plan B”? Mr Johnson has ruled out extending the transition phase and has not speculated what will happen if a new trading relationship is not agreed.

Domestic problems still linger in the background – the SNP is pushing for another independence referendum in Scotland and unionists in Northern Ireland are deeply unhappy with potential customs checks between mainland Britain and Ulster. How Mr Johnson intends to square these circles remains to be seen; the new Conservative government will have a delicate balancing act to follow if it wishes to preserve the Union. Expectations are also now on the new government to deliver its manifesto commitments such as increasing investment in the NHS, hiring more police officers and construction of a new railway between Leeds and Manchester.

Where Does this Leave Gold?

This election result has given sterling a boost. Clear spikes can be seen on exchange charts at the time of the release of the exit poll at 10pm last night: 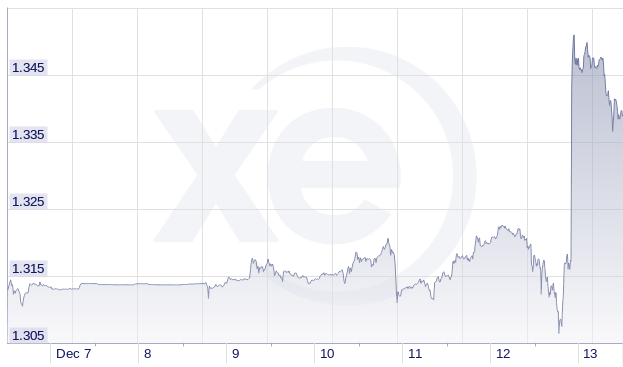 Gold is primarily priced in US dollars so if Sterling strengthens against the US dollar then this translates into a cheaper gold price in Sterling. Gold is currently trading at £1098.88 per troy ounce (correct at the time of writing) which is a drop of 2.77% over the last 24 hours. There may be an initial calm as the dust settles on this election result, but the prospect of unpredictable trade negotiations next year could impact the Sterling price of gold significantly.

Throughout the country there will be those who will be pleased with the election result this morning and there will be those who will be disappointed, and Chards is no different. However, Mr Johnson and his party have earned a mandate and they now enjoy a majority in the House of Commons. We cannot stress how vitally important it is that a robust and organised opposition holds the government to account on its promises, which at this time is needed more than ever. Not opposition for the sake of opposition, but scrutinising government actions with an objective mindset, providing credible alternatives and co-operating in areas of shared interest. It is time policymakers took responsibility for their promises and actions in order to earn back the trust of the general public again.