Could this rare £2 error coin be the most exciting find this decade? Check your coins to see if you have a similar error coin. It's time to check your pockets! Empty the kid's piggy banks! Check the back of the sofa!

Mr C, a collector in the North of England has had a lucky find in his change. Thinking it was one of the older single metal £2 coins, he had added it to a box of coins...to be sorted one day.  With an influx of articles about rare coins in the media over the last few years, Mr C decided to take a closer look at his own coins. He discovered that in amongst his coins there was a coin which looked very unusual indeed. A 2007 Technology £2 coin which wasn't bi-metallic. 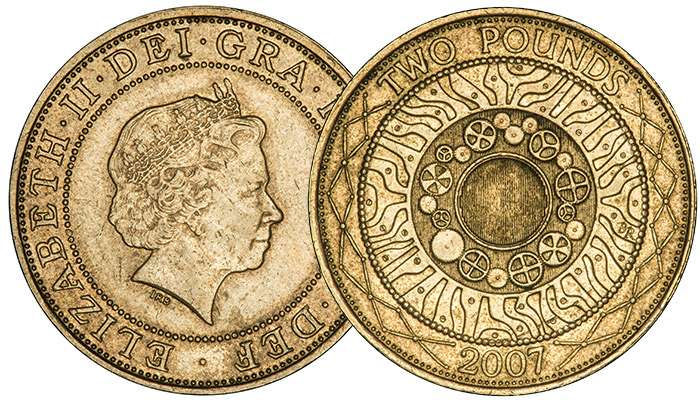 His initial thoughts were that the coin could have been a forgery. This would have been our first thought too. However, on closer inspection, the size and weight were the same as other £2 coins but there was no sign of any join for a central inner disc. 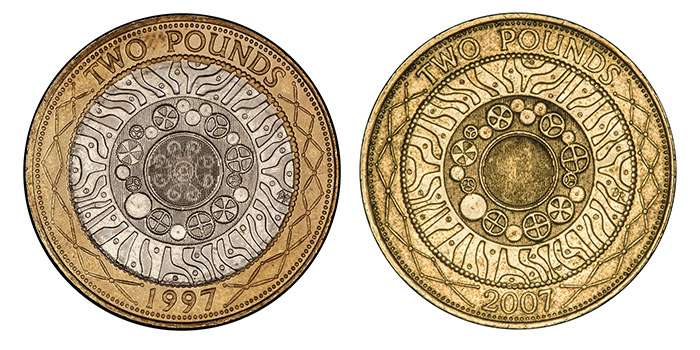 Two pound coins are made using two components - an outer band of nickel-brass with an inner disc of cupro-nickel. This comparison shows that the 2007 error coin has no inner disc. There is no sign of any piercing to allow for a centre disc to be inserted. On a typical coin the inner disc is placed inside the outer band and when the coin is struck the pressure merges the two parts together securely

Technical Analysis Of A Coin

We tested the 2007 Technology striking error coin on our Niton DXL Precious Metal Analyser. You can see a comparison of the test results for a 1986 Commonwealth Games £2, a 1997 Technology £2 and the error coin in the table below.

Deciding that it would be worth getting an expert opinion. Mr C contacted The Royal Mint Museum and sent the coin to Chris Barker, Assistant Curator for authentication. Upon receipt of the coin, Barker wrote saying that the coin did appear to be struck in nickel brass and that the coin would be submitted for further analysis. 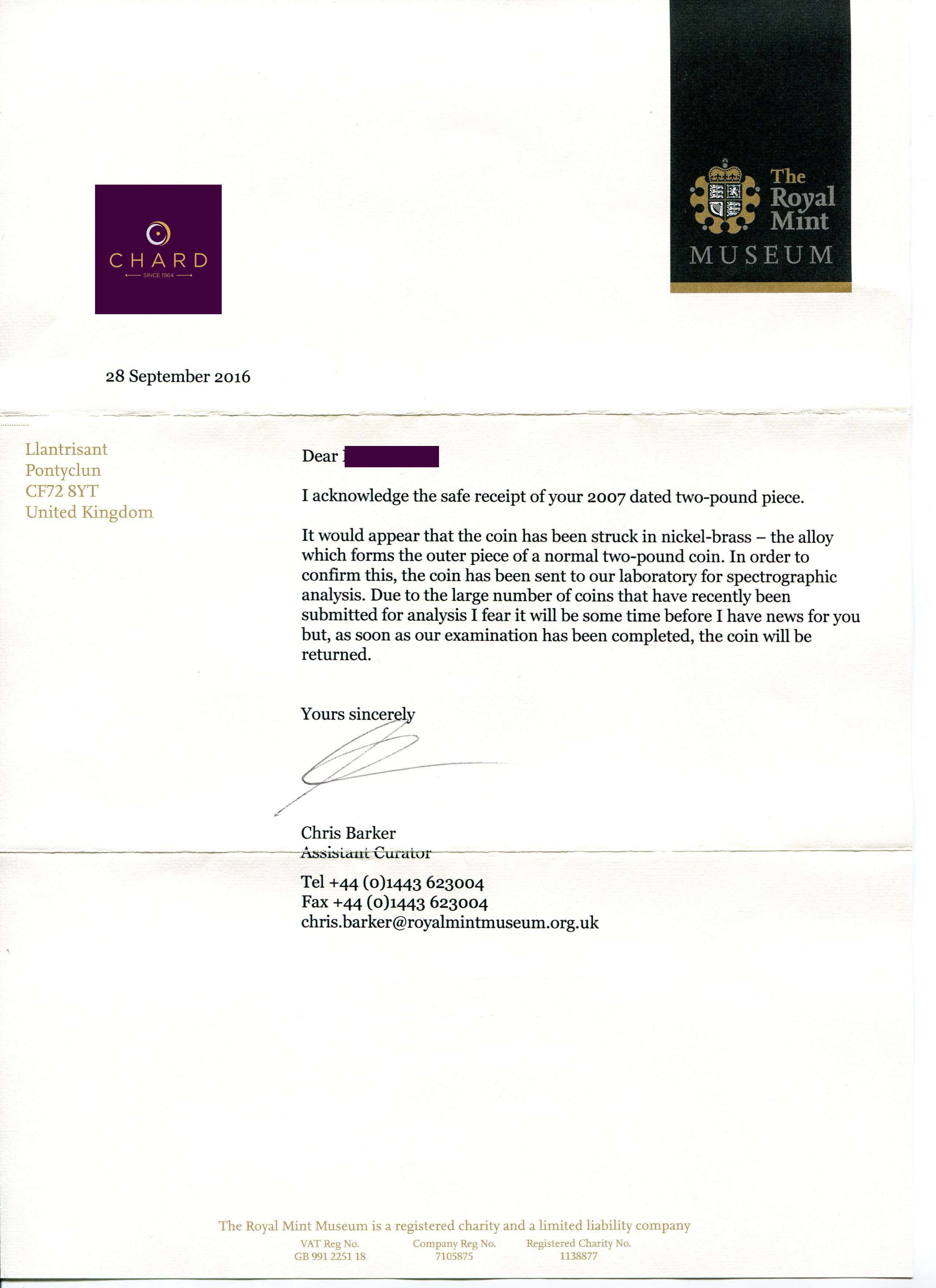 Letter dated 26 September 2016 from The Royal Mint acknowledging receipt. Initial inspection showed that the 2007 £2 coin had been struck in nickel brass.

On the 6 April, Chris Barker, wrote back verifying that the 2007 £2 coin was indeed a striking error.  Using the dies for the 2007 Technology two pound coin, an unpierced nickel-brass blank had been struck between the two dies.  In an email, it was mentioned that Barker had only seen 4-5 similar coins but never a £2 during his time at The Royal Mint. 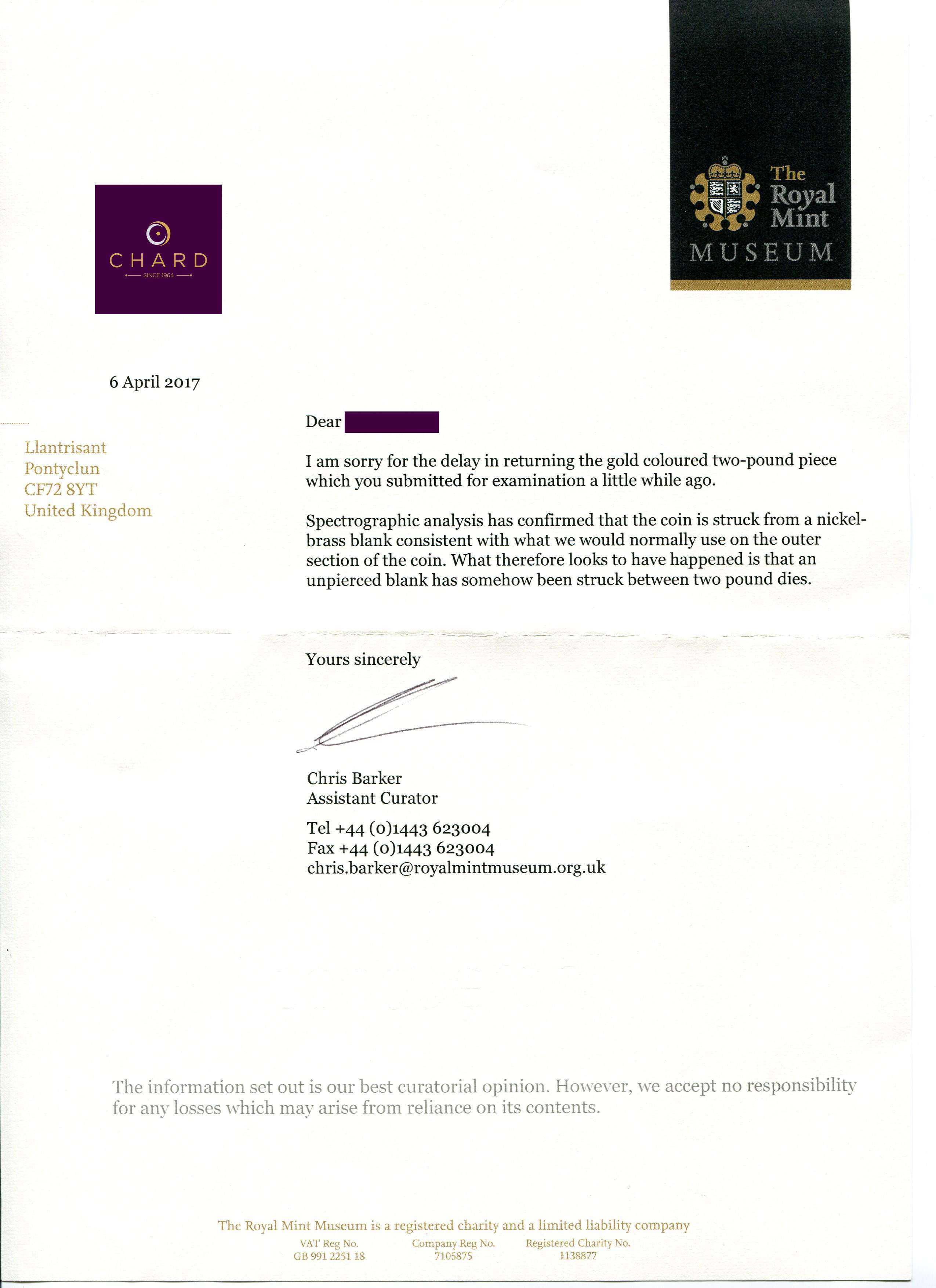 Letter dated 6 April 2017 from the Royal Mint confirming that the 2007 £2 coin was a striking error coin.

We found it rather surprising to see that it took the Royal Mint Museum 7 months to do the analysis and reply. It only takes us a few minutes to analyse a coin and get the results, although we do make a small charge to do so.

So, How Much Is It Worth?

Well, it all depends on how much someone is prepared to pay for it. If several collectors enter a bidding war, it could result in a small fortune.

Over the last decade, a small number of error coins have been discovered. These rare striking errors are highly sought after and have achieved high prices in both private sales and auctions.

We're looking forward to seeing how much Mr C's rare error coin will sell for. We would not be surprised to see it achieve in excess of £1,300 as numismatists who specialise in striking errors seek to add this special coin to their collection.