Fools Gold: Who's the Greater Fool?

The success of the precious metal markets have seen an increase in the number of fake products being sold online. As we have seen some of these products brought into our showroom by unwitting buyers, we thought we would address this in order to prevent others from making the same foolish error. 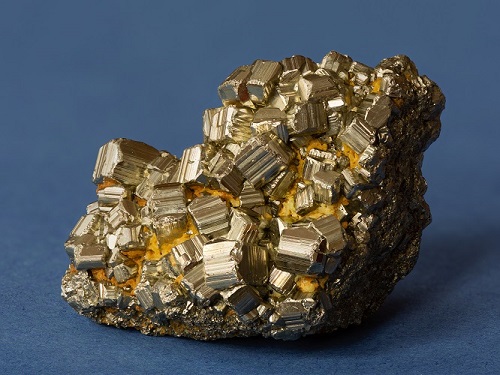 Rise of the Machines

There is little doubting the success of e-commerce.  Thanks to websites such as eBay and Amazon, it has become easier to find particular products from the comfort of your own home, rather than having to trawl the high streets for hours and hours in the hopes of finding a bargain or two. Even high street stores have had to improve their operations to be able to compete in the growing e-commerce industry, or otherwise face closure. E-commerce was given a further boost as the Covid panic took hold, with Amazon reaching a 5% increase in UK market share since last year taking its total up to 35%, according to a study by Wunderman Thompson Commerce.

That being said, online sales platforms don’t have the knowledge and expertise to deal with the innumerable fake products being used on their website. Having faceless, nameless avatars make it all too easy for naïve and oblivious buyers to be duped into purchasing fake, damaged, or even non-existent products.  Products which would see any serious trader laughed out of business.

We’ve seen it all too often as customers try to sell their “genuine” products that they’ve recently bought online, only to find when appraised by an expert, they turn out to be either fakes or forgeries. What’s even more bewildering is when someone who buys from an established dealer but still manages to get duped on eBay, as was reported in the Telegraph earlier this year.

Recently, we received 3 one-ounce gold bars from a customer who had purchased them from eBay all on separate occasions, which were all quite obviously fake.  All came in packaging similar to the one shown (which was one of the fakes we received). As can be seen in the right-hand image, it has a serial number and even a stated 99.99% purity. When we used our Niton tester, over 75% was copper with much of the rest taken up by zinc, silver and nickel.

When we looked into what was actually being sold online, and we were surprised to see how many different products there were, with prices ranging from under £5 up to around £850.

On eBay alone we found well over 1000 items under a search for “gold bullion bars” most with some dubious asking or bidding price and even more dubious descriptions. Arguably, the most honest ad was for the “100% BRASS Fake Fine 999.9 GOLD bullion Bar paper weight 6" heavy polished"! (Honesty like this seems to be rarer than a gold bar by eBay’s standards!)

To give an example, this is just ONE of the items for sale. 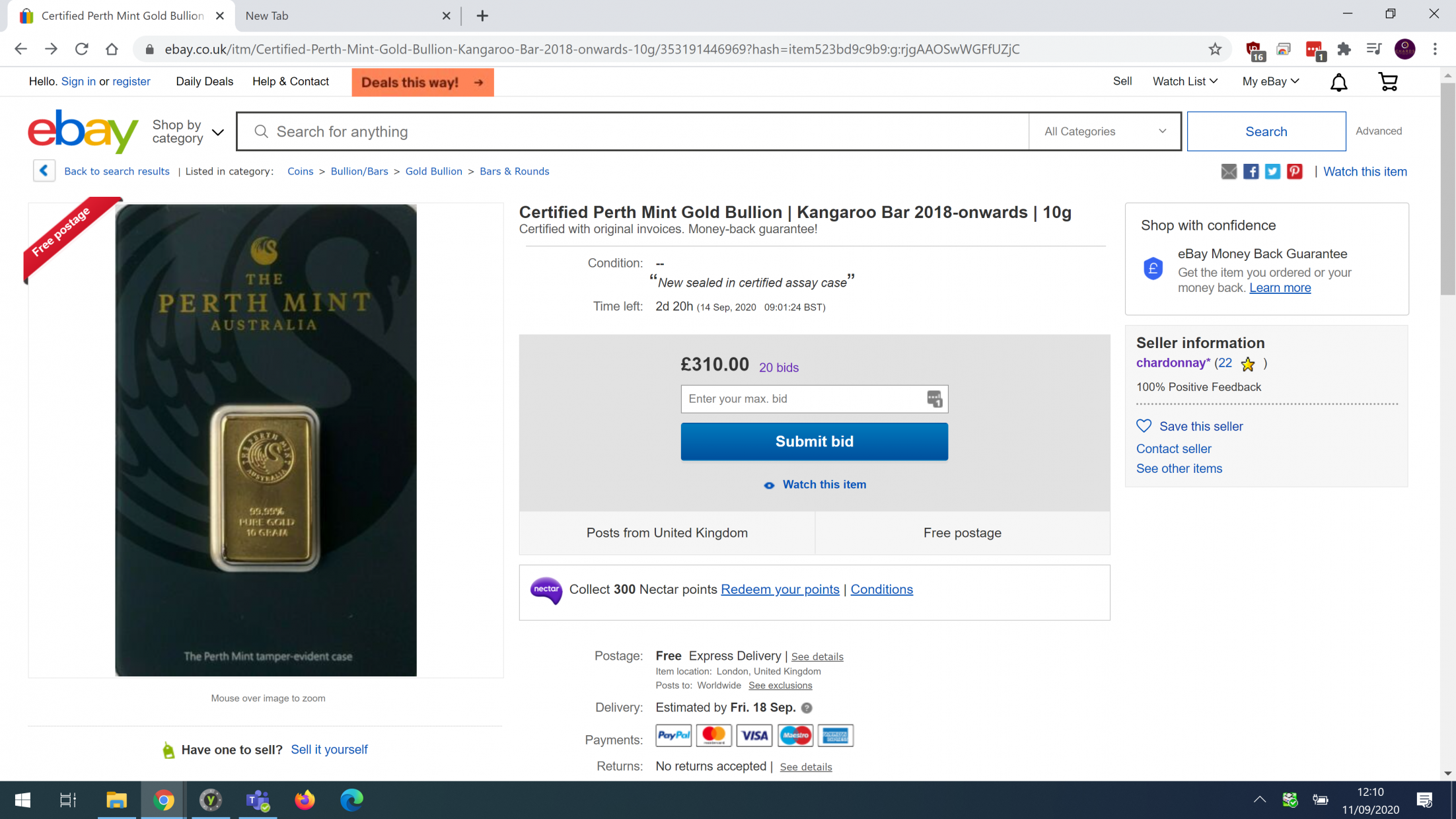 The description seems genuine enough! It’s “sealed in a certified assay case”, they even give a “GURARANTEE” (huh?) that the bar is genuine and is purchased from a reputable dealer. Plus, with free postage and today’s spot price at around £180.00 more than the current bid price, the lucky owner could make a tidy profit!! Unless you take another minute or two to look further. 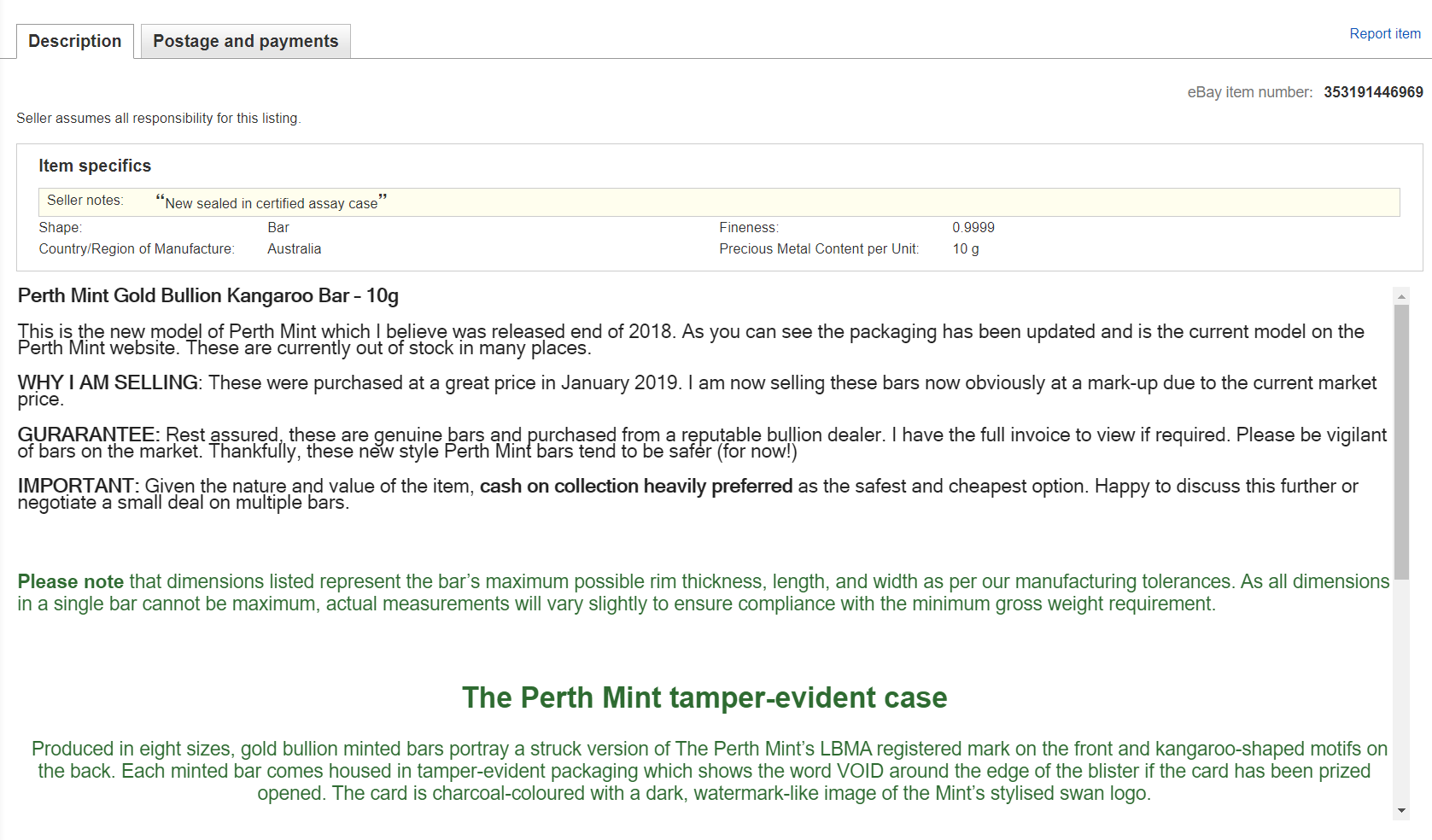 The photograph is not of the product for sale and is most likely taken from google images. There is no photograph of the reverse which would show a certificate number. There IS a photo in the description further down but this is labelled “for illustration purposes only” so again, it is not a photo of the product for sale. It’s nice of chardonnay* to advise us to be vigilant, but “cash on collection heavily preferred” suggests that the original invoices aren’t worth the paper they’re printed on.

It raises a number of questions as to why anyone would buy or sell such a valuable product online as opposed to an established dealer? Sure, dealers (including us) will pay a discount on the spot price, but when taking into account online listing fee fraudsters on eBay!! es, selling fees of up to 10%, 3rd party transaction fees etc., they’re most likely going to lose out. By selling to any reputable dealer in the UK those fees would be cut in half, so why anybody would be stupid enough to sell on such an expensive and questionable platform, frankly, boggles the mind!

For buyers, some of the same fees apply, however there are the more obvious risks. The lack of transparency, makes fraud all the more likely. Simple photos of a product DO NOT guarantee a genuine product. Examining some of the listed products, most do not show the reverse of the certificate or the serial number, which gives some idea of the sellers' intentions. Others make claims to testing with a magnet, while others don’t.  Explanations of how they acquired the item seem to raise alarm bells, as if being “left it in a will” or “being given it as a birthday present” should give the impression of the owner’s “ignorance” for a bargain hunter to swoop in and make a huge profit, only to find out later it was a scam. It’s not a stretch to say that many of these buyers are driven by either greed, fear or stupidity. Greed, in that they think they can make a quick buck. Fear, in that they miss out on a quick buck. Or stupidity, in that they are too naïve or lazy to actually do their own research.

So, who is the bigger fool? Someone who sells gold on eBay or someone who buys gold on eBay? This is rhetorical, of course, as we’ll never know. A fool and his money are easily parted. If that's the being the case, maybe some of these items would be of interest?

What we want to stress is that eBay, AliExpress, etc. are no place to be buying and selling gold. There are checks you can do to reduce the risks of fraud such as whether the buyer or seller has sold items before, but even the online ratings can be manipulated.

Of course, there are checks you can do to reduce the risks of fraud such as whether the buyer or seller has sold items before, although even the online ratings can be manipulated.

The best way to avoid being taken for a fool is to use an established dealer. We have over 55 years of experience in dealing with gold and silver and that’s probably 55 more than many of the fraudsters we've seen on eBay!!

You may be interested in our precious metals and coin news section.

See our gold guides and silver guides for more information