Britannia silver is comprised of 95.84% silver and the balance usually made up with copper. It is not quite pure silver! 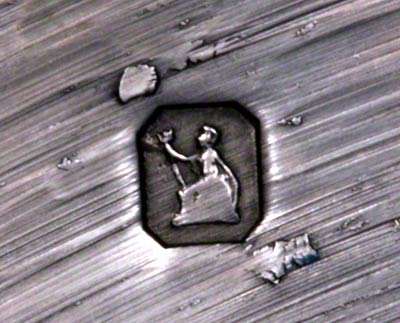 The widely recognised Britannia figure was introduced as the hallmark for the .958 fineness, and the 'lions head erased' introduced for the Worshipful Company of Goldsmiths mark. Silversmiths were required to register a new makers mark, which was the first two letters of their surname, as opposed to their initials of their forename and surname, single initial or a previously used device.

The Britannia Silver Standard was softer, less robust and more expensive, and with this in mind many silversmiths were in favour of the re-introduction of sterling silver. There were, however, other silversmiths, with a French religious origin (Huguenots) who were familiar with and in favour of Britannia silver. As the French used a higher standard of silver (95%) it meant that Britannia silver could be exported to France, whereas sterling silver could not as it was below the standard authorised by France.

In 1720 sterling silver and its hallmarks were reintroduced with Britannia silver remaining in use as a voluntary alternative. In 1739, plate workers had to destroy their existing marks and create new ones using the initials of their Christian name and surname (different characters from those previously used).

There was a revival in the use of Britannia silver for antique items during the late Victorian years, Edward VII years, George V years, and the 1960s and 1970s. 1999 saw the hallmarking system change in which Britannia silver was to be marked by its millesimal fineness (958) and the Britannia mark being of optional use.

You can find more information about Britannia on our Britannia home page.

Please follow the links below to product pages if you are looking to buy silver: