One Ounce Gold Coins vs Other Fractional Sizes

The modern 1 ounce bullion coin has certainly been successful since South Africa invented the Krugerrand in 1967. It was a simple but brilliant piece of marketing.

There were two main reasons for the success of the Krugerrand. Firstly it was distributed at a very low premium over its intrinsic gold content. Major banks and international bullion dealers can buy Krugerrands from the South African Mint at only 3% of the spot price of gold bullion. Even allowing for shipping costs, insurance and dealers profits, they can be bought at between 4 and 10% over their gold content, making them an excellent and cheap way to buy gold.

Because gold is internationally quoted in troy ounces, the concept of a coin containing exactly one ounce of fine gold was a masterpiece of simplicity and effective marketing. Anybody can look at the gold price, and instantly be able to compare it with the bid and offer prices of a Krugerrand. Because of this, the Kruger has had a number of imitators including the Canadian Maple Leaf, the American Eagle, the Chinese Panda, the Austrian Philharmoniker, the British Britannia, the Australian Nugget, and others. 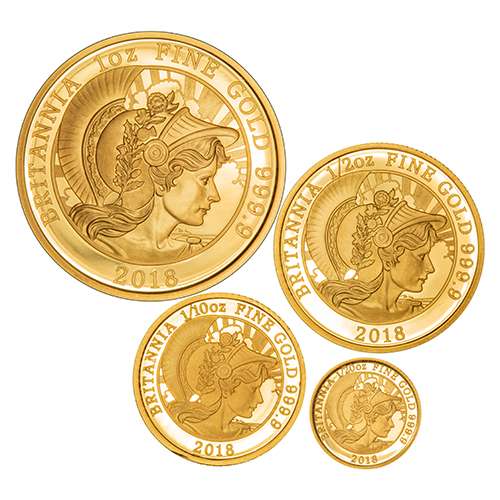 To fill demand for smaller sizes of coins, both for jewellery and for investment, all of the countries which issue one ounce bullion coins also produce fractional sizes of half ounce, quarter ounce and tenth ounce. Some also produce fifteenth ounce or twentieth ounce coins, but these are usually too expensive to be considered by any serious investor. The fractional sizes obviously cost almost as much per coin to produce as the larger one ounce coins, and therefore have a higher percentage compared with their gold value. They are all issued at increasingly high premiums as their size diminishes, and have not been as popular with investors as their large one ounce counterparts.

Australia also issues two ounce, ten ounce and one kilo bullion coins. As these are only marginally less expensive than their one ounce cousins, and are in less convenient sizes, they have not been as popular as the one ounce originals. So, they are mainly bought by collectors or as gift items. (One kilo gold nugget coins make great paperweights!). For this reason, most investors will not buy these larger coins.

In general it is cheaper to produce larger coins, but they are less convenient for the investor because they cannot easily be split. The same applies to gold bullion bars. One kilo bars are available at lower premiums, but smaller bars give more flexibility. It's difficult to chop off an ounce or so from a one kilo bar. One ounce coins seem to have won their place as the market favourite, as far as newly issued coins are concerned. However, this does overlook the existence of older "real" gold coins, which are often available at even more favourable prices than the "modern" one ounce coins.

Gold sovereigns were first issued for King Henry VII in 1489, and have been in their current format since 1817, giving them an interest and collectability in addition to their bullion value. They were originally used in circulation, and their face value of one pound was only just above their actual gold bullion value. After World War I, countries couldn't afford to retain gold in their coinage, and switched to banknotes. A similar thing happened to silver after World War II. Since then their value has usually exceeded their bullion value by a considerable margin. In the 1960's, we were selling single sovereigns at £4 each, quantity at £.50 each and buying at about £3.25 each. These prices represented about 30 to 40% over their bullion value. Many other countries had similar gold coins, and these are mainly still available at low percentage premiums over their gold content. Many of these coins will have been melted down over the years, making all these coins scarcer as time goes by. There are scarce dates among many of these issues, and they are very collectable. In addition, in most countries coins are used in jewellery, some more elegantly than others, and there is a steady demand for coins for this purpose. Naturally, many people wish to have a particular monarch or date of coin to wear or give. Gold coins are often given as gifts for special birthdays, weddings, christenings, and other events. Frequently, the givers are only too happy to pay extra to obtain a particular date or type of coin. There is an enduring and active market for such coins.

Most gold investors, quite sensibly, aim to pay as little premium over gold content as possible. However, most do not realise that some of these older "real" coins can be bought for the same premium as their less interesting modern counterparts. Occasionally, they can even be bought for less. This might seem paradoxical, so it pays to examine the reasons. Fashion constitutes part of the answer. Marketing and publicity adds to the explanation. It has become fashionable to deal in one ounce gold coins. Krugerrands generated much publicity in their early years, as did most other one ounce coins. No country gives publicity to its "second-hand" coins, which can often be bought at second-hand prices. Especially, when purchased in quantity. Given the extra price potential and rarity value inherent in older coins, it would be stupid to ignore them, especially at or around the same prices as for modern ones. Another advantage for sovereigns is that being smaller, approximating to a quarter ounce, they are an even more flexible purchase than one ounce coins.

The short answer is that real investors do buy real coins, at least the better informed, more serious ones.

Why Are Older Coins So Cheap?

We have already mentioned that they are not actively marketed like modern coins, but we believe that one of the main reasons is laziness on the part of investors. Perhaps we are being a little harsh, and we should say that older coins don't come in such convenient weights. Sovereigns for example weigh 7.98 grams each, are 22 carat, and if you care to calculate it, they contain 0.2353544 troy ounces of gold. It's obviously not quite as easy for most of us to compare the relative prices of sovereigns against the price of an ounce of gold, or against a one ounce gold coin. Although this might seem like an inconvenience, for the more motivated investor, it potentially represents extra value and greater investment potential.

British gold coins which are legal tender are exempt from CGT. These include sovereigns, half sovereigns, Britannias, fractional Britannias, and UK proof sets. In our opinion, this makes sovereigns a clear favourite, especially for any UK based investor.

Which Are the Best Buy?

The exact answer depends on a few factors, current market conditions, and size of purchase. At the time we created this page in 2000, for small quantities, Krugerrands were cheaper than sovereigns (in percentage terms relative to their gold content), but for purchases from about 5 or 10 ounces upwards, sovereigns become a better buy in our opinion. Updating this page in December 2017, there are better one-ounce gold coin buys: One Ounce Gold Coins Our Choice - Often these will be Krugerrands, but it could simply be whatever we have a surplus of at the time. We get to keep our stocks balanced, and you benefit from a lower premium. One Ounce Gold Britannias - these benefit from being CGT exempt.