The Story of the Shilling

Welcome to our page for a brief history of the British shilling.

We discuss origins, designs and denominations. Read on to find out more.......

Origin of the Shilling

The shilling was originally a unit of account dating back to Anglo-Saxon times. A shilling, worth twelve pence, was the value of a sheep in anglo-saxon times and larger value transactions were generally defined in terms of shillings. 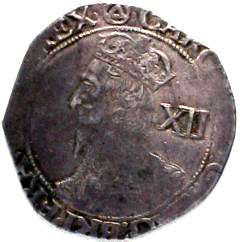 Interestingly, the value and purchasing power of a shilling remained more or less the same throughout the middle ages, all the way up until the Tudor period, when inflation started to eat into the purchasing power of the shilling. At around this time, the forerunner of the shilling coin, the testoon, was introduced in about 1487. It was worth twelve pence at the time, but...

The first shilling was issued in the reign of Edward VI in 1549, and was one of the first British coins to bear a date, at first in Roman numerals MDXLIX.

By 1551, shillings were struck which showed a value mark XII, denoting twelve pence. It is commonly but incorrectly believed that the "s" in £.s.d. stands for shilling. It stands in fact for "solidus", a Roman coin denomination.

On the milled coinage of Oliver Cromwell, and Charles II from 1662, the denomination or mark of value was omitted, and did not reappear until 1831 under George IV. It was omitted from 1887 to 1893 on the Victoria jubilee head issues, returned on the Victoria old head issues until the last issue at decimalisation.

From its inception, the reverse design was always a shield, except in the Commonwealth of England period, in which it changed to two shields. With the changeover to milled coinage in 1662, the design changed to four crowned cruciform shields, although the execution of this design changed throughout its lifetime. In 1878, under George III, the crowns were moved into the angles between the shields, and after the great recoinage of 1816, changed again to a large shield within a garter. Under George IV, there were two issues, one with a large crowned and garnished shield, then a shield in garter. 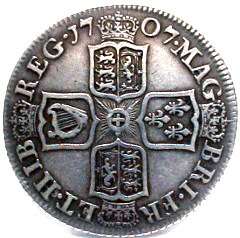 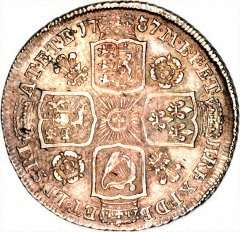 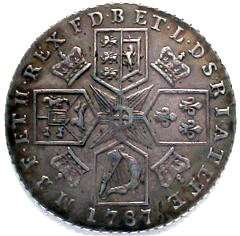 On the young head issues of Victoria, the reverse design changed to the value "ONE SHILLING" in two lines within a wreath, with a large crown above, but for the jubilee issues changed back to a shield in garter, and with her old head issues changed again to three shields within a garter. 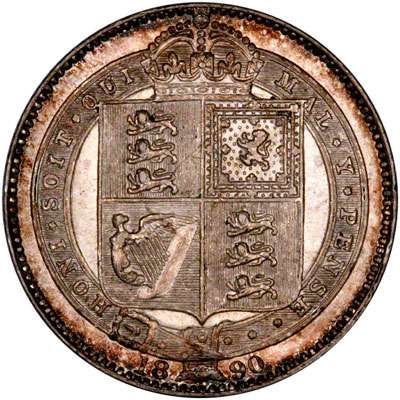 On the coronation of Edward VII in 1902, a new shilling design appeared, which was a lion guardant standing left on a crown, although we have seen this described incorrectly as a rampant lion. This design continued under George V, when a modified version of the same design was introduced. 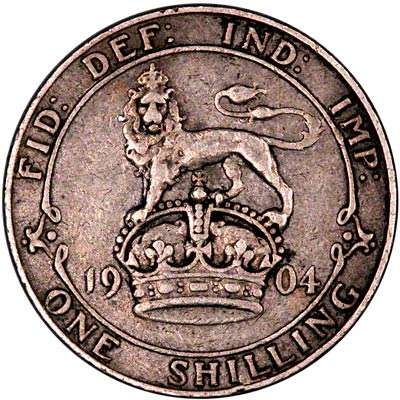 From the introduction of the George VI new designs, two separate shilling designs were issued, one with an "English" reverse, and on with a "Scottish" reverse. The English design features a lion standing on a crown, at either side there are two roses, the Scottish design features a lion seated on a smaller crown, at either side are a Saint Andrew's cross and a thistle. 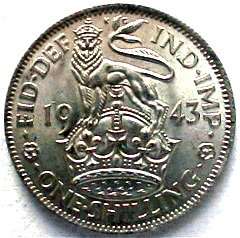 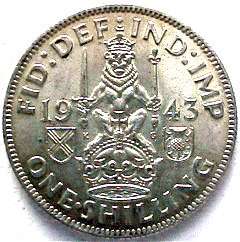 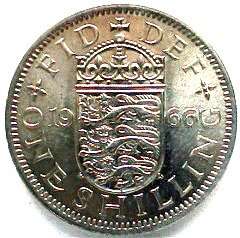 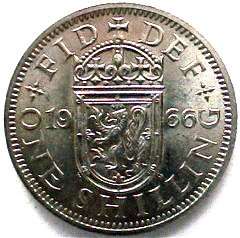 The shilling was obviously a successful coin denomination, because prior to decimalisation, our coinage system consisted of pounds, shillings, and pence. The shilling was produced until 1966, with a proof version being struck for inclusion in the "last £.s.d." coin set produced dated 1970, and continued in use until 1982.

Its decimal equivalent was five new pence, later five pence, so that it was one of the two coins which transposed naturally into an exact amount in the decimal system. From 1990, the size of the five pence coin was reduced from 25.39 to 18.00 millimetres,and its weight from 5.65 to 3.25 grams. The old size five pences and shillings were withdrawn shortly afterwards, so ending more than 400 years as a popular and successful denomination.