Most of the inscriptions on British coins is in Latin. We are frequently asked their meanings, and also where they are found.

Nemo Me Impune Lacessit, is the motto of the Order of the Thistle, and means "No one provokes me with impunity." 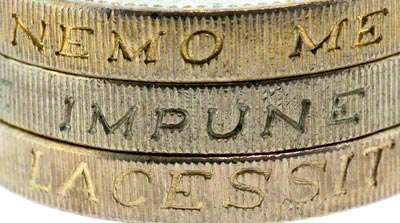 The Order of the Thistle

The date of the foundation of the Order is not known, although legend has it that it was founded in 809 when King Achaius made an alliance with the Emperor Charlemagne.

It is possible that the Order may have been founded by James III (1488-1513), who was responsible for changes in royal symbolism in Scotland, including the adoption of the thistle as the royal plant badge. It is said that James V bestowed the insignia of the 'Order of the Burr or Thissil' on Francis I of France in 1535.

Around the time of the Reformation, the Order was discontinued.

Although some kind of Scottish Order of chivalry existed in the fifteenth and sixteenth centuries, or even much earlier, it was James II (James VII of Scotland) who established the Order with a statutory foundation under new rules in 1687 - to reward Scottish peers who supported the king's political and religious aims. (One statute required that the robe should be 'powdered over with thistles of gold'; a robe from that period still survives, scattered with more than 250 applied thistle motifs.) The statutes stated that the Order was 'to continue to consist of the Sovereign and twelve Knights-Brethren in allusion to the Blessed Saviour and his Twelve Apostles'.

After James II (and VII)'s abdication in 1688, the Order fell into disuse once more until it was revived by Queen Anne in 1703 - the number of knights remained at 12. Despite the rebellions of 1715 and 1745, the Old and Young Pretenders (Prince James and Prince Charles 'Bonnie Prince Charlie') appointed Knights of the Thistle (and Garter) in their exiles. The early Hanoverian kings also made use of the Order to reward Scottish nobles who supported the Hanoverian and Protestant cause.

Interest in the Order revived when George IV wore the Thistle during his visit to Scotland in 1822. A statute of 1827 established the complement of Knights Brethren at 16, and in 1987 a statute enabled ladies to join the Order. (Extra knights may be created by special statute.) In 1962, King Olav V of Norway became the first foreigner to be admitted to the Order for over 200 years.

The patron saint of the Order is St Andrew (also the patron saint of Scotland), who appears on the Order's badge. The breast star of the Order, instituted by George I in 1714, consists of a silver saltire with a pointed ray between each of the arms of the cross: at the centre is a gold medallion contained in an enamelled representation of the thistle, surrounded by a green border on which the Order's motto is written in gold. The motto is 'Nemo me impune lacessit' (No one harms me with impunity).

The chapel for the Order was to be at the Palace of Holyroodhouse, where James II had issued instructions in 1687 for the Abbey Church to be converted into the Chapel Royal and the Chapel of the Order. However, the political situation deteriorated and, by the time it was ready for use in December 1688, the furnishings and the stalls of the Chapel had been destroyed by a rioting mob. It was not until 1911 that the Order had a chapel, adjacent to St Giles' Cathedral in Edinburgh, in which its services and ceremonies could be held. When practicable, and when there is to be the installation of a new knight, a service of the Order is held each year during the week spent by The Queen at Holyrood. 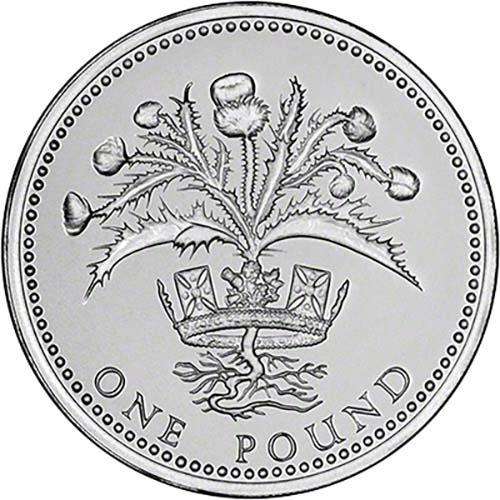 It has occured to us that there is a modern day equivalent, probably American is origin, which we seem to recall hearing in a number of US films. We are slightly reluctant to repeat it here in full, but are sure most readers wil be able to reconstruct it - "Don't F*** With Me".