Roses Denote Silver from the West of England Mines

There are, of course, roses on many other English or British coins, but here we concentrate on a rose or number of roses specifically intended as a provenance mark.

Roses as a Provenance Mark

In 1699 under William III, roses were placed in the angles between the shields on the reverses of silver coins, again denoting West of England mined silver. This continued until the reign of George II, the last year with roses being 1747. 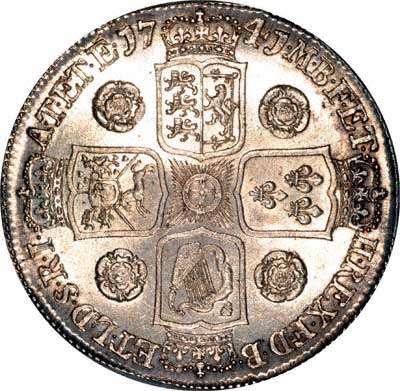 Silver had been mined in Britain since Roman times, often as a by product of lead. The Domesday Book in 1066, showed a diverse and small scale silver mining industry. The west country mines were deeper than the surface and shallow mines elsewhere, and were not exploited until 1292 and later when the Devon mines were worked under direct government control. By 1350 mining came to a halt because of the problems of deep working, and also because the population had been diminished by plague. Mining was resumed later, usually by lessees. By 1480 it had become necessary to use mechanical pumping of water from the mines.

Smelting and refining methods improved during the 13th and 14th centuries, and again in the 16th century using newer technology.

There were Devon silver mines around Bere Ferrers, Combe Martin, and the Dulverton / Brushford area on the Somerset border. Other mines in Cornwall, Somerset and Devon were primarily lead or copper mines with silver as a by product.