The Coins of Queen Victoria - The Old Head Portrait

This is our blog, if you are interested in purchasing Victoria Old Head coins, please click this link.

This is the fourth and last blog in the series of The Coins of Queen Victoria - The Portraits.

In 1893, a fourth and final portrait of Queen Victoria was introduced which replaced the designs for all British coinage. Known as the Old Head (or the Veiled or Widow Head), this portrait lasted until the Queen’s death on 22 January 1901.

The Victoria Old Head Portrait was designed by Thomas Brock, his initials T.B are in relief below the truncation. This left facing portrait of Queen Victoria shows a mature, stately bust of the grandmother of the British Empire. Until 2015, Victoria was the longest reigning monarch of Great Britain.

On this portrait, the Queen's shoulder is facing slightly to the right rather than the typical straight profile. Victoria wears a tiara which looks like the diamond and sapphire tiara designed by her husband, Prince Albert. The Queen's widow's veil is edged with lace and draped over the tiara. Her hair with a centre parting is pulled into a bun at the back of her head. As with all of Victoria's portraits, her hair is brushed to expose her ear from which she wears a long pearl drop earring. There is a slight sharpness to the nose and the mouth has lost the soft pout. The hint of a double chin and slight sagging is rather fitting for the elderly 74 year old queen. As with the Jubilee Head portrait, Victoria wears a necklace with a large pendant although the length of the necklace has been extended. Although this looks like pearls, this is probably the Golden Jubilee Coronation Necklace with the 22.48-carat Lahore Diamond. After the death of Prince Albert, the queen had donned widow's clothing which continued until her own death. This portrait shows a plain dress with a finely pleated lawn fichu edge trimmed with lace. The Star of the Order of the Thistle brooch is worn below her left shoulder.

Coins to Look Out For

Please note prices that coins achieve depend on the condition and grade of the coin. Prices can also be affected by market demand. 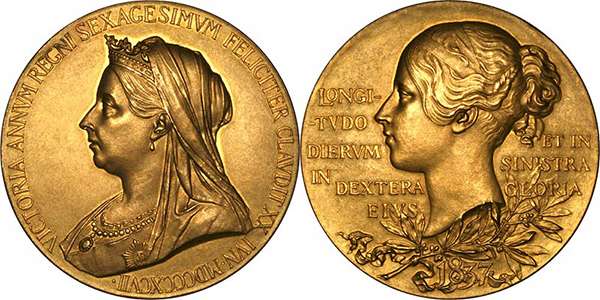 The 1897 Victoria Diamond Jubilee Medallion was released to celebrate the Queen's 60th anniversary on the throne. No other British monarch had passed this landmark and it was a great cause for rejoicing. The medallion featured the Old Head portrait on the obverse with the Young Head portrait on the reverse. The date of her accession to the throne 1837 with the inscription LONGITVDO DIERVM IN DEXTERA EIVS ET IN SINISTRA GLORIA which is a proverb from the bible 'Length of days is in her right hand; and in her left hand riches and honour.'

The medallion was struck in 22 carat gold, sterling silver and bronze.

Other blogs in this series include:

We hope you have enjoyed this blog. We would love to hear your comments, if you have any suggestions for more blogs please let us know.