The Gold Sovereigns of Queen Victoria

One excellent way to collect gold sovereigns is to ignore dates, and collect type coins. For example, there are three different portraits types and two different reverse designs of Victoria sovereigns, although there were over sixty different dates. It's not necessary to collect every one of the years from 1838 to 1901, just three or four coins would suffice to illustrate the main types.Some type collectors may wish to acquire two specimens of some types, so that they can display the obverse and reverse (head and tail) side simultaneously.

The three obverse designs featured on sovereigns across Victoria's reign are the young head (sometimes refered to as the bun head), the jubilee head and the old or widow head. There was only ever two designs featured on the reverse of the gold sovereign, the crowned shield and St George and the Dragon.

The young portrait of Victoria was used from her first coins of 1838 until 1887 for gold and silver coins, but continued in use until as late as 1895 on some bronze coins. The shield reverse on sovereigns was used from 1838 to 1887, although St. George reverse types were also produced from 1871 to 1887 on young head sovereigns, both designs being produced simultaneously. The date appears under the head on all young head shield reverse sovereigns of Victoria.

Introduced to the British coinage in 1817,  the St George & the Dragon was the work of the famous Italian engraver Benedetto Pistrucci. St. George was originally used as a reverse design on five pound pieces, two pounds, sovereigns and crowns of George III, was continued on the two pounds, sovereigns and crowns of George IV, but was replaced by a shield design from 1825 / 1826. Various shield designs continued during the reign of William IV, and the first coinage of Victoria. From 1871, St. George reappeared on the gold sovereign, and from the 1887 jubilee issues, also on crowns and half sovereigns. The date is on the reverse side on all St George reverse sovereigns of Victoria. 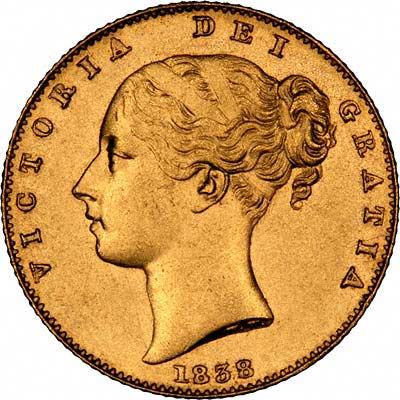 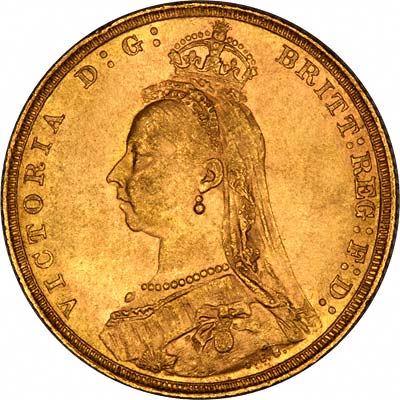 For Queen Victoria's golden jubilee year of 1887, a new design was produced for all gold and silver coins, showing Victoria wearing a small coronet. Although the jubilee head coin issues are now very popular, they were much criticised at the time. Jubilee sovereigns were struck from 1887 to 1893 inclusive. For the year 1887, three different designs of sovereign were issued, young head shield, young head St. George, and jubilee head. All jubilee sovereigns have the St. George & dragon reverse design.

Also called the veiled or widow head, this last design change was introduced in 1893 and continued through until 1901. It shows a more mature portrait of Victoria wearing a crown and a veil. All Victoria old head sovereigns use the St. George reverse design. During the year 1893, both jubilee and old head sovereigns were issued. 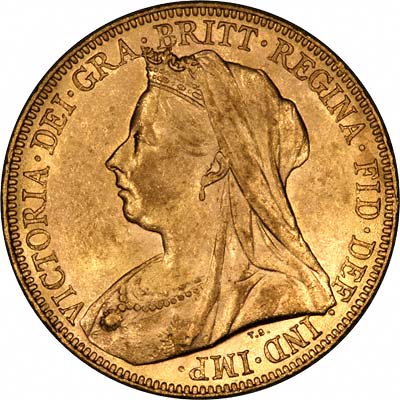 If you would like to read more about some of the most infuencial figures and pieces in numismatic history we recomend the following;

The story of the sovereign

The coins of queen Victoria - The Gothic Portrait