On January 30th 1649, Charles I was beheaded in front of the Banqueting Hall at Whitehall Palace. 7 years before, few people could have predicted this outcome. The late King's opponents had only set out to control his rule and actions, they had not set out to oust him, let alone try and execute him, and what was created in place of the monarchy was unprecedented in British history. Although previous monarchs had been deposed and/or killed, none had ever been tried, or accused treason against their own people, and they had always been succeeded by another Monarch of the Royal blood. This time however, it was not possible to simply replace the monarch with another Royal who was more acceptable. The Civil War had not been a dynastic struggle between rival members of the Royal family, and Charles I's son and successor (later Charles II) had an undisputed claim to the throne. However, Charles the younger was in exile and was implacably hostile to the Parliamentary side that had killed his father, so simply replacing the father with the son was not an acceptable option, particularly for the regicides who had signed the late King's death warrant and who stood to lose everything if Charles II was ever allowed to claim his throne.

In any case, radicals within the New Model Army, which had become a political force in its own right, had already, even before the end of the First Civil War, begun to question the very need for a monarchy, and had advocated a Republic ruled by a committee of 'godly men'. The grandees of the Parliamentary side, including Oliver Cromwell and Henry Ireton, had rejected such revolutionary ideas until their failure to negotiate a settlement with Charles I forced them to put him to death and create a republican form of government for lack of a better alternative. 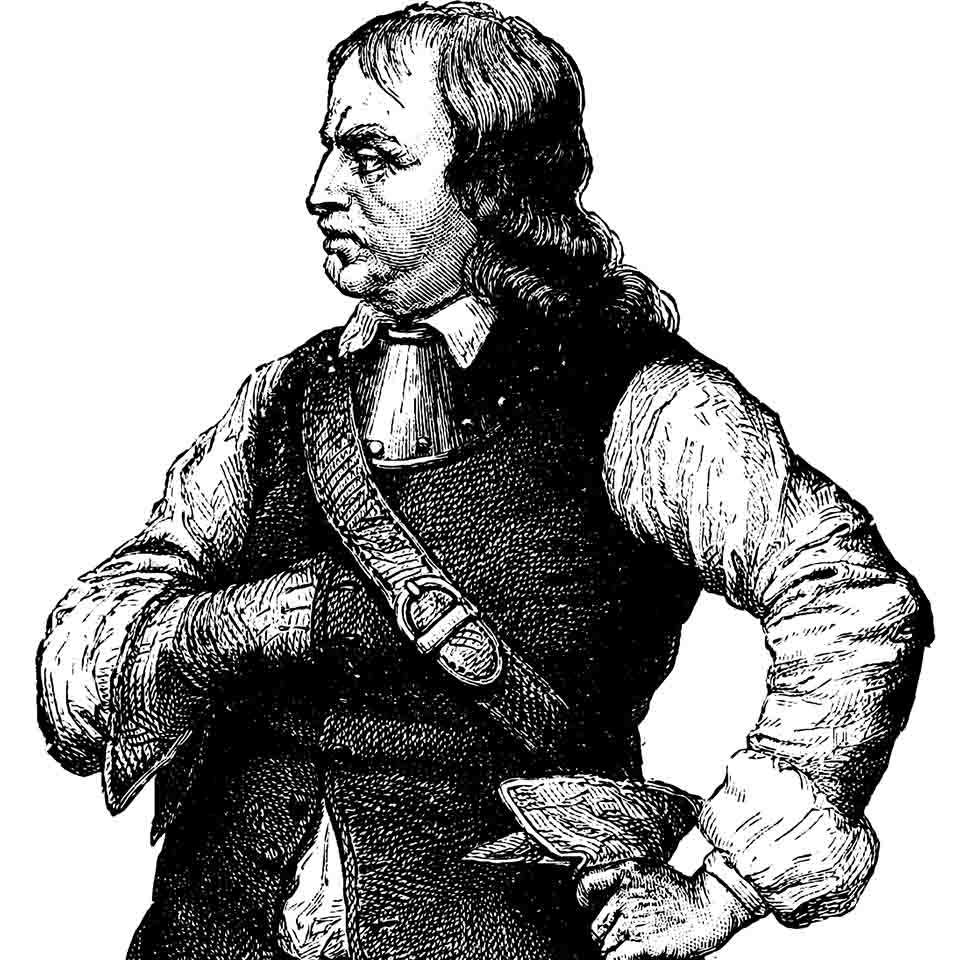 The Commonwealth of England...

Following the execution of Charles I and the abolition of the monarchy, the newly founded Commonwealth replaced the Monarchy with a Council of State, which attempted to rule in place of the Crown alongside the Rump Parliament. Over the next four years however, this form of government proved to be deficient, especially in the eyes of the Army, and so in 1653, Oliver Cromwell marched into Parliament accompanied by soldiers (much like Charles I had done a decade before) and forcibly dissolved Parliament. Cromwell was to rule England as 'Lord Protector' a king in all but name, Oliver Cromwell, lacking any real constitutional legitimacy, ruled at the barrel of a gun as a military dictator, wielding more power than Charles I had ever dreamed of, much to the consternation of many of those whom he had led or fought alongside in the cause of Parliament against a king whom they had deemed a tyrant, although not without support from others who feared that the alternative was a collapse into anarchy.

The outbreak of a rebellion in Ireland of Irish Catholic confederates against Anglo-Scottish protestant rule in Ireland, and the neccesity of raising an Army to suppress it, had been one of the trigger points in of the First English Civil War. Initially, the Irish Confederates fought English Armies loyal to both the Royalist and Parliamentarian sides, hoping to end English domination of Ireland and win independence or at least greater autonomy and toleration for the Catholic religion. As the Royalist cause in England started to weaken by 1643 however, the Irish Confederacy came to the horrifying realisation that the consequences of a Parliamentary victory would be much more adverse to their interests than a Royalist one. Parliament, dominated as it was by puritans and presbyterians with a visceral hatred for Roman catholicism, would no doubt turn its attentions on them if and when the war against Charles I had been won, and take a particular enthusiasm in taking revenge upon the Confederacy and Catholics for their rebellion and for the massacres that had been perpetrated on protestant settlers in the North. The King on the other hand, was married to a catholic and was much more likely to be persuaded to grant the religious concessions they desired. In addition, his weakening position in the English theatre meant that he would probably have been more eager to address their grievances and demands in return for their support.

As it turned out, the Royalist cause was lost in England, despite the support of most of the Irish Confederate movement. In fact, in many ways, it had worked against the King because it had landed Parliament a major propaganda victory against Charles for having allied with those whom had perpetrated massacres against protestants living in Ireland, which, it was suggested, would be repeated on English soil if Charles was ever to bring his new Irish Catholic allies over to England to fight for his cause. Following the execution of Charles I in 1649 and the invasion of Ireland by the victorious New Model Army under Oliver Cromwell that same year, the Irish Confederacy was forced to fight a battle-hardened English Army that was religiously determined to crush the Irish Confederate cause without compromise. After an unprecedentedly bloody 4 year campaign, the New Model Army, at first led by Oliver Cromwell himself but later by Henry Ireton and Edmund Ludlow, did indeed succeed in utterly crushing the Irish Confederacy, destroying the power of the native catholic aristocracy and bringing Ireland firmly under English control within Cromwell's Commonwealth Protectorate.

Cromwell had been in Ireland for less than a year before he was forced to return to Britain to lead an English Army against an invading force of Scottish Covenanters, who had previously been allied to the English Parliament but which had now, in return for the promise of imposing Presbyterianism on England, allied themselves with the Royalist cause. Cromwell first managed defeat the Royalist-Covenanter alliance at Preston in 1648, ending the Second Civil War and leading to the trial and execution of Charles I. Following the execution, the Scots declared Charles II as King, and the Covenanters once again took up arms in favour of the Royalist cause, leading to Cromwell's return from Ireland to lead an invasion into Scotland. Cromwell managed to defeat the Scottish and Royalist armies at Dunbar (1650) and at Worcester (1651) Which cemented Cromwell's control over Scotland. Once victory over the Irish Confederacy had been established in 1653, Cromwell ruled over a united Commonwealth Protectorate for the rest of his life.

Restoration of the Monarchy

Cromwell had originally taken over as Lord Protector dressed in ordinary clothes, but towards the end of his life, had adopted kingly regalia, and wielded powers even the most absolute of continental monarchs would have envied. In part, this adoption of monarchical regalia was an attempt to give his rule a gravitas that would legitimise his authority. The peoples of the British Isles as a whole were not yet ready to ready to accept even the possibility of a government without a King, and so Oliver Cromwell attempted to act like one, although he never took on the title, which many of his supporters would have considered a step too far, and have caused Cromwell to suffer a fate similar to that of Julius Caesar. Cromwell's military achievements and political acumen had given him power and kept him in it. In 1658, Oliver Cromwell, Lord Protector of England, Ireland and Scotland died. He had named his son Richard Cromwell as his successor. Unfortunately, Oliver could not transfer the merit that had given him his position onto his son and turn it into monarchical legitimacy. Richard Cromwell may have been no more incompetent than a lot of English monarchs, but in the absence of charisma, military glory or political skill, there was nothing to compel the organs of state to remain loyal to his cause, and he was ousted the following year and replaced by a new Council of State. The flaws inherent within an executive run by committee soon became apparent once again however, and General Monck led his troops down from Coldstream into London to secure the restoration of the Monarchy and order amidst infighting within the Council of State and the Barebones Parliament.

The Commonwealth republican experiment ultimately failed to take root. It did however, last long enough to implant the idea that rule without a King was not completely inconceivable, and served as an inspiration for further Republican experiments in France and the American colonies, which were ultimately successful a century and a half later. Numismatically, the Commonwealth period is notable for producing the only English coins with legends entirely in English. Most other English and British coins minted before or since have legends which are wholey or partly in latin, which many zealous protestants may have considered to have 'catholic' connotations. Nevertheless, Cromwell did eventually reintroduce coins with a latin legend, complete with a portrait of himself on the obverse as part of his attempt to stamp a quasi-royal sense of power and authority over the Commonwealth. These coins, and especially the Cromwellian portrait types tend to be quite scarce, not least because following the restoration in 1660, Charles II destroyed as many of them as he could so that he could replace them with coins bearing his own likeness in order to try and wipe out the legacy of those who had defeated and killed his father and then denied him the crown for so long. 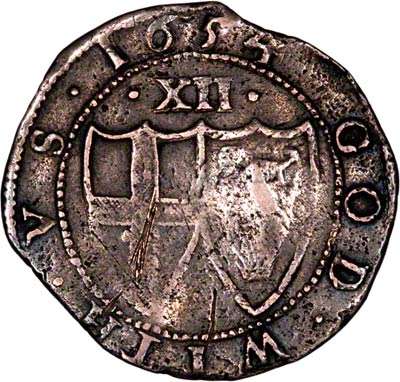