Tails - Designs on the Reverse of British Sovereigns

Perhaps Britians favourite coin, the gold sovereign has featured many designs, depictions and engravings since its inception. The reverse is the secondary side of the coin opposite from the head or obverse. It is commonly called the "tail" side. We always wonder whether people who call the obverse the front side also call the reverse the back side! We will attempt to describe and picture the reverses of all the different sovereigns. 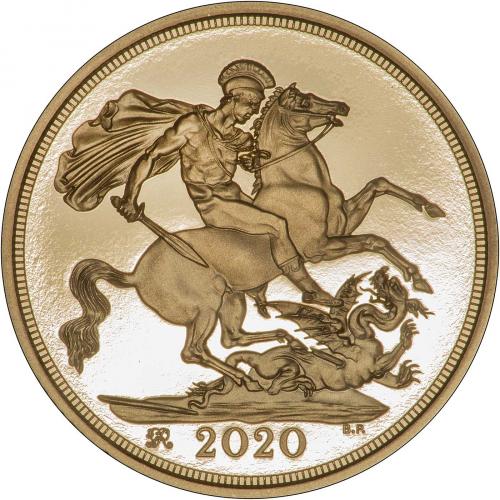 The reverse of the first gold sovereign, introduced for Henry VII, featured a shield bearing the royal arms superimposed on a large Tudor rose. Our picture shows a the reverse of a sovereign of Elizabeth I 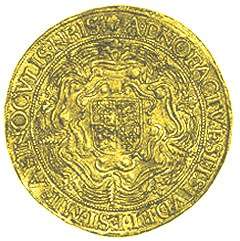 The 20 shilling gold coin issued under King Charles I was called a unite. We have cheated a little here and shown the reverse of a triple unite dated 1643. It shows an abbreviated form of the famous declaration made by Charles to uphold the protestant religion and the laws of England. 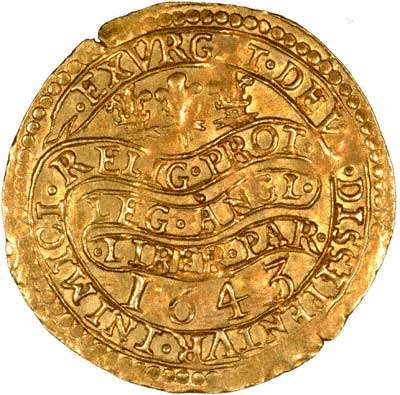 The gold broad of Oliver Cromwell featured a crowned shield. The Latin motto translates as "Peace is sought by war". 1817 saw the introduction of the modern gold sovereign during the great revision of the coinage under George III. A great Italian artist and engraver, Benedetto Pistrucci was employed by the Royal Mint as an engraver. His most famous work is the George & Dragon which was used on sovereigns and crowns.
Saint George, the patron Saint of England, is shown on horseback slaying a dragon.
On the sovereigns of George III, St. George appears within a garter bearing the motto "Honi Soit Qui Mal Y Pense", from the Order of the Garter. 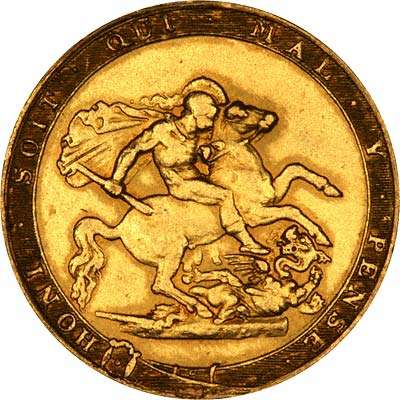 On the first type sovereigns of George IV, issued from 1821 to 1825, the garter was omitted from the Saint George & Dragon reverse, creating the definitive reverse design which has appeared on most gold sovereigns since, and still appears on today's sovereigns, with a few slight variations. 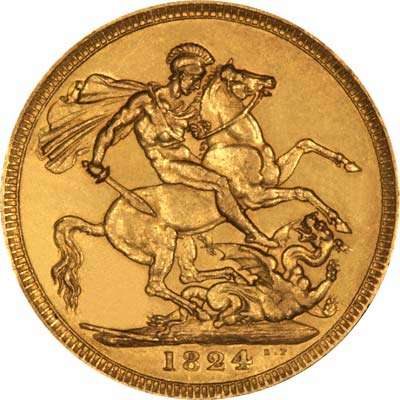 On the second type sovereigns of George IV, issued from 1825 to 1830, a crowned shield was used as the reverse design. 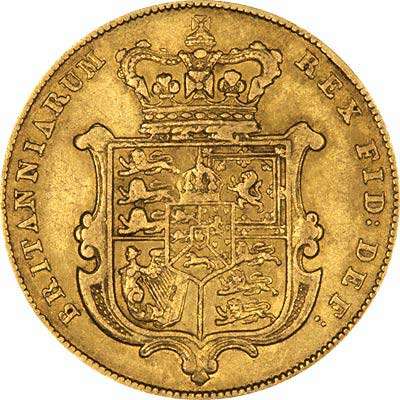 The shield reverse design was continued for William IV, from 1831 to 1837, although the size and shape of the shield was modified, and most of the lettering removed. 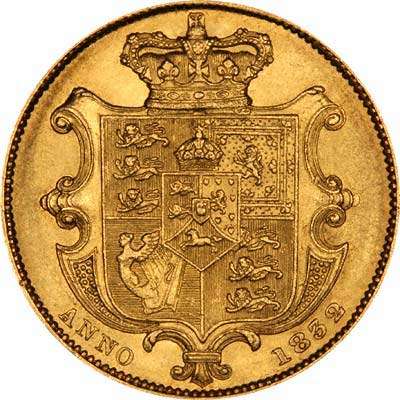 The first reverse design for Queen Victoria was a crowned shield, which was used on sovereigns from 1838 to 1887 inclusive. It was refined and modified a number of times during this period. We intend to feature all the different varieties in good time. 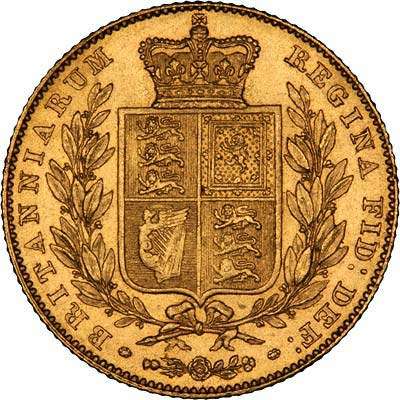 In 1871, a "type 2" version of the young head sovereign was introduced, engraved by William Wyon, with Pistrucci's famous Saint George and the Dragon reverse design.This same design is still used on gold sovereigns today. 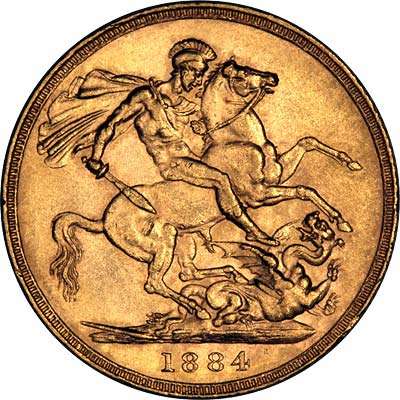 A smaller, and re-engraved version of St. George and the Dragon reverse design was adopted for George V sovereigns from 1929 to 1932. We have shown larger images of the two types on their own page George V Reverse Comparisons. 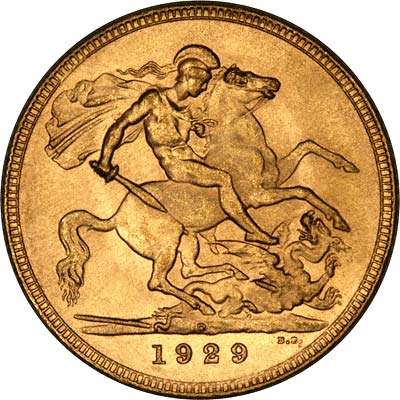 In 1989, a special design was used on the gold sovereigns, and also the other gold sovereign multiples and fractions of that year. This was to commemorate the 500th anniversary of the issue of the first gold sovereign in 1489 for Henry VII. The reverse shows a crowned shield bearing the current Royal Arms superimposed on a Tudor Rose, in a reproduction of the style used 500 years previously. As Her Majesty the Queen is also the Duke of Lancaster, it would be reasonable to claim that the rose is a red rose, the emblem of Lancashire. Our neighbours across the border in Yorkshire may wish to dispute this! First introduced in 1917, our picture shows the George and Dragon reverse design on a 2001 proof sovereign, virtually unchanged since the Garter was removed on the sovereign of 1821.The dragon has still not been slain. 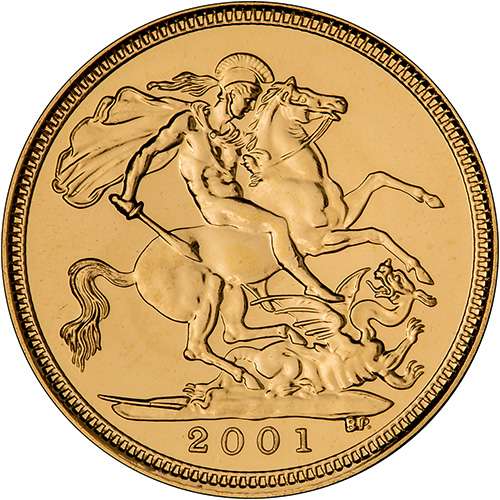 For the Golden Jubilee of Elizabeth II in 2002, a revised version of the shield design, last used in 1893 has been recalled for just one year. 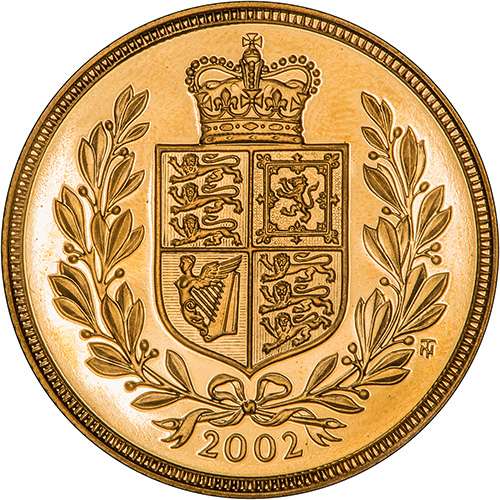 In 2005, a new version of St. George and the dragon was used just for the one year. Designed by Timothy Noad 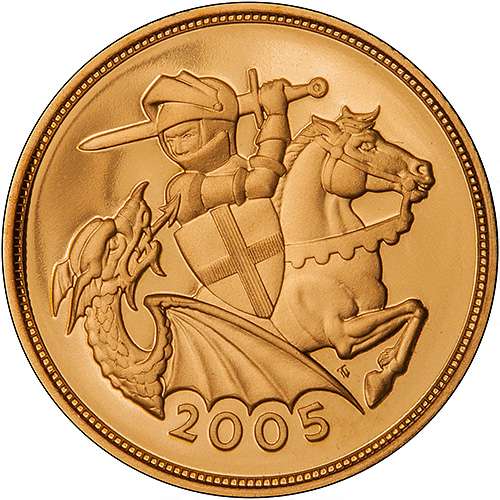 To mark the Queen's Diamond Jubilee, the reverse design changed again in 2012. It was desigined by Paul Day and appeareed on the coin only in 2012. If you would like to know more about the most prominent and influential designs of British coinage then we recommend the following: