William and Mary were first cousins, and shared Charles I and Henrietta Marie as grandparents. They were married at Parliament's insistence in order to cement an alliance between England and the House of Orange.

At first, the 15 year old Mary was horrified at the prospect of marrying her 27 year old cousin, but the marriage became a loving and successful one. They reigned as co-regnal monarchs from 1688 onwards until the death of Mary in 1694, whereupon William reigned alone for a further 8 years.

Earlier in his life, William had to struggle against Dutch Republicans for the right to rule as Stadtholder, in this he received the tacit support of Charles II, who viewed him as a potential moderating influence on the Dutch Republican faction, who were particularly hostile to English interests (or rather, to those of Charles II, who was a pensioner of the French king Louis XIV). To this end, Charles, with the encouragement of Parliament, arranged the marriage of his niece Mary to William to cement an alliance between the House of Orange and England. In spite of this, William was a patriotic Dutchman, and as Louis XIV was a devoted enemy of the protestant Netherlands, William viewed the French king as his enemy also. Because of this, William did not entirely view Charles II or his successor, James II, both of whom were friendly with and subsidised by Louis XIV, as allies.

Mary, as the eldest daughter of James II was, in the absence of a son, the King's heir presumptive. The growing discontent with James was muted by the prospect of the protestant Mary eventually succeeding him. However, in 1688, James Francis Edward Stuart, was born to James and his Queen Consort. Mary, who had now been displaced as the first in line to the throne, tried to spread rumours that this son was a changeling. This rumour did not gain much purchase, but nevertheless, the birth of a Catholic Prince of Wales was a cause for despair amongst the protestant nobility, and for William, who now faced a permanent line of Catholic monarchs who would be hostile to protestant Holland and friendly towards William's mortal enemy, the King of France.

The protestant nobility invited William and Mary to invade England, and William and Mary duly landed at Brixham in Devon with about 16,000 Dutch troops. When John Churchill and Princess Anne both defected to William and Mary, James II lost his nerve and tried to flee. He was captured, but William, not wanting to make a martyr of his uncle, allowed him to escape to France. William III and Mary II were subsequently crowned as co-regnant monarchs.

The Bill of Rights 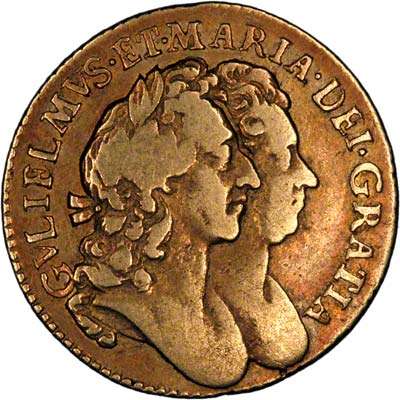 Although William and Mary had invaded England and essentially seized the throne by force of arms; Parliament was in the position to dictate the terms by which they sat upon it. Although the Whigs were William and Mary's most enthusiastic supporters, they were naturally hostile to monarchical power, and would only support them if they ruled according to how they believed a monarch should rule. The Tories, for their part, were natural supporters of the monarchy, but because they were consciously aware that the rightful king, James II had been deposed for political reasons, William and Mary could not therefore rely on their usual intrinsic loyalty to the Crown. William was particularly aware that he was not in a position to alienate either faction without incurring potentially dangerous consequences, and so he acquiesced to the Bill of Rights, which limited the powers of the monarch and affirmed the rights of their subjects and of Parliament.

The monarchy's financial dependence on Parliament was re-enforced by making all revenue due to the crown (with the exception of customs dues) subject to a Parliamentary review every few years. This financial dependence was further reinforced by William's desire to raise revenue to continue his struggle against Louis XIV, which Parliament used to wring further concessions in their favour, such as the Triennial Act of 1694, which required that the monarch should summon Parliament at least once every 3 years.

In 1694, Mary II died of smallpox without leaving any issue. William III deeply mourned her death, as did the nation (to this day, barristers wear black as a sign of mourning for the Queen's death), and the people's sympathy countered the king's unpopularity and a somewhat more dubious right to remain on the throne in the absence of his wife. William nevertheless resolved to continue the struggle against Louis XIV, and in that year, William III granted the Bank of England its charter, which allowed the government to borrow money at favourable rates, laying the foundations of Britain's naval and industrial might in the coming century. In 1702, William died as a result of complications after falling from a horse. The horse was said to have stumbled on a mole hill, which led to Jacobites in exile to form a new toast, to the 'little gentleman in the black velvet' in reference to the mole. William III was succeeded to the throne by his sister in law and cousin, Anne.

It would not be hyperbolic to say that the reign of William and Mary changed the course of history. In a century were the general trend in Europe was towards increasing monarchical despotism and the centralisation of power, as in France. William and Mary's ascension went against the grain of this continental trend and laid the foundations of modern constitutional government, where the executive arm of government, in the form of the Crown was held in check by the legislature in the form of Parliament. By reforming and expanding the Navy, as well as instituting the Bank of England, Britain's Dutch King imported the best practices of his home country, which were to be the basis of Britain's global dominance for the next two centuries.

Numismatically, William and Mary's coinage featured a unique conjoined bust design during Mary's lifetime, before reverting to a singular portrait design when William ruled alone after 1694. In 1696, a great recoinage was instituted to replace the worn and often badly clipped hammered issues which were still in circulation with modern milled issues. For this purpose, temporary branch mints were opened in Bristol, Chester, Exeter, Norwich and York, each with their own mintmarks displayed below the King's portrait, in order to assist the Royal Mint in producing the coins necessary to replace the old issues. This recoinage was an expensive enterprise, as the clipped issues no longer contained their full intrinsic worth in precious metal, and so the notorious window tax was introduced to help pay for the recoinage. Although the recoinage was completed within a few years, the notorious window tax was not repealed until 1851.