The last of the male Stuarts to sit on the throne, James II proved to be one of the most controversial monarchs in British history. A convert to catholicism in a fiercely protestant nation, his religious beliefs, and his policies would eventually lead to the downfall and exile of the Stuart Dynasty. 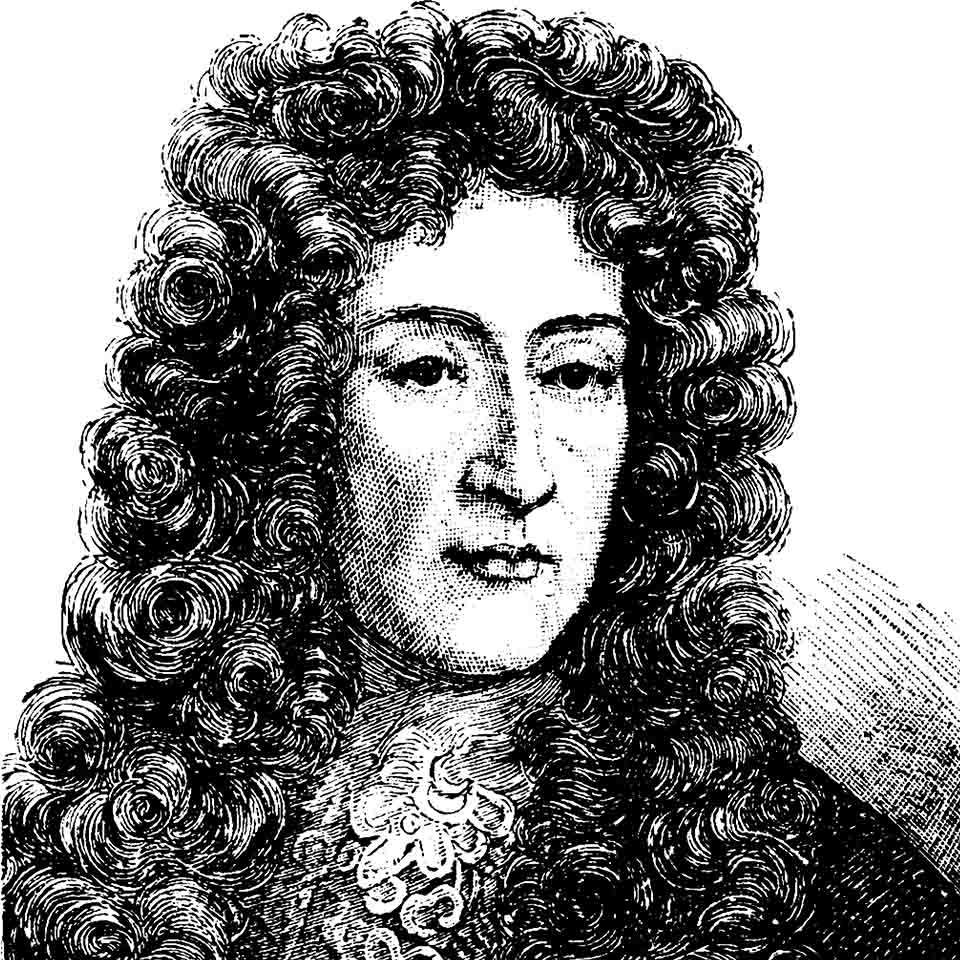 Born in 1633 to Charles I and Henrietta Marie. James was 9 years old when the Civil War broke out, and spent most of his time during the conflict in the Royalist stronghold of Oxford. In 1646, James was captured when Oxford fell to the Parliamentary Army, and James was taken to St James Palace and confined there under Parliamentary supervision. In 1648, he escaped and made his way to the Hague to join his elder brother in exile.

Whilst his elder brother Charles worked on gathering political support to regain the throne following their father's execution, James joined the French Royalist Army, which was itself fighting a Civil War against the rebel French Fronde. James fought under the legendary French commander, Turenne with some distinction until Charles' decision to break his alliance with the French Royalists, which led to James being expelled from France and into the service of the Spanish, with whom he fought in the Battle of the Dunes against his former comrades. Despite being on the losing side, and suffering a devastating loss of English Royalist men in the battle, James nevertheless spoke proudly of the performance of his fellow Englishmen in the New Model Army, who bore the brunt of the fighting against the Spanish troops under his command on the right of the line.

This battle was nevertheless a severe blow for the English Royalist cause, and the chances of the monarchy ever being restored appeared hopeless, until Oliver Cromwell died that year and the Commonwealth Government started to unravel.

In 1660, Charles II was restored to the throne at the request of Parliament. James was made Duke of York, and took an active role in military affairs as Lord High Admiral in charge of the Royal Navy. By all accounts, he acquitted himself well in this role, despite England's ultimate defeat in the Second and Third Anglo Dutch Wars which were fought during James' term of office. As Charles II's reign war on, anti-catholic feelings began to intensify, culminating in the 1673 Test Act, which required all those in public office to deny any belief in transubstantiation (a key belief of Roman Catholics). James, who had secretly converted to catholicism, refused to take the oath, thus exposing his conversion and relinquishing his post of Lord High Admiral.

King Charles II had no children by his barren wife, Queen Catherine, and it became apparent that James II would in all likelihood succeed his brother. Anti-Catholic feeling was reaching such an extent towards the 1670s, that a gullible and hysterical public was prepared to believe in the ridiculous lies of Titus Oates, a defrocked Anglican clergyman who had once been a Jesuit, and a firebreathing sermoniser against homosexuality in spite of his own conviction and dishonourable discharge from the navy on the grounds of sodomy. Oates had claimed to have uncovered a conspiracy to murder Charles II and put James on the Throne, producing a document (forged by his own hand) containing 'proof' of his allegations. Although Charles quickly arrived at the conclusion that Oates was a liar and a fantasist, the perjerur's words carried more weight with the public and with the Whigs in Parliament, who, whether they believed in the 'Popish Plot' or not sought to use it to try and exclude James from the line of succession. The Whigs were thwarted in their objective however, when Charles II dissolved Parliament before the Exclusion Bill could be passed. By the time Parliament was reconvened in 1681, the immediate crisis had passed and public opinion had finally turned against Oates when several men who had been executed on the strength of his evidence had later been found to have been innocent. The Whigs however, suffered for their associations with Oates' falsehoods and were crushed as a political force until the death of Charles II in 1685. In spite of the best efforts of his opponents, James II succeeded the throne as the first openly Catholic monarch since Mary I nearly a century and a half earlier.

Having failed to prevent James from coming to the throne, the Whigs in exile plotted to have James, Duke of Monmouth (Charles II's illegitimate son) depose him and take the throne in his place. The evidence conjured up to suggest that the late king had in fact secretly married Monmouth's mother was not very convincing, but nevertheless, Monmouth landed in Lyme Regis with a small band of soldiers, hoping to pick up more recruits on the way. Most of his recruits consisted of poorly equipped farm hands who wielded their agricultural implements as weapons, if they were not lucky enough to possess an outdated firelock musket. The defeat of this army and the execution of its leader and figurehead should have ended this farcical episode, but the brutal treatment of the rebels, suspected and real at hands of Judge Jeffrey's 'Bloody Assizes', happening in conjunction with the persecution of protestants in France by his ally, the King of France, following the revocation of the Edict of Nantes, gave many the impression that James II was a brutal tyrant who would ruthlessly impose his catholic faith upon the population by force as soon as he was in a position to do so. James, unwisely given the sensitivities of the time, tried to appoint as many Catholics as possible to positions of power, and tried to force Magdelen College, Oxford to elect a Catholic as their president, in addition to trying to push through his Edict of Toleration for Catholics (and non-conformist protestants), which alarmed those within the Church and Nobility (the monarchy's natural allies) as well as his usual opponents into believing that such an act of toleration was the thin end of a wedge designed to ram the Roman Catholic religion back into its former position as the religion of state. The unprecedentedly large standing army he was creating (consisting of 34,000 men under arms) which was being staffed with catholic officers, was also viewed as part of the prelude to a crackdown on opposition to his policies so that he could impose catholicism and absolutism on the nation by force of arms, as the King of France, Louis XIV was in the process of doing in his own kingdom across the Channel. The blunt and less than diplomatic personal manner which James had developed as the result of his service as a professional soldier and sailor, won him few friends amongst those with reservations about his ultimate intentions.

Nevertheless, the protestant hierarchy had resolved itself to weather the storm, in the knowledge that James could not reign forever and that eventually, his protestant daughter and heir presumptive Mary, wife of William of Orange would succeed him and continue the protestant line. These hopes were dashed however, when James' second wife, Mary of Modena, gave birth to a son, James Francis Edward Stuart in 1688. In despair at the prospect of a permanent line of Catholic monarchs reigning over England, several leading protestant nobles, later known as the 'Immortal Seven' signed their names to a letter which was sent to William of Orange and his wife Mary, inviting them to invade England and seize the throne with their support. William landed in the West Country with a Dutch Army. James prepared to lead his own forces against them, but lost his nerve after a series of high-profile defections, including John Churchill (ancestor of Sir Winston) and his other daughter, Princess Anne. After an abortive first attempt, James finally managed to flee to France to join his family. An attempt by James to regain his throne via an invasion of Ireland ended in defeat after the Battle of the Boyne, and James fled back into exile, where he died in 1702. In spite of two further failed uprisings in 1715 and 1745, his descendents continued to actively claim the throne until 1807. 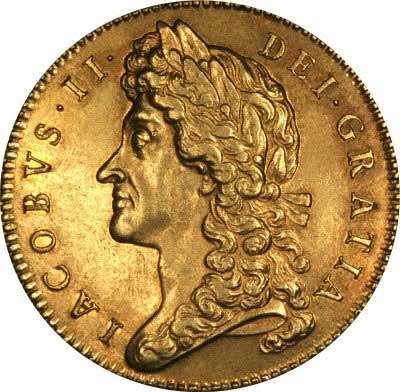 Jacobism, the movement named after the deposed king, would continue to cast a shadow of Britain until well into the 18th century, with the last battle on British soil, Culloden, fought in 1746 the name of his son, the old pretender by his own son, Charles (also known as 'Bonne Prince Charlie). Support was strongest in the Scottish Highlands, Ireland and the North of England (particularly in Lancashire) where catholicism had held out more strongly against the reformation.

Numismatically, James II had carried on striking coins in much the same manner as his elder brother had done since 1663. The most notable coins of James II were struck after he had been deposed, when during his failed invasion of Ireland, he struck base metal 'silver' denominations, known as 'gunmoney' on account of the fact that much of the metal that was used to cast these coins was derived from old cannons that had been melted down for scrap. These coins had the unique distinction of having the month as well as the year of issue stamped into them to faciliate a later redemption in good silver coins at a later date, which of course, never came to pass, leaving many unfortunate Irish holders of these coins severely out of pocket in the aftermath of James' defeat.