Of all British coinage denominations, the guinea seems to cause the greatest confusion. Of course, most non-collectors in Britain would struggle to explain any of the pre-decimal coin denominations. Only those people over about 40 years of age will even recall using them. Although the last guinea was issued in 1813, the guinea as a monetary unit continued until decimalisation in 1971. Auction houses, in particular, used to denominate all their bidding in guineas. Those whose memories stretch back so far will, of course, know that the guinea was worth twenty one shillings, written £1/1/, 21s., or 21/-, there being twenty shillings to the pound. At this stage, most Americans, and some others, wilt under the strain of attempting to understand a non-decimal currency. Now here is the surprise. A guinea was not always twenty one shillings!

The guinea came into existence in 1663 under King Charles II. When guineas were first issued, they were current for one pound or twenty shillings, which amounted to the same thing. To be able to understand why the currency values of coins could fluctuate, it is necessary to give a little thought to the history of coins and money. Before the first world war, the face value of most coins was reflected in the underlying bullion value of the precious metal they contained. Not only was this true for gold and silver coins, but often in the case of base metal coins also. In ancient times, people did not trust governments as much as they do today! Whether buying or selling, it was common practice to weigh coins to ensure they they were full weight, and therefore contained their full value of precious metal.

If the relative values of gold and silver bullion change, then the relative values of gold and silver coins also change, but it would need a separate article to explain this fully. By 1694 at the beginning of William and Mary's joint reign, the guinea was worth twenty one shillings and six pence. Because much of the silver coinage was old, worn, and badly clipped, before the end of their reign, by June 1695, the guinea was worth as much as thirty shillings. After Mary's death, during the sole reign of William III, there was a substantial re-coinage of the silver coinage, which stabilised the value of the guinea. From the reign of George III in 1760, few silver or copper coins were struck, so that the state of the currency deteriorated again, until in 1817 another great re-coinage took place, with the guinea being replaced by the lighter weight sovereign. 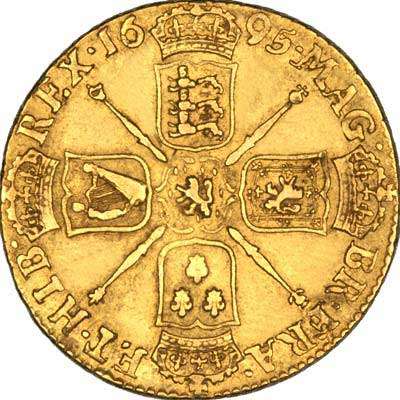 Why the Name "Guinea"?

The guinea takes it name from the African country of guinea. Much of the gold for the original issues of Charles II were brought to Britain from Africa by the Africa Company, whose badge was an elephant and howdah, often called a castle. Many English pubs are named "The Elephant and Castle". The pound sterling had been a unit of account for centuries, as had the mark. Other gold coins which originally had a currency value of twenty shillings or one pound, were the sovereign issued from 1489 for Henry VII until the unite was introduced under James I in 1604 and lasted until 1662, a pound issued for Elizabeth I from 1583 to 1603 (the sovereign at that stage being worth up to thirty shillings), the broad issued under Oliver Cromwell in 1656.

Silver pound coins were issued for Charles I, as siege or emergency money, at provincial mints of Oxford and Shrewsbury. A base metal (nickel-brass) one pound coin has been issued since 1983.

Although "milled" or machine made coins were introduced in England during the reign of Elizabeth I, hand hammered coins were still being produced at the beginning of Charles II's reign. From the introduction of the guinea, all British coins were machine made.

Probably the best known guineas were the fifth head types of George III which featured a spade shaped shield as the reverse design, and are commonly known as "spade guineas" or even "spade ace" guineas, although these were only struck during a period of thirteen years from 1787 to 1799.

As with most coins, forgeries are known to exist. Seaby's catalogue notes 1798 as a particular date to beware, mainly because of some superb modern forgeries from the Lebanon during the 1970's. In addition, there exist many brass imitations, which cannot really qualify the the title of forgeries, as there weight is considerably too light. Many brass imitations were made as publicity tokens or propaganda pieces. One very common example is the "Cumberland Jack", a brass imitation guinea issued around the time of Queen Victoria's accession in 1837. It features a young head portrait of Victoria on the obverse, and a mounted Duke of Cumberland, after the style of Pistrucci's famous Saint George and Dragon, on the reverse, with the inscription "To Hanover". This was a reference to the Duke, an unpopular character, becoming the ruler of Hanover, a title which Victoria was debarred from inheriting because she was female. 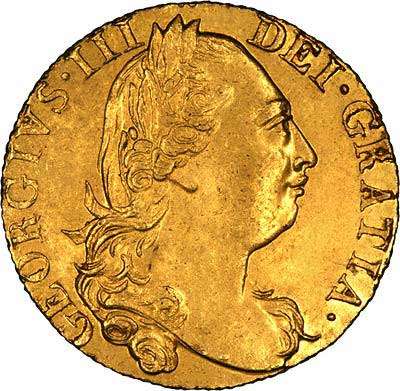 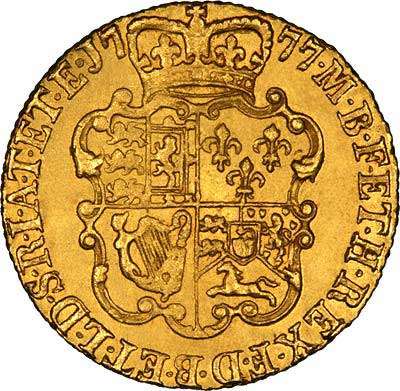 The Story of the Gold Sovereign

If you are interested in the history of the British gold sovereign, this is available on our sovereign guide page.

If you have an enquiry about any of our gold guineas we'd be happy to try to answer you, but do please ensure you look at our other information pages before asking a generalised question.