Read our blog about The 1816 Coinage Act which was introduced to stabilise Great Britain’s currency here.

History behind the Great Recoinage of 1816

In 1816, Britain was in the grip of a financial crisis!

During the French Revolutionary Wars (1792-1802) and the Napoleonic Wars (1803-1815) Britain had exchanged large cash subsidies to pay nations such as Austria, Prussia and Russia to join British forces in the fight against France. As a direct result of the military and economic warfare against France, Britain was thrown into a state of great financial instability.

The economic conflicts of the era meant that Britain experienced a severe shortage of copper and silver coins and trade was drastically disrupted.

As a result of the coin shortage, local banks and manufacturers started to produce tokens which were intended to circulate as currency alongside paper money. However, during this period traders were quite often affected by a lack of confidence in payment methods and the poor exchange rate for international transactions. As the Industrial Revolution and the might of the British Empire gathered momentum, the British government recognized that they needed a way to control and stabilise the nation’s currency.

In order to restabilise Britain’s currency, the government introduced a series of coins, including the sovereign. These coins were truly worth their weight in gold and silver and the Act defined the value of the Pound Sterling relative to gold and silver.

It is understood that the main aim of the Act was to reintroduce silver coinage and to change gold coinage from the guinea (valued at 21 shillings) to the slightly lighter sovereign (valued at 20 shillings), with the value of the shilling remaining unchanged at twelve pence. 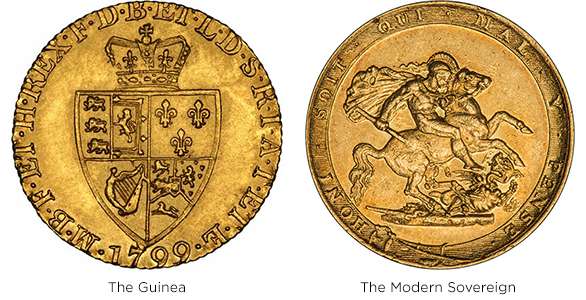 Initially the sovereign was not very popular with the public who preferred the convenience of paper money. However, the paper currency of value £1 was soon limited by law. Subsequently, the sovereign, issued with a nominal value of £1, became a popular circulating coin and was trusted, as a coin with a known quantity of gold, to be used in international trade and in foreign lands. In fact, demand for the new coinage was so huge that within the first ten years 35,588,574 sovereigns were minted for circulation.

The basis on which the weight of the ‘modern’ sovereign was calculated was that one troy pound of standard 22 carat gold was £46, 14 shillings and 6 pence. Therefore the sovereign should have weighed 7.988030269 grams - although with the technology of the time it was far more difficult to achieve such a precise weight. This standard persists to the present day, over two centuries later!

The Effect of the Act on Silver

As part of the Act the government also declared silver coins legal tender only for sums of money up to the value of £2. This was to avoid the pitfalls of bimetallism. After a long drought of silver in Britain, the mint struck a huge number of silver coins including nearly 40 million shillings (weighing 5.655g) within the first 4 years, 17 million half-crowns (weighing 14.138g) and 1.3 million silver crowns (weighing 28.276g). At this time the value of one troy pound of standard (0.925 fine) silver was fixed at 66 shillings (previously 62 shillings) or its equivalent in other denominations. This established the weight of all silver coins, their cupro-nickel successors and their decimal new pence replacements from 1816 until 1990s.

It bears mentioning that although many other denominations came and went, such as threepence, sixpence, florin and double florin, the value of one troy pound per 66 shillings stayed the same – irrespective of fineness (reduced to 50% in 1920 and to 0% in 1947).

Today sovereigns and pre-decimal silver are still sources of investment and great numismatic interest with sovereigns continuing to be one of our best selling products. 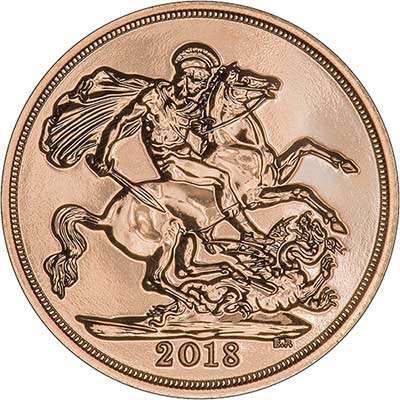