This is our blog. If you are interested in buying the 2017 One Pound Coin click this link.

The new 2017 £1 coin is the coin everyone wants to get their hands on. The new one pound will be released into circulation on 28 March 2017 and will replace the round pound which we have been used to using for the last 30 years. Your old round pound coins will need to be spent or returned to the bank by 15 October 2017, after this date they will cease to be British legal tender although you will still be able to exchange them at the bank for a limited period. The government estimates that almost £400 million £1 coins are stored in piggy-banks, change jars and behind the back of sofas up and down the UK. So, make sure you have a clear out now, you could find yourself 'in the money'!

We are stocking the Brilliant Uncirculated, Silver Proof and Gold Proof coins as well as the 2016 dated One Pound two coin set. 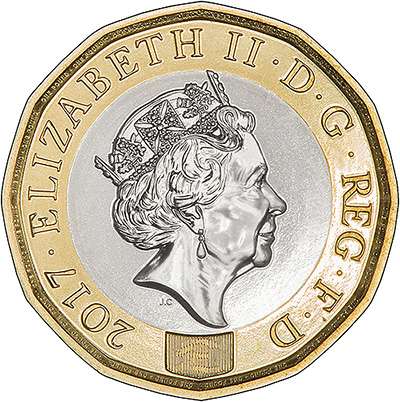 The obverse features the fifth definitive UK coin portrait of Elizabeth II by Jody Clark, his initials, JC, sit under the truncated neck. This bust sits within the 'silver' coloured inner centre.

The outer 'gold' coloured band contains the inscription 2017 · ELIZABETH II · D · G · REG · F · D and a laser-micro inscribed £ symbol on a fine lined background inside a small shield. As the coin is tilted, the £ changes to a 1. This outer band is bevelled towards the edge. Within the narrow bevelled edge, in each section the words ONE POUND·ONE POUND are repeated in tiny lettering, a total of twenty four times per coin.

The reverse features a design of a crown which contains floral symbols from the four nations of the United Kingdom. The rose for England, the leek for Wales, the thistle for Scotland and a shamrock for Northern Ireland. The flora engraving covers both the inner 'silver' centre and the 'gold' band.

This engraving was designed by David Pearce, a Walsall schoolboy, his initials DP are set below the crown's right edge.

As with the obverse, the outer band has a thin bevelled edge. Inside this bevel there is the date '2017' with a deep cut line on either side. 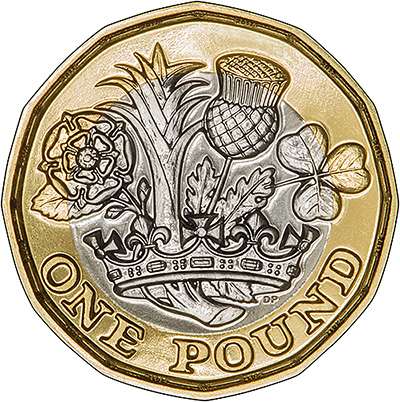 Click this link if you are looking to buy the 2017 UK Annual Coin Set. It contains the new twelve-sided one pound coin, the circulation coins and commemorative coins for 2017.