An official restrike is a genuine coin struck by the original Mint, but with a retrospective date. The word restrike is often euphemistically and dishonestly used for fakes. 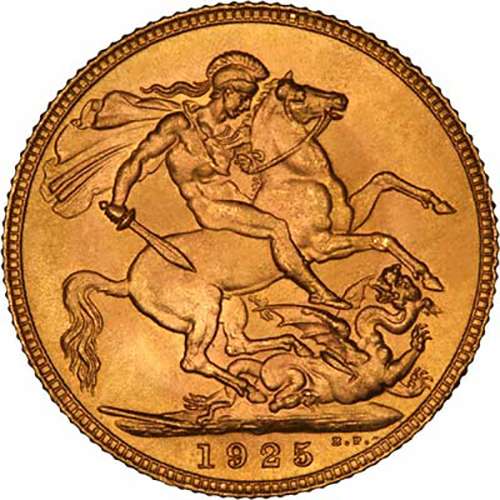 The most obvious and best documented example of restriking of gold sovereigns is that of the 1925 London Mint coins. In 1949, the Royal Mint struck and issued sovereigns, almost certainly to meet bullion market demand for sovereigns, control rising premiums, and for counter forgery reasons. It seems that they did not have time to prepare dies, and obtain the necessary permission to strike 1949 dated coins with George VI's portrait. So, they re-used existing dies, or masters. The most recent date of sovereign struck by the Royal Mint was 1925, so all the sovereigns struck in 1949 were dated 1925. This was repeated in 1950 and 1951. For sovereign collectors, it is regrettable that the 1949 to 1951 issues were not dated contemporaneously, and with George VI's portrait and titles. There had been sovereigns issued in 1937 for his coronation, but these were all proofs issued only as part of four-coin sets.

To economise on the use of dies, it is common practice at most mints to keep using the previous year's dies into the new year. This is not normally regarded as restriking. To be considered as a restrike, there would normally be a noticeable gap in production, or a formal announcement that the date would be frozen on an indefinite basis.

The Austrian Mint probably have the greatest tradition for issuing restrike coins with a frozen date. The silver thalers of Maria Theresia were a very popular trade coin in the eighteenth century, and after her death, the issue continued with the last date which had been issued normally. All Maria Theresia thalers issued since have carried the 1780 date. In this case, they have also been struck at other Austrian mints, and mints in other countries, usually with the permission of the Austrian government. There are several books about these ubiquitous coins. In most cases it is possible to determine the approximate issue date and mint. After the death of Franz Joseph, Austria continued to strike and issue a number of different denominations of gold coins dated 1915, namely the 100 coronas, 20 coronas, 4 ducats, and 1 ducat. Also the 10 coronas were restruck dated 1912, and 20 francs / 8 florins and 10 francs / 4 florins dated 1892. Mexico continued to issue its large and popular 50 pesos dated 1947. Although, it is likely that some of the other dates may have been restruck.

Where we offer these for sale, naturally our descriptions are accurate. We are currently taking photographs and adding restrikes to our website. They will appear on the links below when they are ready:

We believe all 6 replica dates were commissioned by "Premadmin or Items of Beauty", a watch dealer and eBay seller. These were struck by Pobjoy Mint.
More to follow...Buy it Now £5000 or "Make offer"! Premadmin were asking £5,000 for a complete set of all 6 different replicas, which works out at just over £833 each. It is possible to buy genuine sovereigns for a fraction of the price.

All our coins are guaranteed genuine, and we try to grade reasonably conservatively. For customers ordering by post, we want you to be delighted when you receive your coin. We thrive on repeat business and recommendation.

We are always intersted in buying gold sovereigns. Please get in touch if you have an older collectable coin or view our sell page here for bullion prices.