The Ottawa mint in Canada struck gold sovereigns for ten years between 1908 and 1919. The Ottawa mint was established to strike sovereign coins with the gold which had been discovered in the Yukon and British Columbia. It opened for business on 2 January 1908 and only issued sovereigns for ten years between 1908 and 1919.  The Canada mint's first sovereign was struck in 1908. Only 646 sovereigns were minted in 1908, making this a highly sought after year. This sovereign was struck in a satin proof finish and would have been issued for collectors, VIPs and mint officials. British sovereigns were used in circulation coinage in Canada with the same value that they were used in Britain; one pound or twenty shillings. 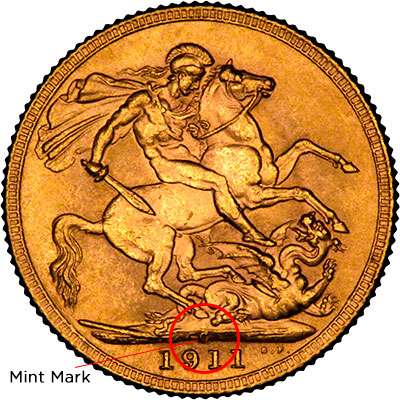 You can identify sovereigns issued by the Ottawa Mint by the letter C on the reverse of the coin in the ground above the date. These sovereigns are often referred to as Canada Mint Sovereigns. Sometimes they are written with the year date followed by the letter C - e.g. 1913 C George V Sovereign.

C Mint Mark for the Ottawa Mint in Canada

The Canadian mint also produced other coinage for use in Canada including silver and base metal coins. The first coin which was struck at this mint was a 1908 Edward VII fifty cent piece.

In 1969, the mint became known as the Royal Canadian Mint which is known for producing high-quality bullion, commemorative and circulation coins using highly sophisticated security features. The Maple is one of the most popular and easily recognised bullion coins in the world.

Naturally, the mint produced other coins in silver and base metal, the first coin struck at the Canadian Mint was a fifty cent piece. The mint still operates today and is known as The Royal Canadian Mint. It was made a Crown Corporation on April 1st 1969.

The Royal Mint opened its first overseas branch in Sydney, Australia in 1855. More branches followed as it was more cost effective to mint the coins close to where the gold was being mined. Branches were established in Perth and Melbourne, Australia, Ottawa in Canada, Bombay in India and Pretoria in South Africa.

Between 1855 and 1932, these international mints struck over 564 million British sovereigns for circulation.

The mint marks used by the various mints are as follows:-

Canadian Mint sovereigns were produced in the following years:-

Many of the coins were melted down to help pay for the British government's debt in the First World War. The rarity of Canada mint sovereigns are not necessarily in proportion to the mintage.

In relation to other mints, generally the Canada mint sovereigns are scarce, some are rare, and three of the dates, 1908 (satin proof finish), 1909 (satin specimen finish) and 1916 are extremely rare and highly collectable. Although, the 1913 Canada mint sovereign has a lower mintage that the 1916 coin, there are fewer 1916 sovereigns available.

Rather than duplicate our listing of sovereigns for sale, we include the Canadian Mint sovereigns which we have for sale on their appropriate pages, being :-

Not all of our sovereigns are available of the website, please call for details if you are looking for a particular coin.

* From 1976, the Royal Mint moved their minting facilities from London to Llantrisant in Wales.