James I (VI of Scotland)

1567 - 1625(Scotland) 1603 - 1625 (England)
Born in 1566, James became King at 13 months old when his mother, Mary Queen of Scots was ousted by an alliance of protestant nobles. With his mother exiled and imprisoned in England, and his father Lord Darnley dead (allegedly killed on the orders of Mary), James was left in the care of the zealously protestant Scottish Kirk and nobility, which was determined to see that the infant king was moulded into their idea of what a king should be. 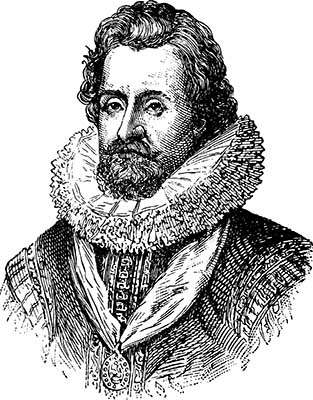 Until 1581, Scotland was governed by a succession of regents in the King's name. He was educated by the noted scholar and intellectual George Buchanan, who did his best to literally thrash protestantism and his own monarchomach* beliefs into the young king. Whilst Buchanan was successful in educating James to a high standard and imparting a love of learning and scholarship, he was, not suprisingly, rather less successful in imparting the belief that the authority of his crown should be limited.

In fact, James reacted strongly against this attempt to convince him that others had the moral right to forcibly limit his role, and in his later years he would publish his own works providing an intellectual justification for his own opinions on the 'Divine Right of Kings' to govern absolutely as God's representatives on Earth. His philosophies on kingly government, which he passed on to his children, would have fatal consequences for his son and successor Charles later on.

James as a Ruler of Scotland

In 1581 the 15 year old James managed to take power from his last official regent, the Earl of Morton by having him tried and executed for the complicity in the murder of the King's father a decade and a half earlier. However, having been lured to Ruthven Castle in 1582 by the Earls of Angus and Gowrie, he was imprisoned by them and subject to their control for ten months, until he was released the following year.

Following this, he increasingly took control over his own government, although he continued to be subject to plots against his person and authority. In 1600, the Earl of Gowrie and his younger brother Alexander Ruthven once again tried to kidnap the King, but this time James and his courtiers managed to fight off this attempt and killed them. Gowrie was subsequently subjected to a posthumous 'execution' for treason as his corpse was hanged, drawn and quartered as a warning to others who would dare try to assault the king's person and usurp his power.

In 1603, Elizabeth I of England died, and as her closest surviving male relative, James VI of Scotland became James I of England as well. He moved his court to London and styled himself as the 'King of Great Britain', although the two countries were to remain constitutionally seperate for another century. As in Scotland, James ruled according to the influence of his male favourites, somewhat to the consternation of his wife, Anne of Denmark, with whom James had a tense relationship.

Similarly to his relations with the Scottish Kirk and Nobility, James' relationship with the English Parliament was also frought with difficulties, but he managed to avoid a serious fallout by signing a peace treaty with Spain and avoiding expensive foreign wars, which would have increased his dependence on Parliament to raise taxes to pay for them in return for reforms which would have challenged his authority. He also had the shared experience with the parliamentarians of avoiding an assassination attempt against the entire English establishment by catholic conspirators who had resolved to blow up parliament with the Commons, Lords and the King himself in attendence in 1605.

In spite of this, his attempts to re-episcopise the Scottish Kirk in line with the Church of England, as well as his theories on the nature of monarchy did not endear him to many of his subjects on either side of the border, but through his pragmatic approach in not pushing his opponents too far, he managed to avoid a civil war. He died in 1625 at the age of 58.

The most obvious legacy of his reign is the union of the two crowns of England and Scotland, simply by virtue of the fact that by birthright, he eventually inherited both crowns. In 1612, he commissioned a new Bible in English, now known as the 'King James Bible', which continues to have an important influence on protestant christianity throughout the English speaking world.

He was undoubtedly an accomplished scholar and intellectual, although the ideas and ideologies that he promoted proved to be forces for destruction. His book on 'Daemonologie' published in 1597, led to an intensification on witchhunting, leading to many instances of innocent people being tortured and executed on bogus charges of witchcraft. His theories on the 'Divine Rights of Kings' as promulagated in 'The Trew Rights of Free Monarchies' and 'Basilikon Doron' led to tensions with Parliament which would, under his son, explode into a destructive Civil War between the Crown and Parliament which, in the long run led to the eventual downfall of his dynasty.

Numismatically, the reign of James I is notable for introducing a 20s gold coin known as the 'Unite' (along with its 'Unit' equivalent in Scotland), symbolising the uniting of England and Scotland under the same crown. Also under James I, Lord Harrington was given a licence to strike copper farthings, the first base metal coins to be struck in Britain since Roman times. Although these weren't wholeheartedly accepted by the public at first, they set the precedent which led to the widespread acceptence of non-precious metal coinage before the end of the century.