Born at Bolingbroke Castle in 1367 and created Earl of Derby, Henry of Bolingbroke was the grandson of Edward III by his third son John of Gaunt, Duke of Lancaster and Blanche, Duchess of Lancaster (the Dukedom of Lancaster was acquired via her father). Henry would go on to found the Lancaster dynasty, a branch of the Plantagent family that would vie with its rival branch, the House of York for the right to reign in England during the 15th Century in the conflict that would later be known as the 'War of the Roses'.

Henry of Bolingbroke was made a knight of the garter by Edward III in 1377, who died that year and was succeeded by Richard II, Henry's childhood friend. In 1480, at the age of 13, Henry married the 12 year old Mary de Bohun, who gave birth to their first child two years later when she was 14 years old (the child was a son that died soon after birth), two years later, another son, Henry of Monmouth, the future Henry V was born.

As Henry grew into adulthood, his relationship with his former friend and playmate Richard II grew more problematic. He joined the Lord's Appellant Rebellion against Richard II's favourites in 1387. Henry's father John of Gaunt was however, a staunch supporter of the King, despite his son's position. Henry himself chose to spend most of the early 1390s abroad out of the King's way however, campaigning against the pagan Lithuanians on behalf of the Teutonic Knights, before making a pilgrimage to Jerusalem in 1393.

Henry returned to England after this, but in 1397, Richard II felt secure enough to strike out against those who had taken part in the Lords Appellant rebellion, executing the principle participants, although not Henry, whom he elevated from Earl of Derby to Duke of Hereford. In 1398 however, Richard banished Henry from England to prevent a duel taking place between Henry and the Duke of Norfolk, who was also banished. In February 1399, John of Gaunt, Duke of Lancaster died. The late Duke of Lancaster held huge estates, which the paranoid Richard II did not want Henry to inherit for fear it would make him too powerful. The King had perhaps good reason to be paranoid, however, his attempt to deprive Henry of his inheritance as Duke of Lancaster proved to be a tactical error, as Henry returned to England under the pretence of claiming his rightful inheritance whilst building up support against Richard, who was away in Ireland at the time. By the time Richard II had realised what was happening, it was too late. Henry managed to gain a following that allowed him to control most of England, and Richard II was compelled to surrender to Henry. 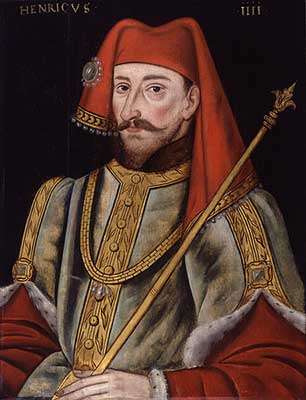 Henry took King Richard into custody as he landed in Wales from Ireland, and escorted him back to London, where he was imprisoned in the Tower. Henry asserted that Richard had abrogated his right to rule due to his tyrannical and often arbitrary rule. Richard II was thus deposed in October 1399 and Henry was crowned as Henry IV. Richard II died in February 1400, although the dispute over who should sit on the throne did not die with him. Henry had bypassed the 7 year old Edmund Mortimer, Earl of March, who had been Richard II's heir presumptive and had a genealogically superior claim to the throne. Henry IV did not do away with the young boy as he had with Richard however, and the young Earl was treated well. Despite his ejection from his proper place in the line of succession, Mortimer never asserted this claim during his lifetime, and remained loyal to the House of Lancaster for the rest of his life.

The new king did not have to wait long for an uprising opposing his rule. In 1400, Owen Glendower, one of the Welsh Marcher Lords, rose in rebellion and proclaimed independence for the principality, with himself as its Prince. Henry charged the Percys, a powerful northern baronial family, with putting down the rebellion. However, when the King disapproved of the Percy's policy of promising amnesty to those rebels who laid down their arms, they switched sides and allied themselves with Glendower in 1403. Henry IV and his son Hal (The future Henry V) then marched to Wales in person leading forces against both the Percys and the Welsh.

The Battle of Shrewsbury, fought in July of that year, saw the Percys, led by 'Harry Hotspur' Percy, defeated before they could link up with Glendower's rebel forces. However, this was not the end of the matter, and the rebellion persisted for many years afterwards with Breton, French and Scottish support, which saw Cheshire and much of the Western and Southern portions of the English coastline ravaged by the Welsh and their allies. Although the rebellion was gradually reduced as Henry IV's reign wore on, it smouldered on for the rest of his life, and they remained as a lingering threat and potential allies for any English barons who might have reason to rise against the King. Because of this, combined with his failing health after 1410, Henry IV, who wished to resurrect the 100 Years War with France and renew the English claim to the French throne, was too preoccupied at home to enact his plans for France.

In 1410, Prince Hal was recalled from Wales to assist his father in running the country. Henry IV was said to have suffered from a number of ailments, particularly leprosy, which some chroniclers viewed as divine retribution for the usurpation and murder of his predecessor. Although he periodically continued to rule as and when his health permitted, government was for the most part now in the hands of Hal and his uncles, the Beauforts for the remainder of his reign.

Henry IV died in the Jerusalum Chamber of Westminster Abbey (it had apparently been prophesied that he would die 'in Jeruselum'). Ironically however, although he died at Westminster Abbey, Henry IV was not buried at the Abbey as was usual for English monarchs at this time. Instead, he was interred at Canterbury Cathedral, as per his wish, close to the shrine of Thomas Becket, the martyred former Archbishop of Canterbury.

Henry IV set a precedent in English history by usurping the rightful king in spite of his clearly inferior genealogical status within the Royal line. As a result, the stage was set for a future series of civil wars, not only in the next century, but also in the seventeenth century, when the right of monarchs to sit on the throne purely by right of birth was called into question. Another precedent was set when Henry IV gave his coronation address in English. Under Henry IV and his successor Henry V, French would begin to lose its pre-eminence amongst the English nobility and they would once again come to view themselves as Englishmen, rather than Frenchmen ruling over an alien land.

Numismatically, the only notable aspect of Henry IV's coinage was a slight reduction in size and weight in 1412 due to the financial difficulties he faced paying for the debts incurred by the fight against Owen Glendower and other rebels, and which the English Parliament was reluctant to support with new tax levies. These were only slight however, and it is unlikely that most ordinary people noticed. Gold coins are particularly scarce during this period, as they were frequently undervalued relative to silver, leading to many of them being illegally exported to the continent and melted down for their gold content.