The future King George VI was born to The Duke of York (later George V) and his wife Mary of Teck on December 14th 1895. This day happened to be the anniversary of Prince Albert's death, much to Queen Victoria's distress, but the infant future monarch was named 'Albert' in honour of his great-grandfather, at the suggestion of the future Edward VII, and was informally known as 'Bertie' all his life

'Bertie' grew up alongside his older brother in the care of nannies, as was normally the case in British upper-class families of the day. Some of the earlier nannies responsible for their care proved to be either incompetent or abusive. The young prince developed a nervous stammer as a child, which haunted him well into adulthood.

Prince Albert of York entered the Royal Naval College at Osbourne in 1909, and eventually entered the Royal Navy as a midshipman in 1913. War broke out the following year. As Albert was not at this point directly in the line of succession to the throne, he was permitted to go on active service, and he served on board the battleship HMS Collingwood during the Battle of Jutland, for which he was mentioned in despatches for his role in commanding 'A' Turret.

Following the war, Albert married Elizabeth Bowes-Lyon (better known today as The Queen Mother) in 1923. Elizabeth Bowes-Lyon was an aristocrat who was descended from Henry VII of England, but the connection was distant enough for her to have been considered a commoner. Had Albert been directly in line to the throne, it is doubtful that the marriage would have taken place, as future monarchs were expected to marry other royals. The marriage resulted in the birth of two princesses, Elizabeth (our present Queen) and Margaret, in 1926 and 1930 respectively.

In January 1936, George V died, and his eldest son Edward succeeded him as Edward VIII. The new King desired to marry the American divorcee Wallis Simpson, but social attitudes of the time towards divorce made this a highly controversial prospect. It was firmly opposed by the government of every Commonwealth dominion (with the exception of the Irish Free State, which professed disinterest) and Edward VIII was forced to choose between Wallis Simpson or the throne. He chose the former, and abdicated the throne in favour of Albert, who in deference to his great-grandmother's wish that there should never be a King Albert, adopted the regnal name of George VI.

The new King had never been prepared for his role, and his stammer and awkwardness in public made many compare him unfavourably with his charismatic elder brother. Although the accession of George VI would have delighted his father, the rest of the Royal Family, including the new King himself, was said to have been very unhappy at his being forced into this new role for which he felt unprepared and temperamentally unsuited for.

Within three years of George VI's accession, his skills at a role he had not been prepared for would be put to the test as he was to be tasked as the symbol of British resolve to win a war which, in the early years, seemed a hopeless task. He toured the country to raise the morale of the military and civilian population, were he made speeches in spite of his tendency to stammer and hesitate when speaking. Both he and the Queen refused to evacuate London in the face of the Blitz and the King practiced with pistol and a submachine gun with the stated intention of going down fighting in the case of invasion. Buckingham Palace was bombed on more than one occasion during the war, and the King and Queen narrowly escaped death on one occasion. The Queen Mother expressed gladness at this, for it enabled the Royal Couple to 'look the East End in the face' for having suffered the same dangers as they had. The conduct of the Royals during the war greatly enhanced their popularity as they became a symbol of Britain's dogged resistance to the Nazi war machine.

In the years following the war, George VI health began to decline, as did Britain's status as a world power. In 1947, India and Pakistan was granted independence and became republics a few years later, as did Ireland in 1949. In late 1951, George had an operation to remove one of his lungs after a cancerous tumour was detected growing within it. In the following January, the King saw off his eldest daughter Elizabeth and her husband Prince Philip as they embarked upon a tour of Africa. This was to be the last time they ever saw each other, as he died in his sleep of a heart attack a week later, whereupon his daughter Elizabeth was proclaimed Queen in Kenya.

Numismatically, the legacy of George VI saw the final removal of precious metal from Britain's circulation coinage when, in 1947, all previously silver denominations (0.500) were struck with a cupro-nickel alloy. In 1937, a new brass threepence piece was introduced (although patterns had been prepared for issue in the name of Edward VIII) to replace the tiny silver issues, these continued to be issued until 1944, mainly for use in colonies using British currency such as Malta). 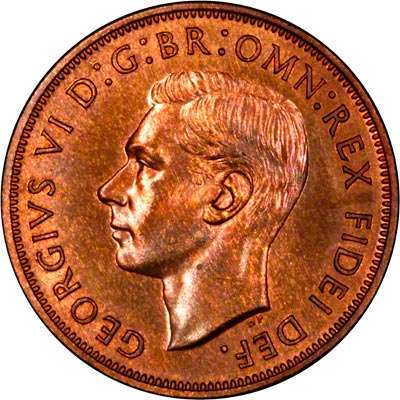 In recognition of the independence of India in 1947, the legend 'Ind Imp' (India Imperator) was removed from George VI's coins.

The proof issue of 1937 was the only gold sovereign struck in George VI's name, although it should be noted that several circulation issue sovereigns were struck in London during his reign, all dated 1925 and struck in the name of his father, George V. These can be differentiated from their original 1925L counterparts by the pronouncedly thick rim they have in comparison to most other gold sovereigns.