Henry was the most intellectually gifted English monarch to sit on the throne since Alfred the Great. Unusually for a Norman Monarch, Henry spoke fluent English, and made concerted attempts to reconcile the English people with their Norman rulers.

Henry was born in Selby, Yorkshire in either 1068 or 1069. His birthplace in Yorkshire could perhaps be explained by his father being busily engaged 'Harrying the North' at that time. As a fourth son, Henry was not expected to succeed to the throne, and as a child, he received an education befitting someone being prepared for a career in the church. As a result, Henry grew up to be fluent in Latin and English, which was fairly unusual for a Norman nobleman of the day. Because of his education, Henry acquired the surname 'Beauclerc' (fine scholar). Henry's scholarly education would prove to be a great asset later on.

Henry and his elder brothers viewed each other with rivalry and suspicion. Their father, William the Conqueror, divided his lands and assets between them in his will. The eldest, Robert, was bequeathed the Duchy of Normandy, William Rufus was given the Kingdom of England, and Henry £5,000 in silver (a second brother, Richard, had been killed in a hunting accident in 1081).

Beauclerc tried to improve his position by playing his elder brothers off against each other, but they grew wise to his political manoeuvrings, and signed a treaty stating that if either of them died without heirs, they would inherit the other's realm and thus renunite the Duchy of Normandy with the Kingdom of England.

Robert was away fighting in the First Crusade when William Rufus was killed in a hunting accident. In spite of the treaty that stated that Robert was the legal heir to the English throne, Henry seized the Royal Treasury at Westminster and had himself declared King of England. In order to appease the wavering English barons (many of whom were landowners on both sides of the channel who would rather have owed fealty to a single monarch), Henry issued the Charter of Liberties at his coronation, promising to rectify the abuses of his brother William Rufus and to rule according to the law, rather than arbitrary Royal authority. He also appeased the local English populace by marrying Edith of Scotland, a princess who was a descendent of Edmund Ironside and arguably an Anglo-Saxon claimant to the English throne. She subsequently changed her name to Matilda, in order to mollify the Norman barons who still held native Anglo-Saxon English culture in contempt.

Naturally, Robert Curthose, Duke of Normandy, was not happy at being denied what he considered to be his rightful inheritance. He invaded England the following year in 1101, but Henry had already solidified his popularity as King with the people and nobility, and the lack of support for Robert's invasion forced him to come to terms with Henry. It was agreed that Robert would drop his claim to the English throne in return for an annual stipend of 3,000 marks and to name each other as heirs to the other's realm.

However, continued distrust between the two brothers broke into open warfare again in 1105, and Henry invaded Normandy, the following year, Henry defeated Robert at the Battle of Tinchebray, where Robert was captured and held in captivity for the rest of his life. 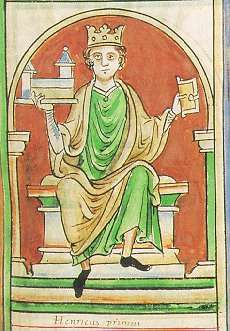 Early in Henry's reign, a conflict between the Crown and the Church opened up when Anselm, Archbishop of Canterbury refused to pay homage to Henry for his temporal lands, or accept his investiture as Archbishop from the King, in line with new papal doctrine which stated that the clergy owed no homage or right to hold their clerical office to secular authorities. The controversy dragged on until 1107, when a compromised was reached with the Pope whereby clergy would do homage for their lands to the King, but that the right to invest bishops was reserved solely for the Church.

Henry endeavoured to improve the efficiency of Royal governance by introducing the tally stick system, a form of record keeping, which allowed transactions to take place without the risky transportation of coin and bullion. He gained a reputation for enforcing the law fairly, if rather brutally by modern standards. When his son in law, Eustace de Pacy, blinded the son of Ralph Harnec, who had exchanged his son for Eustace's own daughters as hostages, Henry consented to Ralph blinding and mutilating the two girls, who were Henry's own illegitimate granddaughters. (For this, his daughter tried to assassinate him with a crossbow when the two later met).

In 1120, Henry I's sole surviving legitimate son, William, was drowned at sea. His only surviving legitimate child was Matilda. As the years went by, it became clear that Henry would not be produce another son. Henry wanted Matilda to succeed him, but many barons where reluctant to agree to this, because it was felt that the role of monarch was unsuitable for a woman. Henry nevertheless made the barons swear to support Matilda's claim. Henry died in 1135, and Stephen of Blois, Henry's favourite nephew, seized the throne in Matilda's absence. The long years of anarchy and civil war that followed would make contemporaries long for the days of Henry's firm but peaceful rule.

The coinage of Henry I is often found badly damaged, due to a crisis of confidence in the currency resulting from widespread corruption amongst licenced moneyers. The public took to testing coins to ensure they were of good quality weight and alloy. The problem became so bad that coins were issued already mutilated to encourage their acceptance by the public.
An exasperated Henry finally resolved the problem by calling all the monyers of England to a conference at Winchester in 1124 to discuss the matter. Most of those who were not savvy enough to see the writing on the wall and flee the country instead ended up having their right hand and one of their testicles brutally and forcibly amputated. A harsh, if poetic punishment for those responsible for a badly mutilated currency.