The Royal Mint have extended their 200th Anniversary Sovereign Collection with the introduction on not one, but three new coins; the Strike on the Day BU Sovereign, First Modern Piedfort Sovereign and the BU Five-Piece Sovereign.

All of the coins feature the special 200th Anniversary reverse design, struck using remastered tools from the original Benedetto Pistrucci St George and the Dragon design. 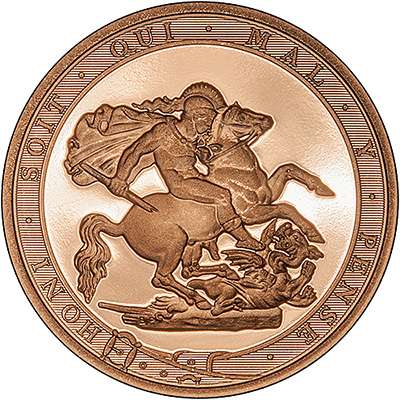 The first modern sovereign was struck in July, 1817. The coin featured Benedetto Pistrucci's St George and the Dragon design, variations of which still appear on the coins today.

To celebrate the 200th anniversary of the coin, The Royal Mint have issued a series of sovereign coins featuring the original design complete with the garter border. You can find out more about the design or the meaning of Honi Soit Qui Mal Y Pense by clicking on the links to our blogs.

2017 Strike on the Day Sovereign

On the 1st July, 2017, The Royal Mint will strike 1,817 sovereigns - a date chosen to mark the 200th anniversary since the proclamation that revived the modern sovereign.

These coins will be issued in Brilliant Uncirculated condition and feature a plain edge, as opposed to the milled edge as found on the 2017 proof design.

Whilst we normally don't think Strike on the Day coins are worth their value, we are quite impressed by this coin. Until the BU coin is released, the only way to own the 200th anniversary design on a full sovereign is to purchase the proof coin, which, due to high demand, has soared in price.

The coin is the same diameter as a sovereign - 22mm, however it is twice the thickness and twice the weight. The coin is struck in a proof finish and has a limited edition presentation of just 3,500 coins.

The final coin in the new collection is a five-piece sovereign, also known as a £5 (five pounds), crown, or quintuple sovereign. This coin is struck in Brilliant Uncirculated condition and comes in a wooden presentation box.

The coin has a mintage of just 1,000 and will only be issued as individual coins (it will not be part of any sets).

If you would like to own one of the 200th Anniversary of the Modern Sovereign coins, please make sure that you act quickly or you may miss out.