It is unusual for us to see fake Elizabeth II sovereigns, so it was interesting to examine this specimen closely when it came into our possession in October 2009. 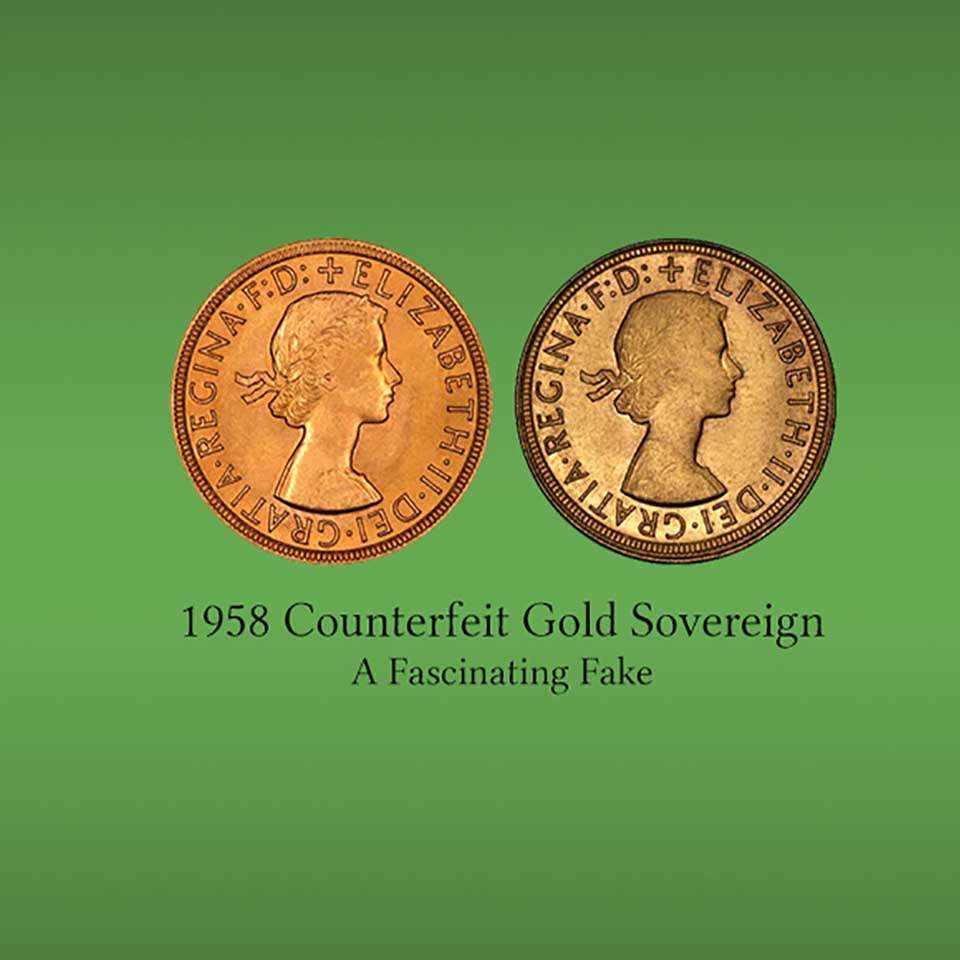 What to Look For

Ignore the difference in colour of the sovereign as this is more a factor of the photographic process.

The obverse has no notable features of difference except for the slightly polished appearance in the field. The biggest clue here is the uneven raised edge which shows that the coin was struck slightly off centre. The edge is noticeably thicker at the bottom than at the top.

We believe this is theoretically possible on a genuine example, but if so, is very rare, and we cannot remember seeing a genuine sovereign with such a degree of asymmetry. From a technical production perspective, we believe the retaining collar was defective or imperfectly positioned. 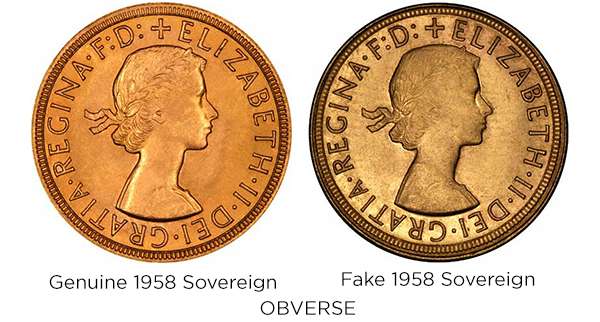 The reverse of this coin is a much more instant giveaway. As the obverse, it at first appears to be too polished and slightly prooflike. This first impression is quickly dissipated on closer examination, as the field (the flat background parts) have a slightly imperfect surface with a raised pimply orange peel appearance.

The raised part of the design appears weakly struck, and there are notable flat spots on St. George's leg, right breast, helmet, etc. Weak striking like this is a common feature on many of the Commonwealth minted sovereigns of George V, but with more sharpness at the borders with the field. The B.P. initials look slightly crude, but the easiest fault to see is the raised rim, as with the obverse. This time it is the top which is much thicker than the bottom. 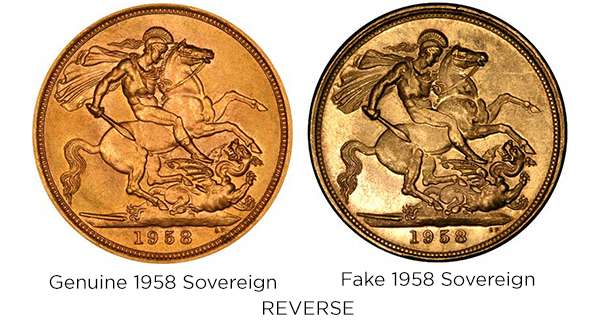 Out for the Count - Edge Serrations

A feature which is not apparent from our photographs is the edge milling. On our fake, it is noticeably crude, whereas a genuine sovereign has a much more even appearance. We also decided to count the edge serrations and discovered a small but important difference.

In our blog, Introducing the 1957 Elizabeth II Sovereign, we state that the 1957 sovereign has 168 serrations instead of 108 serrations found on other Elizabeth sovereigns. To date, we have not checked every single date of Elizabeth sovereign, but we did originally compare with 1958. Our fake has 110 serrations. At this point, we re-checked another randomly chosen 1958 genuine sovereign and confirmed that it did have the 108 we had stated. It is possible that not all Elizabeth II sovereigns have the same number of serrations, and there may even be differences within a single date year.

So there we have it. For any coin collectors who suffer from insomnia, try counting the serrations on all your sovereigns. It may also be a great way to pass a few harmless hours on cold dark winter nights (but not too dark!).

We should mention that it is not easy. For those who would like to try it, we recommend using a fine marker pen. Start near the top, and make another mark every 10 or 20 serrations. This way when, not if you lose count, you can re-check every section, then count the number of sections.

We got our trainee numismatist and history graduate to do the counting on our two samples, and it nearly drove him to distraction. We also double checked by getting one of our two photographers to count the serrations. This is much easier, as it is possible to view the coin using the full height of your computer monitor. Twenty inches makes it easier to see than under one inch and it is also possible to place virtual marks every 10 or 20 serrations more easily than on the actual coin itself.

Although we end up scrapping most fake gold coins we buy, in the past few years, we have made a point of trying to photograph every fake we encounter. Counterfeits are not only an interesting study in their own right (ask Ken Peters) but also an important area of study for any self-respecting dealer. We do maintain a small, but growing black museum, our photographic record of fakes is naturally larger.

We also try to help and educate our customers, and anybody else interested in spotting fake sovereigns, by publishing some of our fakes photos online. We would publish a more extensive catalogue of them if we had enough spare time.

Some of the most convincing counterfeit coins were produced in Lebanon in the 1970's. There was a famous criminal trial in the UK in 1976, at which we gave evidence for the prosecution. It transpired that a surprising number of counterfeits of rare numismatic specimens had been absorbed into the international numismatic trade. These included 1839 Una and the Lion gold five pounds, 1739 two guineas, 1887 and 1893 gold five pounds, 1887 gold two pounds.

From our understanding at the time, a surprisingly large number of some of the rarer pieces appeared to be present in the stocks or catalogues of a number of the world's leading coin dealers and auction houses. We have seen very little published about this aspect of the Lebanese fakes, and guess that most of the dealers and auctioneers have chosen to hide their embarrassment by keeping as quiet as possible about being duped.

On the day we originally wrote this page, we also referred to Volume 2, Number 1 edition of "Bulletin on Counterfeits" published in March 1977 by the IBSCC, to remind ourselves of some of the tell-tell signs on the relatively common gold five pounds.

Although not directly related, on page 20, there was coincidentally a report on 1958 counterfeit sovereigns which probably originated in Argentina. A feature, apparently a die crack, on the obverse of those fakes is not present on the coin we feature on this page, although the mis-struck, off centre, raised edge, a "dirty" (looking) surface, are all shared characteristics.

The weight of our fake is 8.0402 grams, which is above maximum weight whereas the reported examples were below the minimum weight.

We are not afraid to learn from our mistakes, and we had already bought this coin before we positively identified it as a fake. As the author of this page Lawrence Chard, one of our staff asked me to check a small quantity of incoming gold sovereigns which we were about to buy, and I usually check almost every single sovereign we source from the secondary market. There were about 40 sovereigns laid out in a tray, and I took the usual quick look at each, for which I normally use a x2 eyeglass. I did pick up the 1958 sovereign twice as it had grabbed my attention by looking shinier and more polished looking than normal. Proofs were not issued for 1958, but in numismatics almost anything is possible, and I tend to zoom in an anything different for whatever reason. The other common explanation for a shiny sovereign is that somebody has polished it, or that it has become polished by use in jewellery. Neither of these applied to the present coin.

Some days I sort through over 1,000 incoming sovereigns, and at 3.6 seconds each, this would take one hour. Some days I feel as though I have spent the whole working day sorting sovereigns, but the "incoming" check needs to be quite fast and reasonably accurate. In this case, I specified that I need the sovereigns back once we had bought them, to re-check, as I was aware the initial check had been a very quick scan. From memory, I think I had just walked in the door.

On my second check through the batch, I received a wake-up alarm call when I homed in on the 1958. It is very unusual for us to see fake Elizabeth II sovereigns, although naturally, we are aware they exist, so I can understand why I missed it the first time, despite looking twice. I am still mentally kicking myself for not getting it the first time!

You may be interested in reading through our Sovereign Guide or our Gold Guide.