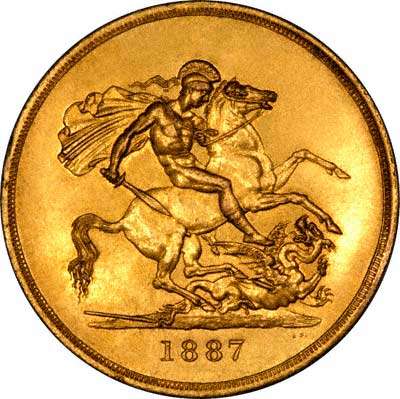 The frequency of each date of fake reflects the availability of the genuine article, with the Victoria Jubilee issue being the commonest.

It is unlikely that many of the counterfeit gold five pounds in existence were made to pass off as genuine in circulation, as they do not appear to have been commonly in everyday circulation, although lower grade specimens do turn up. It is likely that such a high value coin would have been examined with more care than usual, rather as high value banknotes nowadays are often treated with more suspicion than are the commoner, lower denominations. On the other hand, because many people would not have been as familiar with five pounds, there is an increased chance that they may have not been able to distinguish a fake.

In general, we believe most of the fake five pounds were made to take advantage of a high premium of intrinsic gold content, to sell to collectors, or for use in jewellery.

The 12 pieces shown in our photograph represented only a part of our "stock" at the time. We use the word stock with some apprehension. It is not our usual practice to sell fake coins, although they do hold important numismatic interest in their own right. We do try to maintain a "black museum" collection of interesting fake coins for their educational and training value, however we do also scrap a large number of fake gold coins which we come across. At the time of our photograph, the intrinsic gold content of each coin was about £1,000; so that the scrap gold value of these items was approaching £12,000.

Our photos were taken in April 2010. When we created this page in August 2010, we had just left 15 interesting gold five pounds at the Royal Mint for their appraisal and comments, and were about to scrap a small further quantity of more obvious fakes. Because of the high intrinsic value, we do not intend to retain many of these coins for our black museum.

We try to photograph most of the fake coins which pass through our hands, even when we do not buy them. This means we can maintain a virtual black museum collection without too great a capital investment. We intend to publish more fakes on this and our other websites whenever we have some spare time. This will include individual pages for each different date and design, and indeed will included multiple pages where appropriate.

In our pair of photographs, we have flipped each coin, but kept each in its own place, and therefore in the same order in both photographs. 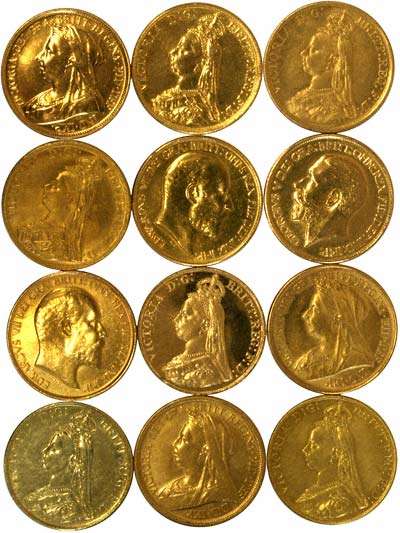 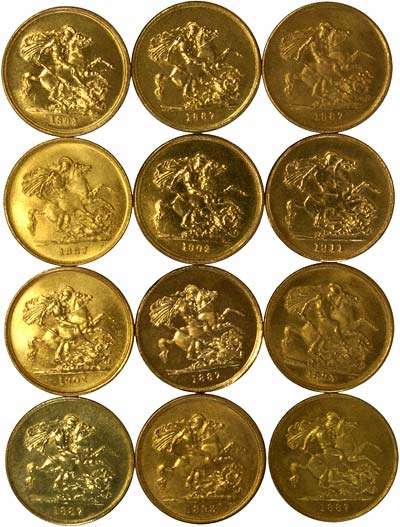 You might be intersted in reading more articles on our Sovereign Guide or our gold guide.

We have written about fake sovereigns in general and produced an article on a rare counterfeit 1958 sovereign.