This is our blog. If you are interested in buying the 2017 Sapphire Jubilee coins click this link. 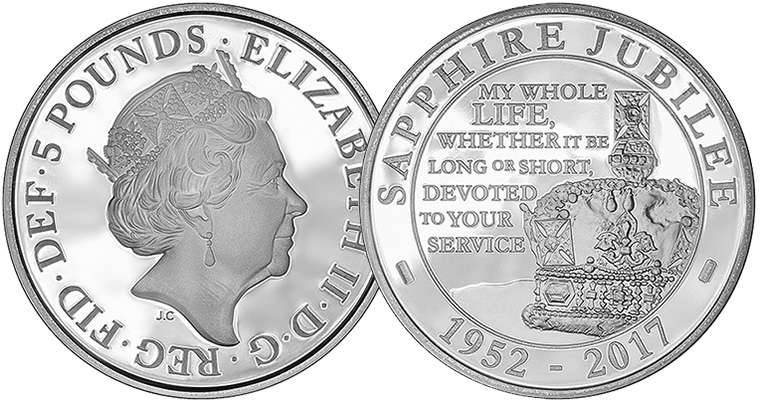 Queen Elizabeth II will celebrate her Sapphire Jubilee on 6 February 2017 as she makes history to become the first British monarch to have reigned for 65 years. A Sapphire Jubilee Crown will be released to commemorate this momentous achievement and to honour the devotion and commitment she shown to her subjects, the United Kingdom and The Commonwealth.

The fifth definitive UK coin portrait of Elizabeth II by Jody Clark features on the obverse of the Sapphire anniversary crown. His initials, JC, are below the truncated neck with the inscription ELIZABETH II·D·G·REG·FID·DEF·5·POUNDS· 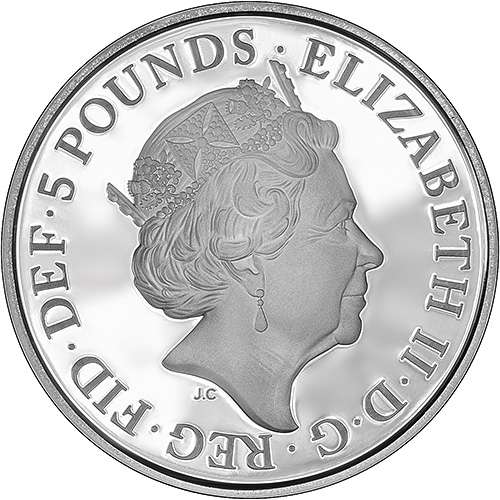 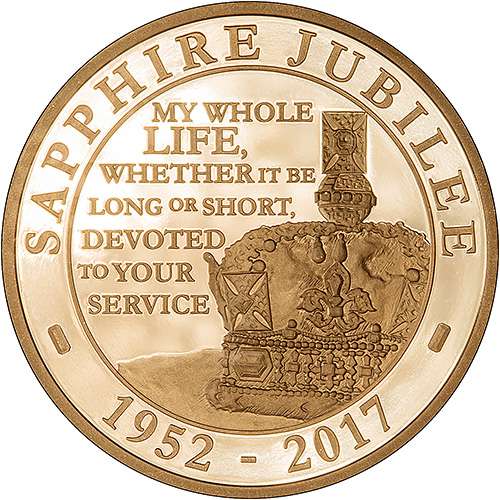 Designed by engraver, Glyn Davies, the reverse bears an engraving of the Imperial State Crown that Elizabeth II wore after she had been crowned Queen and which she wears during the annual State Opening of Parliament. The crown has been turned to highlight the 104 carat blue Stuart Sapphire which is set at the back of the crown. The quote 'My whole life, whether it be long or short, devoted to your service' formed part of the speech which was read by the Queen on her 21st birthday. The reverse bears the inscription - SAPPHIRE JUBILEE - 1952-2017.

This Sapphire Jubilee crown will be available in a number of finishes including Brilliant Uncirculated in folder, Silver Proof, 5oz Silver Proof and Gold Proof.

A 65th anniversary is referred to as a Sapphire Anniversary or a Blue Sapphire Anniversary. Elizabeth II acceded to the throne on the death of her father, King George VI on the 6 February 1952. The Queen overtook Queen Victoria's reign to become Britain's Longest Reigning Monarch on 10 September 2015. 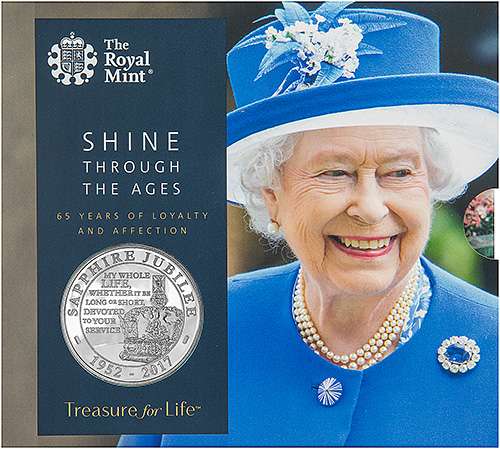 The term 'jubilee' is often used to celebrate a significant period of reign by a monarch. The word originates from the Hebrew yōḇēl and is mentioned in the bible when a ram's horn was used for proclamations and rejoicing.

The 6th February is called Accession Day. Whilst the Queen usually spends the day privately at Sandringham House in Norfolk, this historic event will be marked in London by a 41 gun salute at noon in Green Park and a 62 gun salute at the Tower of London at 1pm.

Did you know that whilst blue is the most popular colour for sapphires, they are also available in other colours; pink, yellow, orange, green, brown and purple?

Colour rather than clarity is the most important factor when valuing a sapphire, it should not be too light or too dark and should range between a deep blue to a violet blue without jeopardising the brightness. The most sought after sapphires come from Kashmir, Burma and Ceylon.

2017 is also the centenary of the origin of the House of Windsor. To find out more about the crown and other coins which will mark special anniversaries and evens in 2017 click here.