You have found our blog because you are interested in the 2017 sovereign. We sell the 2017 uncirculated gold sovereign coin.

The 2017 Proof Sovereign Collection features the the same St George and the Dragon design that appeared of the first modern sovereign which was issued in 1817. Benedetto Pistrucci designed this superb engraving of St George slaying the dragon. It is set within a wide garter which contains the inscription HONI SOIT QUI MAL Y PENSE. Both of these elements represent the Order of the Garter which is a historic Order known for its acts of chivalry and honour. Its patron saint is St George. The 2017 Proof Collection has been exceptionally popular. Visit our website for availability.

The sovereign was introduced in 1817 as the original pound coin. Nowadays, this British gold coin is popular with coin collectors and investors. The uncirculated gold bullion sovereign is one of Britain's favourite investment coins. The 2017 Elizabeth II sovereign features a privy mark on the reverse; a quartered shield with the numerals 200 above, this is set to the left of the date on the reverse.

We expect the 2017 sovereign to be highly sought after popular as it is the 200th anniversary of the modern sovereign, first issued in 1817.

The 500th Anniversary of the Sovereign? 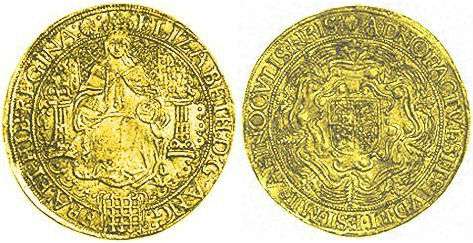 The very first gold sovereign was issued in 1489 under King Henry VII. This was the first time a coin denomination was issued with a value of one pound sterling. This new coin weighed 240 grains which equals 0.5 troy ounces or 15.55 grams – more than double the gold content of a sovereign today.

The leading German engraver Alexander of Bruchsal was commissioned to design this important new coin and it has been described as "the best piece ever produced from the English mint".

The obverse featured the King seated facing on a Gothic throne, holding an orb and a sceptre, a very majestic image. As the monarch is the sovereign head of state - this new coin featuring the monarch was named the sovereign. The legend on the obverse reads "HENRICUS DI GRACIA REX ANGLIE ET FRANC DNS IBAR".

The reverse type is a shield bearing the royal arms, on a large double Tudor rose. The legend reads ""IHESUS AUTEM TRANSIENS PER MEDIUM ILLORUM IBAT" - "But Jesus passing through their midst went His way". 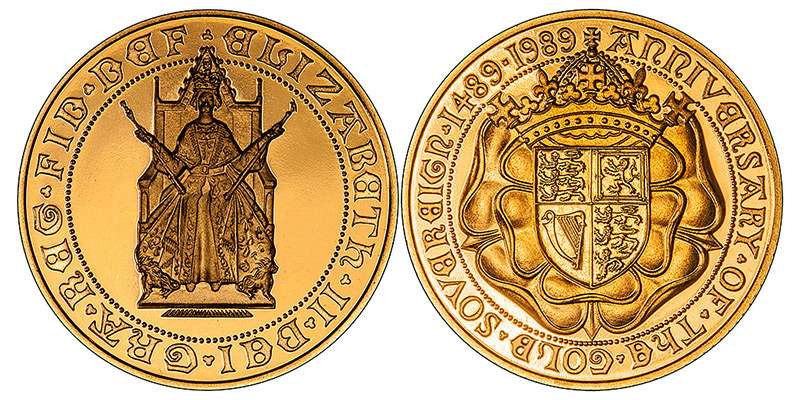 Designed by the sculptor Bernard Sindall, the 1989 sovereign commemorated 500 years since the very first sovereign with a design similar to the 1489 coin.

The obverse design featured Queen Elizabeth II seated facing on a throne, although the throne is significantly smaller and less ornate than the 1489, the design is extremely similar. Modern production techniques result in the legend being much easier to read "ELIZABETH. II. DEI. GRA. REG. FID. DEF".

The reverse is a stunning representation of the Tudor Rose with the inscription "ANNIVERSARY. OF. THE. GOLD. SOVEREIGN. 1489-1989".

In 1816, The Royal Mint moved premises from The Tower of London to nearby Tower Hill and installed new steam powered coining presses – resulting in the new and improved modern sovereign!

St George and the Dragon first appeared on the English coinage in the reign of King Henry VIII but 1817 was the first time it was used on the sovereign.

The obverse shows King George III facing right wearing a 'crown' of laurel leaves, hence it is described as a laureate head. The inscription "GEORGIUS III D: G: BRITANNIAR: REX F: D:" is around the monarch.

The reverse features the legendary St George and the Dragon, the garter inscription reads "HONI SOIT QUI MAL Y PENSE", French for "shame be to him who thinks evil of it".

Designed by Benedetto Pistrucci this classic design remains on most of our gold sovereigns today (excluding 1989, 2002, 2005 and 2012) and is probably one of the world's most widely recognised coins. 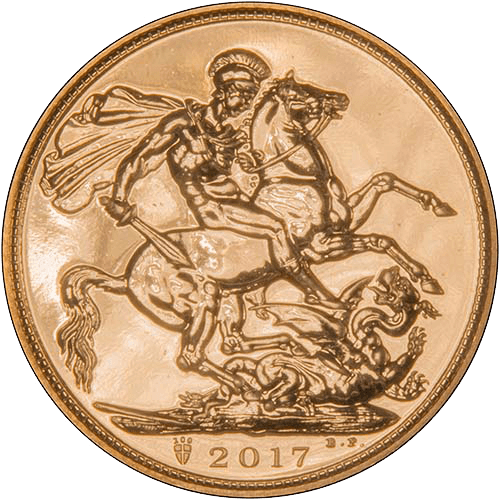 We don't have a crystal ball but... based on the 1989 design, we would be highly surprised if the 2017 gold sovereign coin didn't represent the 1817 sovereign it is commemorating!

Our guess is that Benedetto Pistrucci's St George and the Dragon will still take pride of place – possibly with the return of the legend "HONI SOIT QUI MAL Y PENSE" - after all, this French quote is the motto of the Most Noble Order of the Garter, of which St George is the Patron Saint.

It will be interesting to see whether the date is shown on the obverse or the reverse of the 2017 sovereign, as in 1817 the date was featured under King George III's portrait, whereas all Queen Elizabeth II sovereigns show the date on the reverse.

In recent years we have seen proof sovereigns feature different designs to the uncirculated versions. The 2016 Gold Proof Sovereign for example, features the 90th birthday portrait of Queen Elizabeth II, whilst the 2016 Uncirculated Gold Sovereign features the fifth coinage portrait instead. In 2012 however, both the uncirculated and proof coins featured a new interpretation of St. George and the Dragon, issued to honour the Queen's Diamond Jubilee. We wonder whether a special design will be used on both the 2017 uncirculated and proof coins?

We really hope that they honour Benedetto Pistrucci's design rather than create a modern design, as his interpretation of St. George and the Dragon is undoubtedly one of the best known and best loved of all numismatic designs.