When gold Britannias were produced in 1987, the design on the reverse of the coin was of a standing figure of Britannia. The first new design was introduced in 1997, then new designs have followed in alternate years since 2001.

The original design of gold bullion Britannia featured a standing figure of Britannia, similar to that on florins (two shillings) of Edward VII by De Saulles. It stayed in continuous use for ten years 1987 to 1996, until a new design was used in 1997 for the tenth anniversary of its issue. 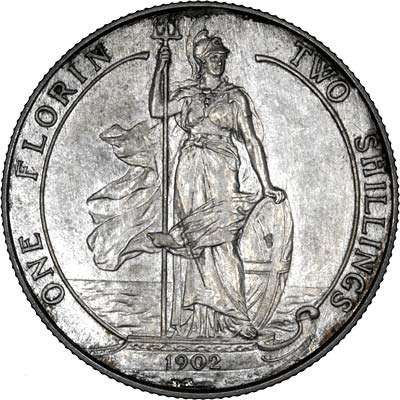 The 1997 issue of gold Britannias was marked by a change to a figure of Britannia standing driving a two horse chariot in the manner of Boudicca (Boadicea). Although we liked this design, it was originally issued in a proof version only, and then mainly as part of 4 coin proof sets. Possibly because of this restricted supply, we feel that it was not universally popular. The Royal Mint seem to market high profit coins rather than competitively priced ones, and when ordinary uncirculated "bullion" versions of this design were eventually issued in late 2003, it was only as part of a 4 coin "type" collection, at what we believe was an exorbitant price at the time, especially bearing in mind that any dedicated collectors of gold bullion Britannias had already invested in the other three coins in the set. It took us a long time to get any useful information out of the Royal Mint about availability of supplies of the individual 1997 coins. We suspect they wished to protect their own monopoly supply position for as long as possible, and they seem to be quite sensitive to any criticism on our part about their marketing policies. Eventually we did manage to obtain a small supply of individual one ounce coins in late 2004 or early 2005. We could probably buy direct from the Mint, but their minimum order is for 500 pieces, and multiples thereof, and we believe they would ask an extra premium if we wished to specify a particular date and design. For a one ounce "bullion" coins, this partially defeats the object. 500 coins equate to £150,000 worth of investment, at intrinsic value alone, before any minting premium. This problem persists for any single date or design we would like to handle.

For the 2001 issue, Britannia is shown standing facing left, and with her back partially to the viewer, with a trident, and long shield, and a lion by her side. This recalls the "Una and the Lion" reverse of the 1839 gold proof five pounds, although with a completely different artistic treatment.

The 2003 issue features another new design, a helmeted head of Britannia, with tessellated waves superimposed, reminding us of a jig-saw. For once, she appears without her trident, presumably because this design did not allow space for it, incidentally we get a number of American customers who describe it as a pitchfork!

Again, we like this design, although there are always a number of conservative collectors who seem to resist any change. The proofs of this year were issued as "reverse proofs", with the raised surfaces polished and the field matt. Again this is not popular with a number of collectors, but we feel it is brave of the Mint to use this technique occasionally, and we must admit that we too prefer the "standard" configuration of most proof issues using a matt design and polished fields. Although we say "standard", it has not always been so, many proofs have been, and still are issued with an all-polished design, which is definitely not as popular, but is probably cheaper to produce.

This design, which has been familiar on British coins since 1672, reflects the first personification of Britannia on Roman coins of Claudius. Again it has been given a fresh artistic look, and we like the design.
This design is not yet available is uncirculated "bullion" version as yet, and it may be some time before it is. We have still not seen many of the other dates of gold Britannias, including 2000, 2002, or 2004. We have no information about when this may change. We do not foresee ourselves investing upwards of £150,000 per date, and do not foresee the Royal Mint making any effort towards making them readily available for the simple reason that there is not much profit margin in doing so.

Continuing Mix of Old and New

From 2001 onwards, it seems that the Royal Mint have settled into a routine of issuing a new single year Britannia design in alternate (odd) years, with the original, now classic, standing Britannia design in even-dated years. This appears to keep most collectors happy, as the original standing Britannia seems to be popular with many collectors, and the new single year designs are popular with others. All the designs seen so far appear to retain an element of connection with the past, and this is probably as it should be.

The easiest, but most expensive way to collect gold Britannias is to by them as complete 4-coin annual proof sets, consisting of one coin of each size or weight. Because they are proofs, they are issued at much higher premiums (percentage or amount over their intrinsic gold content) than purely bullion coins, but the proofs do look superb. They can also be something of a bargain for the collector who waits for more favourable prices on the secondary market, but mot so great an investment for those who prefer to buy them as soon as they are issued, especially if buying from the Royal Mint instead of more competitive sources such as ourselves.
It can be quite difficult to obtain different dates and designs of uncirculated gold "bullion" Britannias, as the Mint are not keen to help dealers or distributors to market them efficiently, Our advice to collectors is to buy them as and when they are available.

When referring to gold Britannias, we tend to mean the one ounce variety, but there are a total of four different sizes or weights. These are described on our Britannias Information page.

In 1997, on the tenth anniversary of the gold Britannia, the Royal Mint introduced a silver "bullion" Britannia. Confusingly the designs of the silver version appear rather uncoordinated. In their first year there were only proofs issued, and these had the Chariot design. Perhaps the Mint decided that an uncirculated "bullion" version would also be a moneyspinner, as it started to market these the following year. In 1998, proofs were issued with the classic standing Britannia design, while the "bullion" version featured the Chariot design. This reinforces our belief that the lack of an ordinary version in 1997 was intended to force collectors to buy the higher margin proofs. After this strange start, silver "bullion" version have been available every year, while proof sets are issued in the one-off design years.