Between 2014 and 2018, five £2 coins will be released to commemorate the 100th Anniversary of the First World War.

The 2017 Aviation £2 coin is the fourth in a five coin series which pays homage to the men and women who fought in the First World War. The five two pound coins take us on a journey from the outbreak of WWI to the armistice. The coins have been designed in collaboration with the Imperial War Museums and are eagerly sought after by coin collectors and military history buffs. 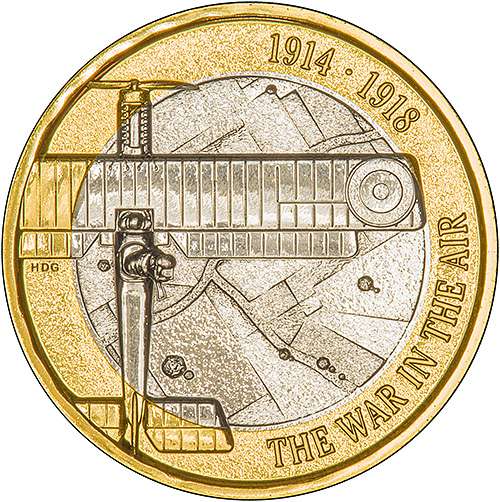 The 2017 The Royal Air Force, Aviation two pound coin honours those magnificent men in their flying machines who changed the way that wars were fought. Planes were used in battles for the first time in WWI as Britain raced to achieve domination in the skies of Europe. Initially the Royal Flying Corps was primarily used for reconnaissance and surveillance; helping to locate the enemy and identify weak points in enemy lines. These biplanes enabled Britain and her Allies to better protect their troops and improve strategies and tactics to attack and halt the advance of German troops. By the end of the war, planes were equipped with machine guns, small bombs and hand grenades which were thrown at enemy aircraft.

The British public, adults and children alike, followed the progress of ace fighter pilots who became heroes to the nation in the clash between the RAF and Germany’s Red Baron and their fleet of zeppelins.  However, the glamour of the life as a fighter pilot came at a great price, by 1917, the average life expectancy of the pilot was less than 70 hours flying time.

The Royal Air Force was officially formed on 1 April 1918 to defend the skies over Great Britain. This is the world's oldest independent air force, today the RAF provide air defence to the United Kingdom and her Allies.

The reverse features an engraving of a biplane with a pilot and an airman taking photographs of the ground below. The airman's scarf is caught in the wind. This was created by Dan Flashman of Tangerine Design who have also been responsible for the design of the 2014 Commonwealth Games fifty pence. The obverse bears the fifth coin portrait of Elizabeth II by Jody Clark.

We will be stocking the Brilliant Uncirculated, Silver Proof and Gold Proof coins. The 2017 Aviation coin also appears in the 2017 UK Annual Coin Set which contains this coin and twelve other 2017 coins.

The 2016 £2 coin honours the companionship and community spirit that was experienced by the Pals Battalions. Lord Kitchener’s campaign drew an amazing response from men up and down the country who wanted to fight for Britain. Families, friends and workmates enlisted together in a show of patriotism never seen before. ‘Pals Batallions’ were formed so that they could stay together and ultimately fight side by side. Whilst this brought the men closer, this also decimated families and tore communities apart when the battalion suffered in battles. Accrington in Lancashire, was one of the worst affected towns; in the Battle of the Somme, almost everyone in Accrington lost a relative or a friend in the battle, leaving a whole town to grieve at their loss. The impact was felt throughout the United Kingdom, families and streets were left bereft as the boyish spirit of civic pride and camaraderie was obliterated.

The 2016 Army Pals two pound coin displays a reverse engraving of three Pals side by side. Designed by Tim Sharp of Uniform Creative Consultancy, the engraving is based on the work of Christopher R W Nevinson, the official World War I war artist appointed by the Department of Information. The obverse bears the fifth definitive UK coin portrait of Elizabeth II by Jody Clark.

Edge Inscription - FOR KING AND COUNTRY 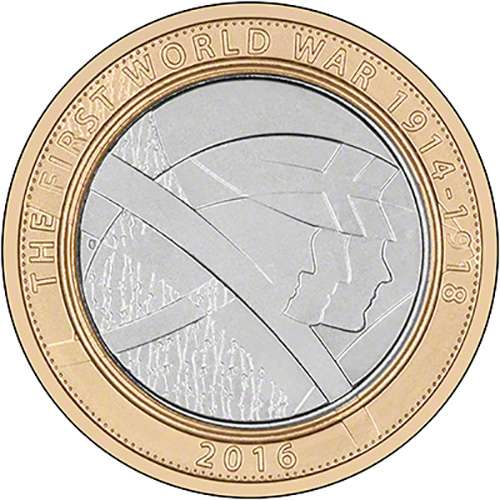 By the start of the First World War, Great Britain had the largest and most powerful navy in the world. The Royal Navy was a force of strength, protecting the United Kingdom and the British Empire and blockading enemy ports. The iconic British battleship dominated the seas. The most important naval battle in WWI was the Battle of Jutland in the North Sea in 1916. Whilst Germany lost 11 ships and over 2,000 men, Britain lost 14 ships and over 6,000 men - but they were ready to go into battle again the next day and were never seriously challenged in the North Sea again.

Edge Inscription - THE SURE SHIELD OF BRITAIN 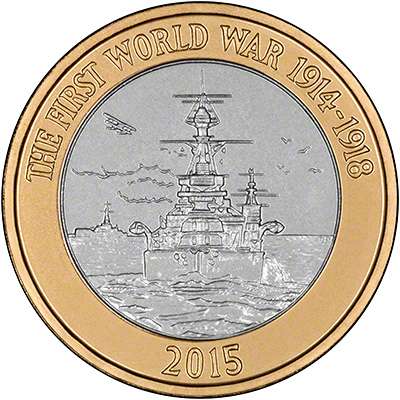 The 2014 £2 coin was the first of the five coins to be issued to mark the centenary of World War One. This coin bears the iconic image of Lord Kitchener from the campaign poster Your Country Needs You. The appearance of Lord Kitchener, Britain's most popular soldier, on a recruitment poster, became the driving force to galvanise more than 1,000,000 men to enlist to fight for King and country.

Men - and boys - of all ages and walks of life, signed up in droves to join the army and fight for their country. Boys lied about their age and it is reported that boys as young as 13 years of age were sent to war. Initially volunteers were asked to sign up, but by 1816, losses were so high that conscription was brought in. Men between the ages of 18 to 51 were expected to fight. Although some professions were exempted from serving, if you didn’t sign up it was seen as highly unpatriotic and white feathers would be handed or posted to men regardless of whether they had good reason or not to fight in the war.

The reverse of the 2014 coin bears an engraving of Lord Kitchener with the words 'YOUR COUNTRY NEEDS YOU' by John Bergdahl. The obverse features the fourth portrait of the Queen by Ian Rank-Broadley.

Edge Inscription - THE LIGHTS ARE GOING OFF ALL OVER EUROPE 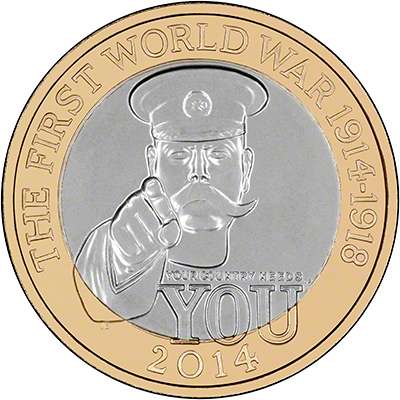