The Britannia - A Symbol of Great Britain

The Britannia coin was introduced in 1987 as the United Kingdom's answer to the Krugerrand. In this blog, we celebrate more than 30 years of this beautiful British investment coin.

In 1987, the Royal Mint released the Britannia to meet the grow column-placeholdering demand for bullion. The Britannia coin would rival the South African Krugerrand and United States Eagle bullion coins. The aim was to have a British investment coin which would be sold at a low premium over the intrinsic metal value. The Britannia was launched in 1987 in two finishes, uncirculated and proof, in four weights; one ounce, half ounce, quarter ounce and a tenth ounce. This gold coin was struck in 22 carat gold, 0.9167 fineness.

As with most fractional sizes, the one ounce coin is the most cost effective way to buy gold as the premiums on the smaller weights are considerably higher. The Britannia coin collection was seen as an alternative to the British gold sovereign and an easy way to purchase convenient small quantities of bullion.

The 1987 Britannia coin was well received by both investors and collectors all over the world.

Britannia made her first appearance on Roman coins in 119 AD, almost 2,000 years ago. Seen as the female personaification of Britan she became associated as a protector of the British Isles and in 1652, she featured on British coinage for the first time on the Charles II farthing.

The standing Britannia design by sculptor, Philip Nathan, was based on an engraving by George William De Saulles that first featured on the British Trade Dollars in the late nineteenth century. Her presence with her trident and shield on these coins epitomised the power and might of the British Empire.

Philip Nathan's Standing Britannia engraving is instantly recognisable and is still a popular design more than thirty years after its initial launch.

Whilst we feel that some of the earlier Britannia proof finishes are not always the highest quality*, the early issues of the uncirculated coins rarely fail to delight. We think that it is not unreasonable to claim that the Britannia is the world's most beautiful bullion coin.

* Some of the early proof issues have tiny marks on the field (background surface) of the coin. There is also the appearance of red or black spots on some proof coins. This is a natural occurence which we do not feel detracts from the value of the coin. 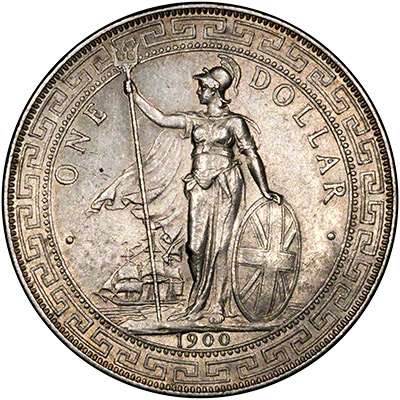 The success of the gold Britannia coin was followed ten years later, in 1997 with the release of the silver Britannia. These coins were struck in 0.958 silver, which became known as Britannia silver instead of the usual 0.925 sterling silver. The 1997 Britannia silver coins were only issued in a proof finish.

The earlier versions of the bullion Britannia coins are stylishly designed and are struck to a high quality finish for uncirculated coins; they are highly sought after and are very collectible.

Here are a selection of designs which have featured on the Britannia coins, both uncirculated bullion coins and the proof collector coins. The 1997 issue of Britannias was marked by a change to a figure of Britannia standing whilst driving a two horse chariot in the manner of Boudicca (Boadicea) by Philip Nathan. This engraving was re-used on the 1999 and the 2009 silver and gold coins. 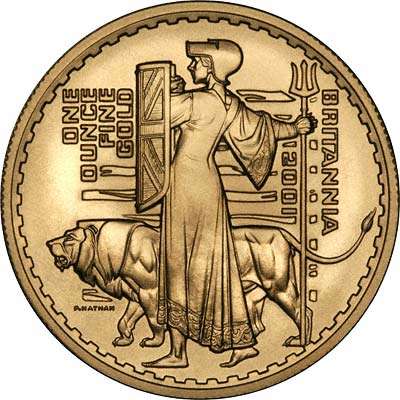 In the style of Queen Victoria's Una & The Lion, the 2001 Britannia coins show Britannia standing facing left with her back to the viewer holding her trident and shield with a lion at her side by Philip Nathan. 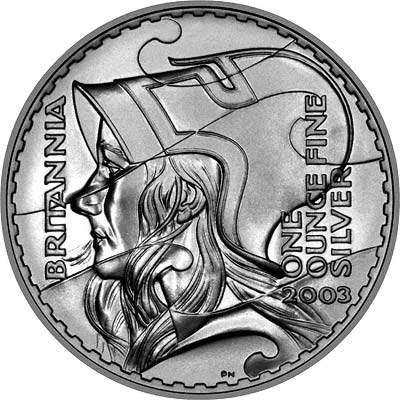 In 2003, a new modernised engraving shows a close up helmeted head of Britannia with superimposed tessellated waves by Philip Nathan. 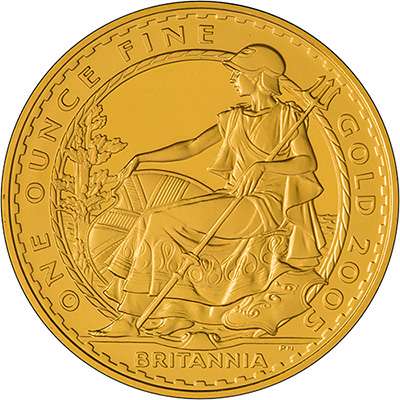 Philip Nathan designed the 2005 left facing seated Britannia wearing a helmet and a gown which has an ornately embroidered hem. The engraving features a large olive branch to the left of the design. 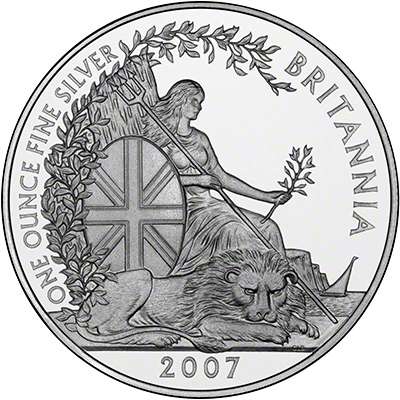 In 2007, this seated Britannia engraving by Christopher Le Brun shows Britannia facing right holding an olive branch in her left hand and her trident in her right whilst resting against a tree.The watchful lion lies at her feet. A wreath encompasses half the design. 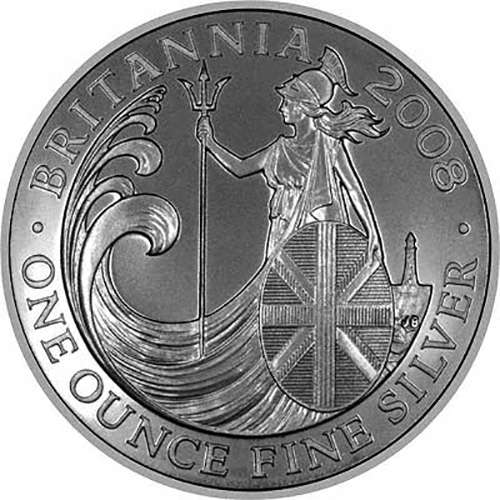 The 2008 Britannia was designed by engraver John Bergdahl. The left facing Britannia stands holding the trident in her right hand with the large shield held in front of her. The hem of her dress has been transformed into waves. 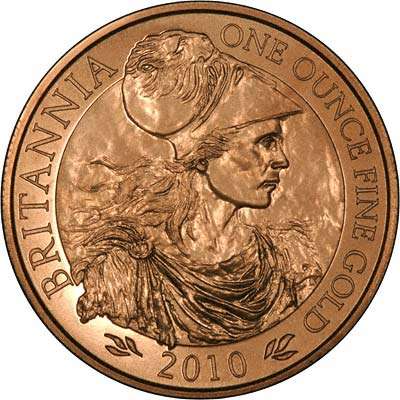 The 2010 Profile Britannia engraving by Suzie Zamit is reminiscent of the head of Marianne as Ceres on the early twentieth French 20 Franc gold coins. Facing right, Britannia looks rather more gaunt than on previous reverses. 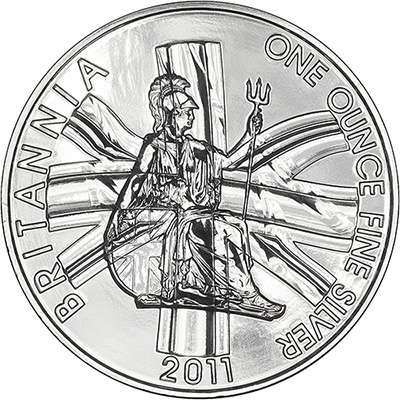 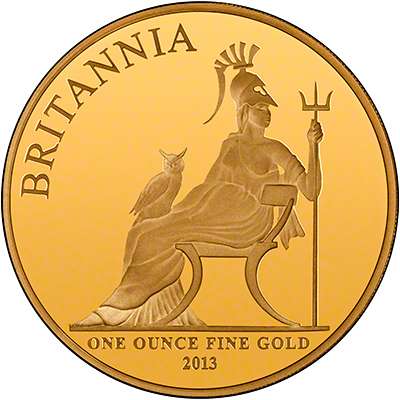 Britannia and the Owl

Only available in proof finishes, the 2013 Britannia engraving by Robert Hunt features a seated Britannia looking to the right. The stylish rendition has an ancient Greek feel which is further endorsed by the addition of the owl. The owl symbolises wisdom, status and wealth. The 2013 Britannia gold proof set contains 5 coins with the inclusion of a twentieth of an ounce £1 coin for the first time. Jody Clark's engraving for the 2014 proof Britannia range is a rather more glamourous design than any of the Britannia designs so far. This left facing Britannia is portrayed in a highly stylised pose with the trident in her left hand, the lion laid down at her feet against a backdrop of the globe. The uncirculated bullion coin features the classic standing Britannia. Antony Dufort's engraving for the 2015 Britannia proof coins display a left facing bust of Britannia wearing a plumed helmet holding the trident against her shoulder and the shield aloft. In the background stands a lighthouse in the distance and a sailing ship. Describing it as the Lighthouse Britannia might be a touch too much artistic licence, let us know if you have another suggestion. 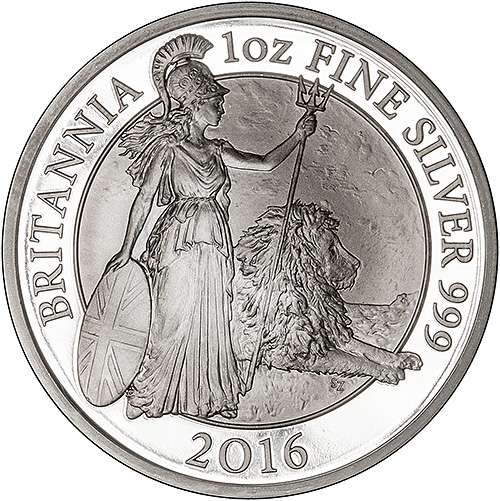 Suzie Zamit's 2016 Britannia engraving for the proof series features a right facing standing Britannia holding the trident in her left hand and resting the shield against her right side. The lion is lying at her far side. There is a considerable amount of detail in this design with an ornate helmet and many pleats and drapes in her gown. 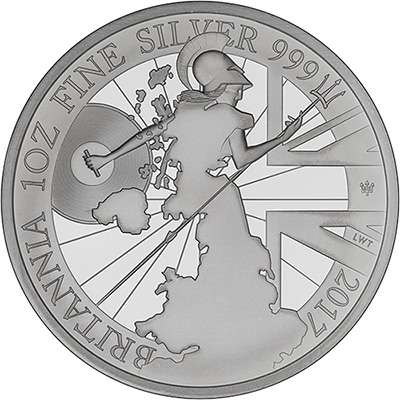 The design  for the 2017 Britannia Proof Coins by British artist, Louis Tamlyn has caused a great deal of debate. The artist has cleverly combined the figure of Britannia with the outline of Great Britain. The design encroaches into the inscription band as does the Union Jack background. The 30th anniversary trident privy mark and the artist's initials LWT are positioned to the right. In 2017, in addition to the uncirculated bullion coin, The Royal Mint issued an additional bullion coin featuring a trident privy mark on the reverse and a new guilloche design on the obverse. Even though it is only the silver Britannia that celebrates its 30th anniversary, both the gold and silver coins feature the same trident privy mark.

The guilloche is an ornamental feature used in the background behind the standing Britannia. It adds an extra layer of security against counterfeit coins. Introduced in 2015, in 2015 and 2016 the uncirculated bullion Britannia coins in both gold and silver featured a dimpled background. This improvement was popular with collectors who were concerned at the amount of small scuffs and scratches which were visible on the 2014 and 2014 bullion coins, even when brand new. The 2017 Britannia uncirculated coin featured the classic Britannia standing in front of a radiant sun. We had a little giggle when we first saw this, we'll leave you to decide whether it warranted a laugh or two.

The sunbeam design in the background helped to protect the field from scratching and also acted as a security feature as a deterrent to counterfeiters. We are pleased to say, there has been an improvement in the quality of the striking and hope that this continues.

In 2013, the alloy of both the gold and silver Britannias changed in 0.999 fineness to conform with bullion coins from other major mints. Whilst, this change was welcomed by investors wanting a '24 carat' coin, sadly the high standard of finish was diminished on the uncirculated coins. The 2013 gold 1oz Britannia was issued as a wider, flatter bullion coin often referred to as the Britannia wafer coin. Whilst still containing 1 troy ounce of gold, this design feature proved unpopular with buyers who preferred the regular thicker coin.

The Britannia coins are British legal tender. The silver 1oz coin has a face value of £2 and the gold 1oz coin has a face value of £100. No matter which fineness the coin is struck in, each contains one troy ounce of silver and gold respectively. The 1oz coins remain the most popular sterling coins for British investors as they attract low premiums and are Capital Gains Tax exempt.

The denomination of the Britannia coin is outweighed by the intrinsic metal value as can be seen on our Live Metal Price page; live gold price and live silver price. British Bullion Coins - The Britannia and The Sovereign

We are proud of our British bullion coins, the Britannia and the sovereign. Two very different coins with the same purpose. Do you have a preference?