Britannia Trade Dollars and The East

British Trade Dollars - Britannia also made an appearance between 1901 to 1935 when she appeared standing on British Trade Dollars, these were never circulated in Britain , but were made for use in the area of the Straits Settlements, Singapore, and Malaya. 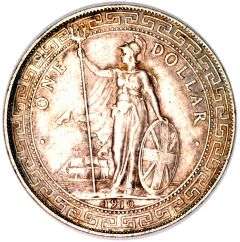 Standing Figure of Britannia on British Trade Dollar of 1910

Wanted - We want to buy any British Trade Dollars featuring Britannia, particularly in better grades, so that we can display better photographs on this page.