What is the Price of a Krugerrand Coin?

There are several prices and values a gold investor should make themselves familiar with - the spot price based on the live gold price, product premiums, buy prices and selling prices. These can change based on the product as we illustrate below. 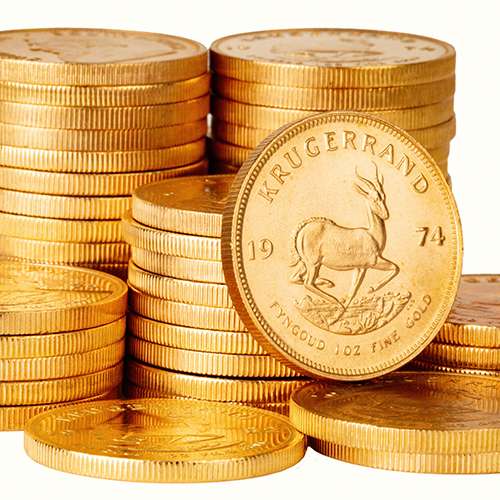 The buy and sell price forms the trading margin (spread) that you will read about on our blogs, forums and investment pages and maximising this ratio allows you to be most profitable in your investments. Proof coins and those considered collectable pieces will carry a higher buy premium and often selling prices will be higher too. If you wish to buy or sell these, we recommend you call us on 01253 343081.

Numismatic Value of a Krugerrand

The Krugerrand was the first modern one ounce bullion coin and it took the world by storm. Produced by the Rand Refinery in South Africa, the Krugerrand was a brilliant way to utilise the huge amounts of gold that the mines were producing by bringing investment gold bullion in the form of coins to the average man in the street. Suddenly, everyone could be a gold investor. The gold Krugerrand made gold coins easy to trade, as gold has always been priced in troy ounces.

At the time of the Krugerrand's introduction, Apartheid was ongoing and many western countries supported sanctions against South Africa, making it illegal to import Krugerrands. Throughout the 1970s and 80s Krugerrands were almost unheard of in the UK and it wasn't until the early 1990s when Apartheid was abandoned did these sanctions lift in full. Krugerrands did land in the UK, be it in small quantities sourced via middle and far eastern markets.

The Krugerrand has only been around since 1967 and has not had time to become a real numismatic collectors piece such as a sovereign or guinea. That said, coin collectors may wish to collect one of each year but do expect to pay more for a dated coin that you would for a bullion Krugerrand.

The silver Krugerrand was released in 2017 as a uncirculated coin and as a follow up a 2018 bullion coin.

The fractional sizes were issued at higher premiums to bullion dealers of 5%, 7%, and 9% respectively. The fractional coins have never been as popular as the full one-ounce coins, usually only being purchased as singles, so that in practice, it would usually cost 10% to 15% premium for the half and quarter ounce, and from 20% to 50% premium for the tenth ounce, most of which seem to have been used in jewellery. Most bullion houses do not want the bother of handling small quantities of low value coins.

As an example of this, in the 1970s we, as a small provincial dealer, would frequently handle 500 Krugerrands in a single day, but a purchase of 100 tenth Krugerrands was a major event, yet it was only 1/50th the size of deal!

Face Value of a Krugerrand

Krugerrands do not carry a face value and are a pure investment bullion coin. They are traded for their gold content using the live gold price and if you buy and sell large amounts you may find yourself liable for capital gains tax. Please read our blog on capital gains tax and how you can avoid paying it in the UK if you buy pound sterling gold coins.

Advantages of a Krugerrand

The great advantage of Krugerrands is that they come as one ounce bullion coins as live gold price is quoted per troy ounce it is easy to value and trade. Comparison with other popular one ounce coins such as Britannias and Maples are also easy.

Disadvantages of a Krugerrand

Krugers were never intended to be an aesthetically pleasing coin, just a lump of gold with a known weight and value. They certainly cannot be called pretty. Collectors seeking aesthetically attractive coins would be better looking at British gold sovereigns, or some of the newer bullion coins.

Bullion coins will be in normal acceptable condition. While some may be in near mint condition others will show considerable wear. All will be guaranteed genuine, and in reasonable condition. Please do not expect bullion coins to be in selected condition, for this you would need to buy selected grade coins.

Here are two bullion Krugerrands available to buy from this page:

You can follow these links to modern bullion gold coins, such as Britannias, sovereigns, maples, philharmonikers, eagles, and kangaroo nuggets.