A large part of our job is looking through coins and detecting fakes that have been brought in by our customers. We also carry out strict checks on coins delivered from other bullion dealers and suppliers. As with many of our blogs, we intend to inform and educate the public about scams, forgeries etc. and highlight some of their features. We have considerable experience and expertise in numismatics so we feel obligated to share information which maybe pertinent to our customers and suppliers. 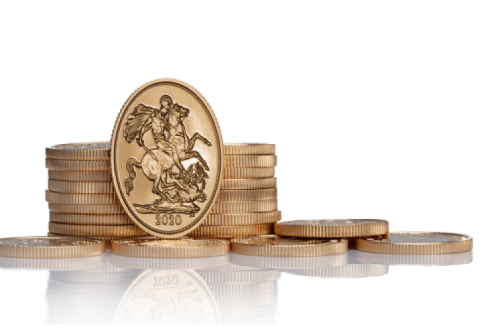 Another Day in the Office

Looking through coins on a daily basis can be tedious and repetitive. But we find it absolutely imperative to do our own checks as there is always the chance that a suspect coin can get lost in a pile of genuine coins. Everyone can make a mistake, even our suppliers can get caught out. In September, we found 5 coins that we deemed suspect and after number of tests, determined them to be fakes. (Click on the images to see larger versions) 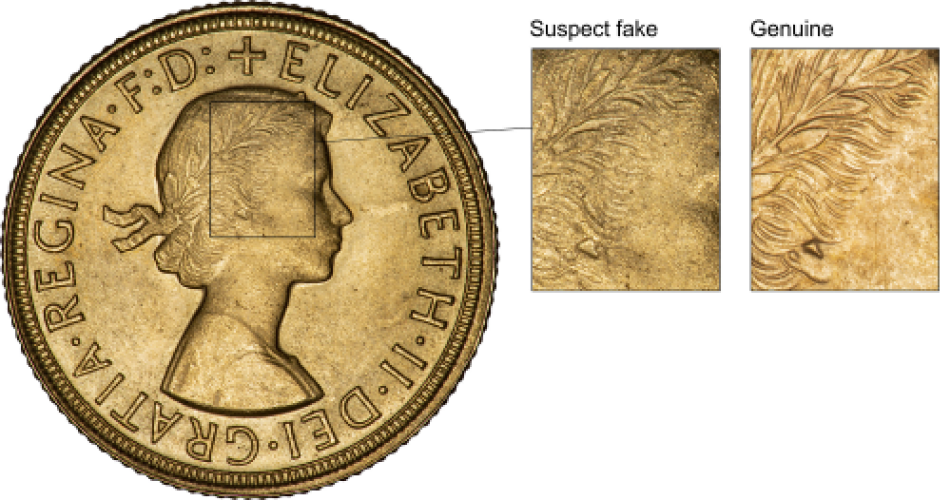 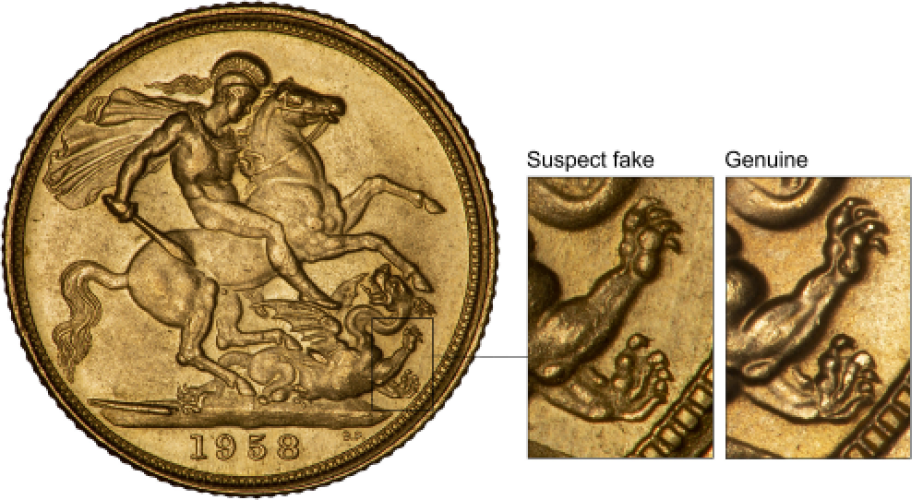 The images above are of one of the coins we received. On the genuine coins the ear, hair lines and leaves are crisp and clear. The fake coin almost looks like the detail has been partly washed away. We believe that all 5 coins were from the same forger as they were almost identical. The same year, same quality, same appearance and low gold content.

To the untrained eye, even with an eyeglass some people can dismiss the lack of definition as wear from circulation or use. In actual fact, the detail has been lost in production. The areas highlighted such as Elizabeth's hairline on the obverse and the dragon's arms behind its head on the reverse look particularly bland. This often happens when prints of coins are used to make fakes as they don't transfer the sharpness or specifics that the original die would have done.

We also noticed that the colour of the fake coin is more yellow than a regular sovereign.

We conducted a niton test to determine the metal of the suspect coin and it gave the following results (parts per thousand). Tolerances are shown in brackets:

The average weight was 8.04275 grams, compared with the normal weight of 7.98805 grams.The gold fineness is marginally low at .912 although this could be .916, allowing for tolerances. Assuming .912, this gives a fine gold content of 7.334988 grams or 0.2358251644 troy ounces, compared with 0.23544 troy ounces standard, so the coins actually contain marginally too much gold. Although this tends to surprise most people, it is not unusual to find fake sovereigns with a higher gold content than normal.
The silver content is also higher than normal for a 1958 sovereign.

A simple test of dropping the coin on a hard surface can be a good, although not definitive indicator of whether a coin is genuine or fake. Fake sovereigns will often sound dull and flat and different to genuine ones. This batch of 1958 sovereigns did sound slightly different to normal sovereigns.

Here is a genuine 1958 sovereign which shows the difference in quality. 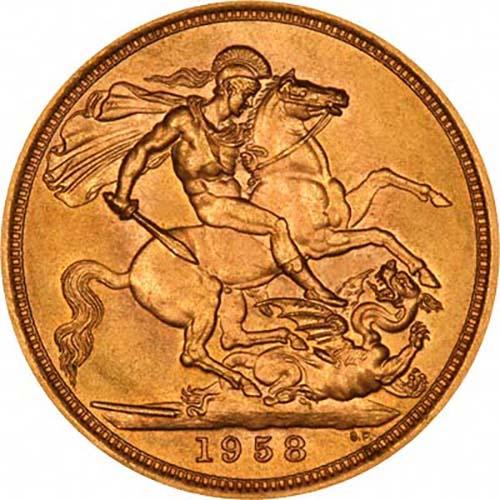 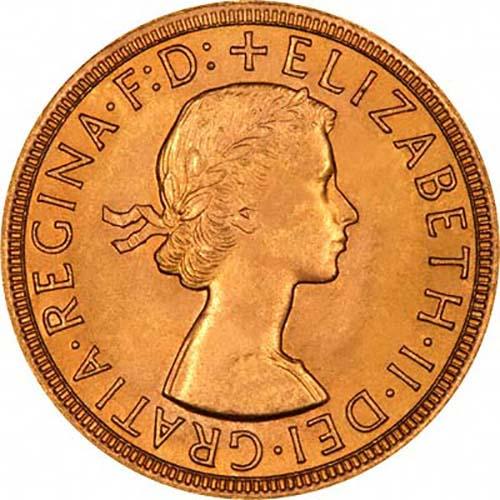 Another, perhaps more time consuming method of determining whether a sovereign is fake or not is by counting the serrations. A genuine 1958 coin should have 108 serrations. The fakes we received from this batch had a couple missing! (Click the image for a better view) 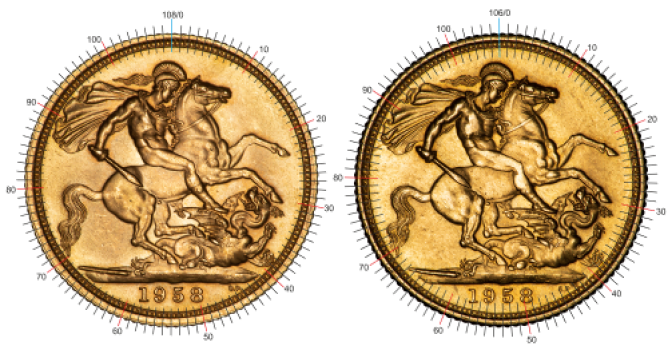 This coin came in a seperate batch and is different to the previous coins. Our niton tester showed the following results:

This coin has a much lower gold content and is much more yellow when compared with a genuine coin. We took side-by-side images to show the comparison. (Click on the images to see a close-up) Believe it or not, the colour difference is less apparent in the photos.

Between the cloak and the rim (about 9 o' clock) of the coin there is a raised line of gold but are quite faint on the photos. Also there are a lot of raised lines in the ring of inner beading inside the squares all the way round. There is a raised line that breaks through the rim at about 2 o' clock and a small pimple of raised gold on left of bottom loop of 9. The horse tail does not look that full, and dragons wrist next to the inner beading is weak. The gap is different between the inner beading and edge on both sides. Similar problems appear on the obverse with a lot of raised lines in inner beading. There is a small but noticeable concave dip under the chin. Likewise, with the previous coins there is a lack of detail in the hairline, leaves and ear.

A Summary of the Results

With this batch of 1958s the following tests confirmed that they were fakes; sound, colour, lack of detail, incorrect metal content. We did not feel that any further testing was needed after these tests. We see too many people who have purchased fakes, either intentionally or unintentionally, but we hope to be able to help and educate as many people as possible to reduce the numbers of people getting caught out.

A Story from Lawrence

About two years ago, we sold this dealer some secondary market Krugerrands, and actually Jane and I hand delivered them. We were surprised that their tellers checked through our coins, and rejected more than 30 of them, yet to us, these were perfectly normal Krugerrands without any significant or obvious damages, scuffs, scratches or knocks. We both thought they were being incredibly picky. As it happened, we agreed to sell them these “rejects” at only a very slight differential compared with the “good” coins. They explained that in Germany, their bullion customers were very picky.

This would be the end of the story, except that the same dealer obviously applies a completely different standard when sorting secondary market bullion sovereigns. The Krugerrands they rejected we would have considered as grade “A”. Many of the sovereigns they have sent us have been grade “C” or fakes. Most of the acceptable ones we would grade as worse than the Krugerrands they rejected. We don’t market grade “B” gold bullion coins to emphasize the fact that our grade “C” are not just marginally worse than bullion, but much worse.

We relate this story partly to demonstrate that the dealer is aware of quality standards, but for some reason fail to apply them to sovereigns. This is possibly because they consider “modern” bullion coins should be “minty”, whereas they consider that for older “circulation” bullion coins, quality does not matter. We will discuss this with them in greater detail later. Or, it maybe just that Krugers are more popular and the expectations of customers higher in Germany."

We have protected and defended this fellow dealer and competitor because we believe they are basically honest and sound.

We do not have the same confidence in many of our other competitors. In fact, our experience leads us to believe that many, if not most, of our newer, recent, competitors are apathetic in their approach to the business, selling on fakes that end up in our hands, much to the dismay of our customers. We would always recommend customers deal with long established dealerships and ‘experts’ in the industry and those happy to cast opinion and advice without the need for a "numismatic service fee".

Although we garner and collect market intelligence, we tend to refrain from naming and shaming perpetrators too readily. We would certainly never do so based on one single incident, unless there was some major additional feature.

We have named names in the past, and stand ready to do so again in the future. When we do we always aim to do this in the public interest with sufficient evidence to be fair and objective. We never like to see customers mis-sold items or at worst ripped off.

We have had named parties threaten us with legal action for defamation, but in every case, this has been a bluff and none have ever proceeded beyond an initial idle threat.

As much as we all try and prevent mistakes, they're almost inevitable. This blog is not to point fingers, but merely to highlight that even the professionals can get it wrong sometimes.

Click the link to see our video "How to Spot a Fake: 1918 Gold Sovereign" on our YouTube channel

We are currently looking to expand our content with regard to fake coins and bars. Stay tuned.