Toning and Tarnishing on Coins

Tone and Tarnish - The Same Only Different

Essentially, the two words mean the same, but with a positive or negative implication respectively. Many experienced coin collectors realise and believe that an old coin which has acquired a beautiful rainbow toning over a long period of time, looks better, and appears more natural than one which still looks as bright and shiny as the day it was minted. Different coinage metals tone differently, so at this point, we will provide a brief analysis of the different main coinage metals. 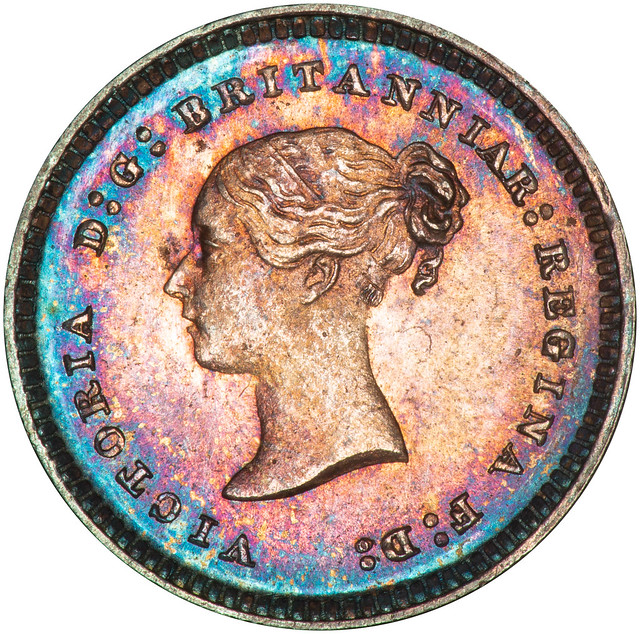 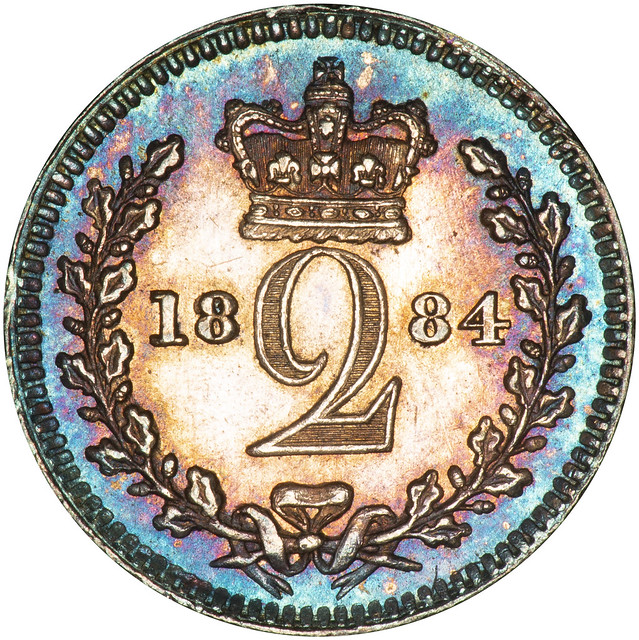 Pure platinum is almost completely inert and unreactive. Nothing in the atmosphere will react with it, so it will always retain its original bright shiny finish, although this is usually more subdued than for silver, or some other metals.

Platinum alloys may react and tone, but this will be because the other less noble metals in the alloy are reacting with oxygen, hydroxides, or sulphides (sulfides in American English), not the platinum.

Gold is similar to platinum when it comes to toning. Pure gold is almost completely unreactive. Gold alloys (carat golds) will tone and tarnish, again because baser metals in the alloy react, not the gold.

Most traditional gold coins were made of high carat alloys (90% or more gold), and usually only tone very slightly over a long period of time. Some modern gold bullion coins are made of "fine" gold (99.9% or higher gold content), and these almost never tone, although some do exhibit "red spot", probably due to very small amounts of copper crystalising locally.

Silver is slightly more reactive than gold, but has been stated to be stable in pure air (whatever that means) or pure water. Because air is a complex and highly variable mixture, it is actually nonsense to talk about pure air, at least without a definition of what is meant by pure air. 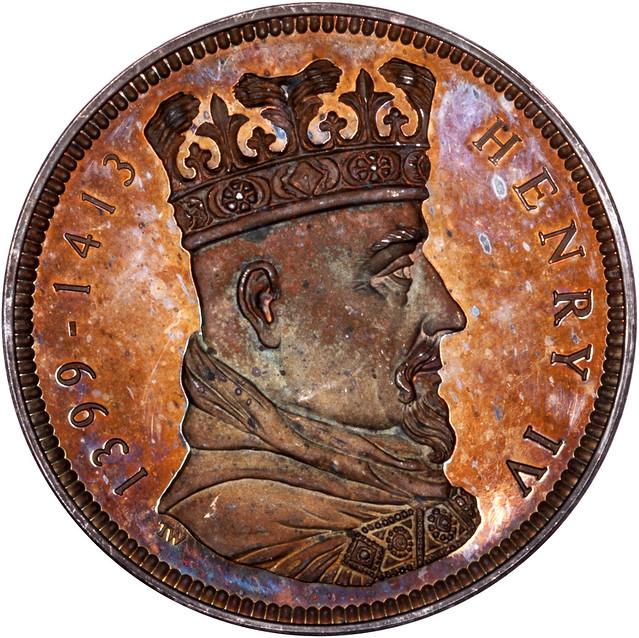 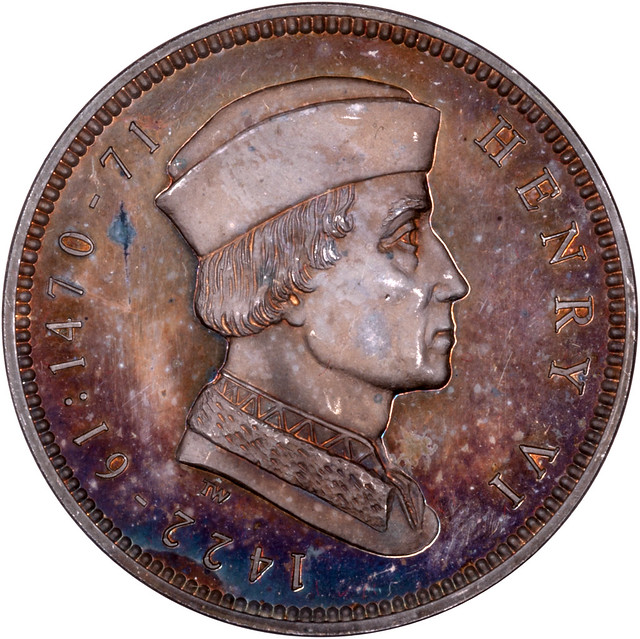 Silver will react when exposed to ozone (a highly reactive and unstable form of oxygen), hydrogen sulphide, and some other chemicals. The most common cause of toning, tarnishing, or discolouration of silver is hydrogen sulphide, which can and does occur naturally in many atmospheric conditions. Even pure or fine (99.9% or higher) silver can and does tone. Most silver alloys will tend to tone more readily because of the presence of more reactive metals in the alloy. The main admetal in silver alloys is copper. 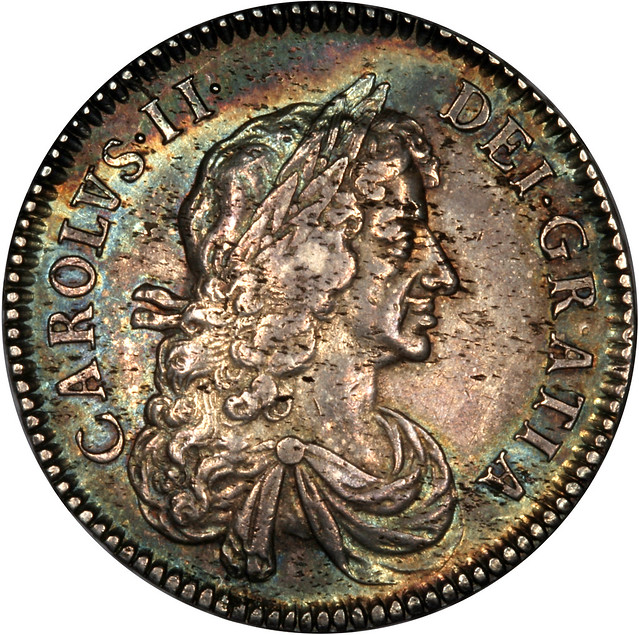 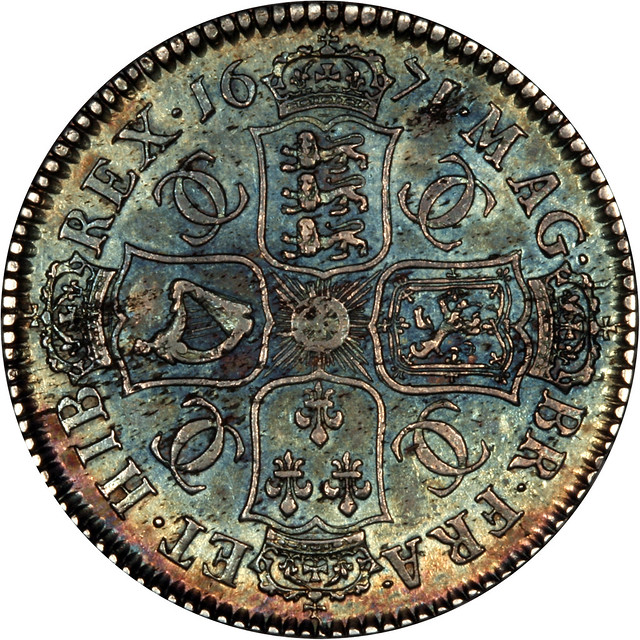 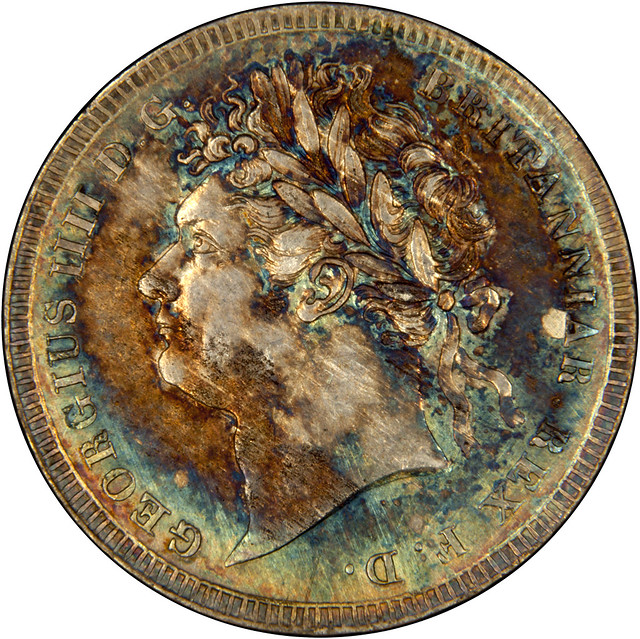 Copper reacts with atmospheric oxygen to form copper oxides, and with other atmospheric constituents to form other compounds including carbonates. The presence of water or humidity tends to increase the rate of reaction, as does increased temperatures. This is true for most metals and most chemical reactions. Copper and bronze coins which are hundreds of years old, can still be found with full or partial mint lustre (their original natural colour) demonstrating that these metal do not always tone. In our opinion, this is probably due to low or zero humidity in the air, or low levels of acidic compounds in the atmosphere. Most collectors would prefer their copper and bronze coins to have their original lustre, therefore toning of these base metal coins is generally considered to have neutral or negative effect on their aesthetic quality and value. Ancient copper and bronze coins often undergo a further chemical reaction to form what is generally called patina, which usually helps to protect the coins from further corrosion or reaction. 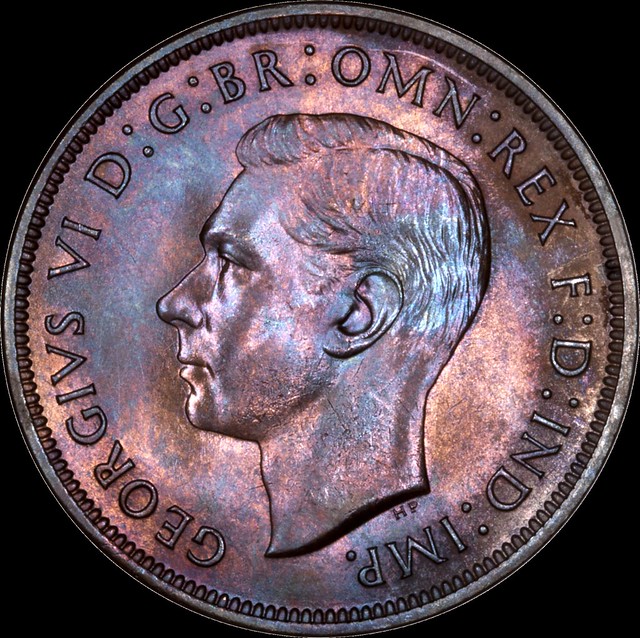 Bronze is an alloy containing mainly copper, usually with small amounts of tin with or without other metals. Both metals tone in a similar manner, although bronze could be expected to react more slowly. Brass is a copper alloy with zinc.

Aluminium and Other Metals

Aluminium oxydises quite rapidly, so most collectors only see such coins as have already toned. Because of the relative molecule sizes between aluminium and its oxides, the oxide layer forms a protective layer o top of the elemental aluminium which prevents or slows further oxydation. Steel is increasingly being used in modern coin alloys because it is relatively cheap. Most steels corrode forming rust, but hsi depends on the composition of the steel alloy. Small amounts of admetals cause significant changes in qualities.

We hear more comment about toning or tarnish on silver coins than on any other metal. There are a number of reasons for this.

In its normal elemental state, silver is highly reflective, having a brilliant white metallic lustre. Because of this, when it does tone, as it always does, the contrast and difference is more noticeable than with most other metals. Collectors who are ignorant of this fact will often complain that their coin is tarnished, applying a negative spin to the facts.

The best way to avoid being disappointed by having bought a toned silver coin, or finding the a coin you already own has tarnished is to realise that silver does and will react with atmospheric gases and other chemicals, and therefore will tone.

There are ways to slow the development of toning, such as storing the coins in a dry inert atmosphere, storing them in tight fitting capsules, or both. Real coins, the sort which were originally issued for use in circulation as money, were never issued or stored in capsules, and were generally stored in a safe place, with little regard to the almost irrelevant and unimportant fact that they would tone. Modern coins, many of which are designed, made, and marketed for and to collectors or investors, are usually packaged in such a way as to protect them from casual handling, and this protection often takes the form of a plastic capsule, which, as explained above, usually helps to reduct the rate of toning, but seldom, if ever, eliminates it. The encapsulation used buy most Professional Coin Grading Companies probably eliminates further toning, although most plastics are slightly unstable, and we in the course of time, actually damage the surface of the coins they are intended to protect.
Coin collectors who expect all their silver coins to arrive bright and shiny, and for them to stay that way, are like people who prefer silicon breast implants compared with the real thing.

We would always to prefer, and recommend, to leave most coins as they are, and refrain from cleaning them. More coins are ruined by careless cleaning than any other cause. Sometimes we will silver dip coins which we think may benefit from the removal of over-dark or very uneven toning. Mostly we try to leave toning where when it looks natural and enhances the appearance of a coin. Remember that the toning actually helps to prevent further toning.

We we do decide to "dip" a silver coin, we normally use "Goddard's Silver Dip", a proprietary product which states that it contains thiourea (an organosulfur compound with the formula SC(NH2)2). We have never seen a fully detailed explanation of the reaction which takes place, but we suspect that each use removes a slight amount of silver from the surface as opposed to restoring it. Another method which we really should get around to trying, is to use aluminium foil in a baking powder solution, which is stated to reverse toning action, but we doubt that all of the original surface is restored to precisely the same original location and state.

Silver acquires a tone through tarnishing. A pleasant, even tone can enhance the appearance and desirability of an old silver coin. Some toning has rich blue, green, indigo, and violet "oil effects", toning like this will be appreciated by most connoisseurs. Do not clean any silver coin with this type of toning. If a silver coin is so dark brown or black that its design can hardly be seen, then it may, be worth dipping, usually in a proprietary solution, such as Goddard's Silver Dip.

Whatever you do, do not use any abrasive paste or cloth. Warm soapy water may also be used. Even if silver coins are carefully cleaned, they end up looking artificially bright and silvery. Many collectors will not buy a silver coins which looks as though it has been cleaned.

As we have said for silver coins, it is easy to spoil a pleasing tone, which may have taken centuries to be acquired. Copper and bronze coins will almost always end up looking a brassy unpleasant colour after cleaning. Even gold coins can sometimes be ruined by removing a rich tone which has built up over a long period of time

You may wish to read more articles in our investing in silver guide.