This is our blog. If you are interested in buying please follow these links to our bullion sovereigns and our graded sovereigns.

The sovereign is Britain’s most popular gold coin and is probably the most famous gold bullion coin, both historically and globally. The sovereign is legal tender and is therefore Capital Gains Tax exempt which makes it a favourite with investors. The gold sovereign is not just a bullion coin, it is also one of the most collected coins by numismatists and certain years can achieve record prices. Whilst the sovereign, also referred to as the full sovereign, at just under a quarter troy ounce of gold, is the most popular weight, the coin is also issued in the following sizes quarter, half, double (£2) and quintuple (£5). 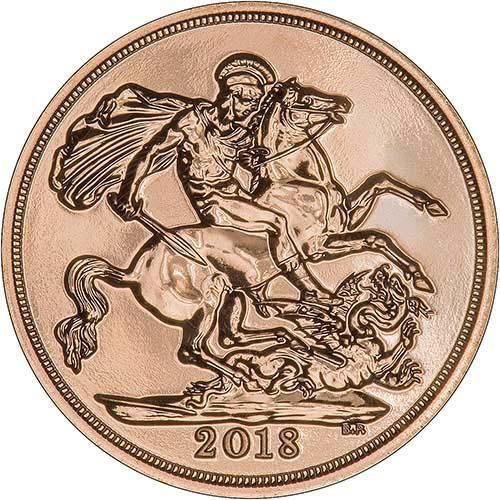 The History of the Sovereign

The English sovereign was first issued as a gold hammered coin in 1489 for the King Henry VII. Designed by German engraver, Alexander of Bruchsal, the obverse featured the King in his coronation robes seated upon his throne, symbolising the power, success and splendour of the fledgling Tudor dynasty. The reverse design featured the Royal Arms of England set within a double Tudor rose. The first gold sovereign weighed 15.55 grams (half a troy ounce), was made from 23 carat gold and had a face value of one pound sterling. There were a number of changes to the weight of the sovereign until it was last struck in 1604 when it was replaced by the gold hammered Unite and Laurel coins. 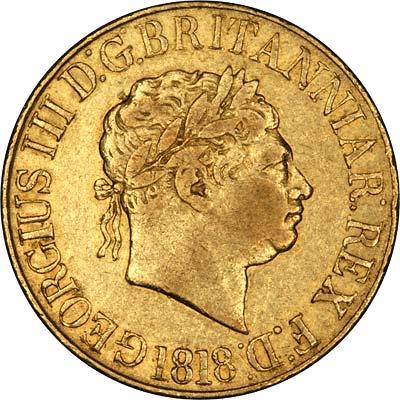 In 1816, after the gruelling Napoleonic Wars and a crippling shortage of coins, the British government ordered a huge reform of British coinage. It was decided that a new gold coin would be struck – the sovereign.In accordance with British Coinage Act of 1816, the sovereign would be made in 22 carat gold (0.916 fineness), weighing 7.9881 grams (0.2354 troy ounces), with a diameter of 22.05mm, a milled edge and a nominal value of one pound or twenty shillings. The specifications have remained the same and are still used for the production of sovereigns issued today.

The first modern gold sovereign was struck in 1817 in the Royal Mint’s new premises in Tower Hill using their newly acquired steam powered coin press which had been designed by Matthew Boulton and James Watt.

St George on the Sovereign

The sovereign was widely acclaimed for both its attractive design, usefulness and its durability.  Whilst the obverse bore the portrait of George III, it was the reverse design that stole the show. Set within a wide garter with the inscription HONI SOIT QUI MAL Y PENSE, Benedetto Pistrucci’s dramatic engraving of St George and the dragon has become synonymous with the gold sovereign. It was the 200th Anniversary of the Sovereign in 2017 and this British gold bullion coin has stood the test of time. In 1821, the garter was removed and the image of St George and the dragon was enlarged on the coin's surface. Pistrucci’s classic design of St George with a short sword in one hand and the reins in the other, mounted upon a horse rearing over a slain dragon has stood the test of time and is still featured on sovereigns today 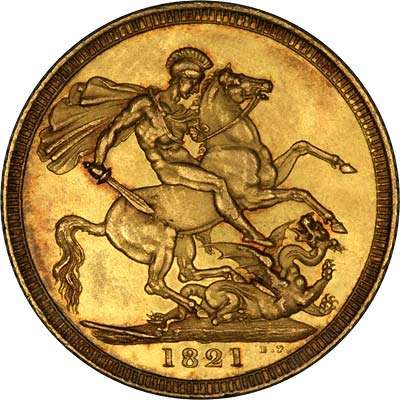 As the British Empire expanded during the Queen Victoria’s reign, the sovereign became the most widely circulated gold coin in the world. Over 206 million sovereigns were issued during her reign.

During her 63 year reign, Victoria sovereigns were struck using three portraits, the Jubilee Head, Old Head and young head with two reverses, the Shield and St George and Dragon. There were many small variations on both the obverses and reverse designs, as well as errors and overdates all of which can affect the value of the sovereign.

The Royal Mint opened a number of branch mints in various outposts of the Empire to produce sovereigns close to the main sources of gold mining. The first overseas branch mint was opened in Sydney, Australia in 1855. The majority of sovereigns continued to be struck in London but they were also produced in branch mints in Australia’s cities Sydney (1855-1926), Melbourne (1872-1931) and Perth (1899-1931). This extended to Ottawa, Canada (1908 -1919) and Bombay, India (1918) and Pretoria, South Africa (1923-1932). In 2013, The Royal Mint issued a licence for sovereigns to be minted in India.

The sovereign was a real circulating coin until the outbreak of the First World War in 1914. At about this time, most countries in the world reduced or stopped production of gold coins for circulation, and switched to a "token" coinage.

By 1933, almost every country had stopped gold coin production, and it did not restart until about 1960. Even now, there is no country on the planet where gold coins regularly circulate as part of their coinage system.

Technical Specification of a Sovereign

With a value of one pound or twenty shillings, it was common for sovereigns to be used to pay for goods and services until the First World War. The war was expensive and gold was needed to finance the war effort. The British government introduced banknotes to replace gold sovereigns and so began the demise of the sovereign as circulation coinage. Production of sovereigns at the London Royal Mint ceased in 1917 although sovereigns continued to be issued by the Royal Mint’s branch mints until 1932. There was an exception to this; in 1925 sovereigns were minted in London  as were the restrikes of 1949, 1950 and 1951.

Between 1949-1951, the Royal Mint issued sovereigns struck in London using existing dies for the 1925 George V sovereigns. It is understood that over 886,000 of these backdated sovereigns were minted to fulfil a market demand for gold bullion, to control rising premiums and to counter forgeries from Italy and the Middle East.Sovereigns were struck in 1937 as pattern proof coins for Edward VIII, in the 1937 George VI four coin proof set and for Elizabeth II in 1953. They were not issued for circulation again until the reintroduction of gold sovereigns in 1957. 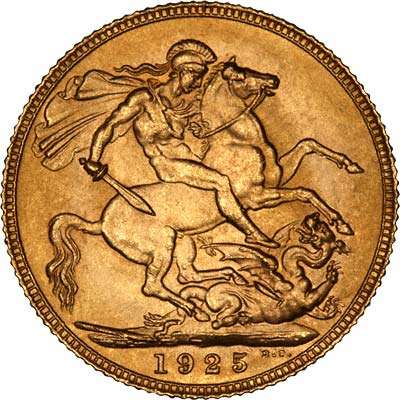 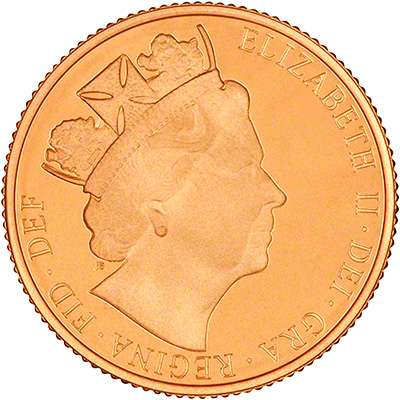 A portrait by James Butler was commissioned to commemorate the Queen’s 90th Birthday which features on the 2016 proof sovereigns.

Bullion, Brilliant Uncirculated or Proof – What is the Difference?

Brilliant Uncirculated or B.U is a term that has been introduced by The Royal Mint, it is not a grade. It indicates that the sovereign has been struck twice during production to give a slightly sharper definition. However, the prices charged do not usually reflect the intrinsic metal value or value for money. Often the Brilliant Uncirculated coins are issued in a presentation card or box and may have a certificate.

Proof s a grade which reflects the high standard of finish of the coin. Proof sovereigns were often issued to commemorate new portraits and can be found in both a matt finish (1817-1953) and a highly polished mirror and matt finish (1979-now). It is now common for proof sovereigns to be issued each year, in 2015 two proof sovereigns were issued, one with the fourth definitive UK coin portrait by Ian Rank Broadley and one with the fifth portrait by Jody Clark. Often proof sovereigns have been struck between four and seven times to achieve the sharp definition of the design. They will have a mintage limit and will have been issued in a presentation box, however, modern proof coins are also issued in a plastic capsule to protect the delicate surface and will have a certificate of authentication. You should never remove the coin from the capsule as they are easily damaged which will affect the value and desirability. Between 1982 and 1999, sovereigns were only struck in a proof finish.

Whilst the obverse of the sovereign has changed with each monarch, the most popular design on the reverse of the coin for almost 200 years has been Benedetto Pistrucci’s St George and the dragon engraving.

Not Every Year Exists!

It should be noted that not every date exists for gold sovereigns. In fact, gold sovereigns were not issued for circulation after 1932, although the Royal Mint resumed production in 1957 partly to meet world demand for gold bullion coins. The only dates minted between 1932 and decimalisation were 1957 to 1959, and then 1962 to 1968. These dates all bear the first portrait of Queen Elizabeth II as used on almost all pre-decimal coins, with the familiar St. George & Dragon design on the reverse. Of these dates 1957 and 1959 are the two most difficult to find and as a result are the most collectable.

Sovereign Facts - Did You Know…?

How much are gold sovereigns worth?

The majority of sovereigns are bullion sovereigns – they have been bought for investment and are worth their intrinsic metal value.

eg. If the live gold price is £1000 per one troy ounce, a sovereign = £234.54. Most dealers will buy these coins at a slight premium under the intrinsic metal value.

However, there are a number of sovereigns which are highly sought after and will fetch much higher prices. With all sovereigns, the better the condition of the coin and the lower the mintage, the more valuable they will be.

Our Top 10 Most Expensive Sovereigns

In 1859, the Royal Mint rejected a batch of gold alloy as it was too brittle for coin production. However, metallurgist, George Ansell managed to make the gold alloy tougher than normal sovereigns and the gold was used to produce the Ansell sovereign. You can spot an Ansell sovereign by the extra line in the hairband at the back of the Queen’s head. 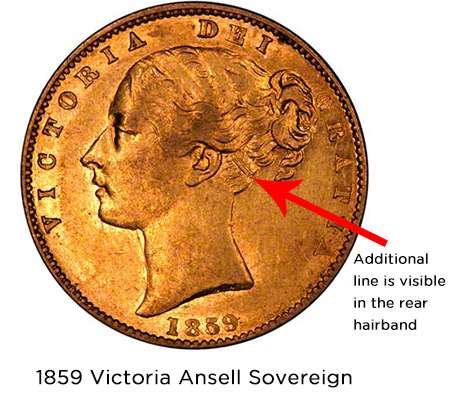 Whilst sovereigns in high grades and low mintages are highly desirable to serious coin collectors, there is a growing demand for sovereigns with overdates and errors. An overdate occurs where a die was recut or repunched to alter the date. Errors sometimes happened when letters or numerals were accidently mixed up e.g 1 might be substituted with a capital I, or A would be an upside down V.

We have a huge range of sovereigns for sale, from bullion to collectible sovereigns in varying grades from most years and mintmarks.

We are always interested in buying sovereigns, bullion or high grade sovereigns, particularly rare years or mints. Whether you have one coin or a whole collection, contact us on 01253 343081 or by email at [email protected] and we will make you an offer.

If you would likle to read more about the history of some of Numismatics most striking designs we recomend the following: