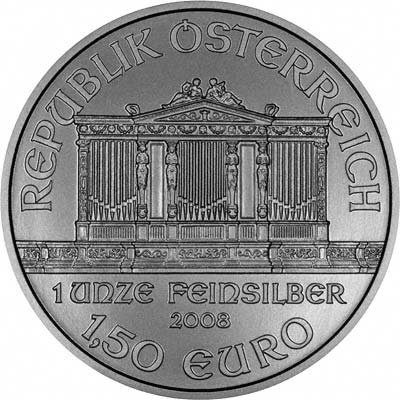 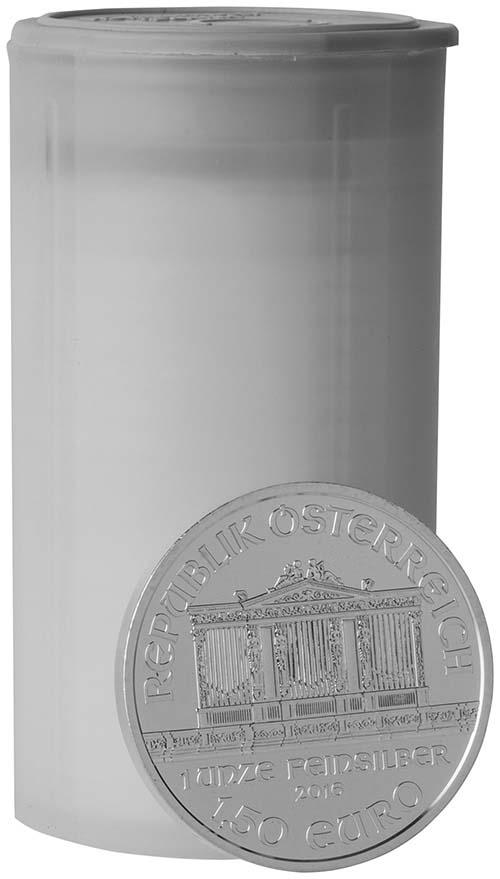 The Austrian Mint first started producing gold bullion coins in 1989, but it was not until Friday 1st February 2008 that the first silver 1oz Vienna Philharmonic coin was released. This silver coin, also known as a Philharmonic, Philharmoniker or Phil is produced with a purity of 99.9% silver and uses the designs found on the obverse and reverse of the gold version.

The concept of the one ounce bullion coin was to provide an easy way to purchase convenient small quantities of bullion silver in the form of coins. However, the attractive design does appeal to collectors too.

The silver coins are issued in tubes of 20, and then further housed in monster boxes which contain 500 coins in total.

You can read the original press release from the Austrian Mint here.

Design of the Silver Philharmonic 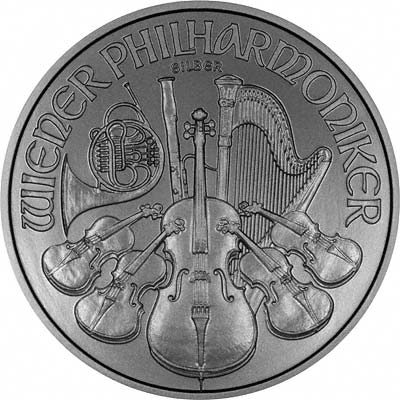 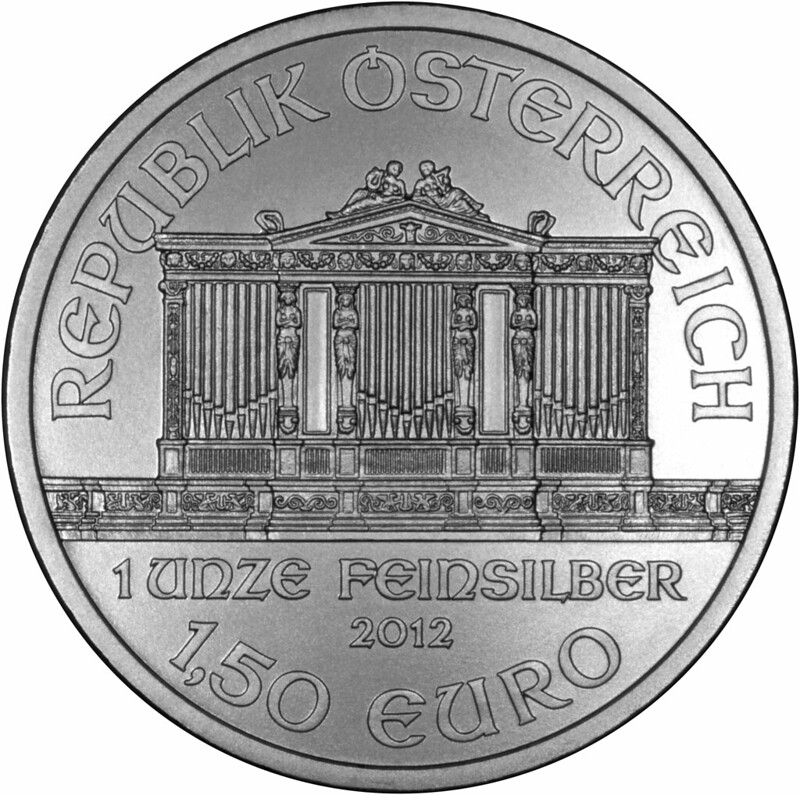 The denomination, or face value, is 1.50 Euro. These coins have a legal tender status in Austria.

"The face value of a bullion coin is appreciably lower than the value of its metal content. The somewhat unusual face value of 1.50 Euro on the new coin is explained by the fact that both the 1 Euro and 2 Euro are reserved for ordinary circulation in Europe."

All new coins are subject to VAT at the current rate. However, we sometimes have Philharmoincs which can be purchased with VAT on the dealers profit margins. You can read about VAT implicatoins on silver coins here.

1 oz Silver Coin Philharmonic Bullion Best Value - Secondary Market are currently priced from from £20.48, which is inclusive of VAT.

The “Vienna Philharmonic” now in Silver

Silver fans from the world over have been cheering the rising silver prices over the past few years. Their joy in recent months has been dampened somewhat by the difficulties that dealers have been having in securing adequate supplies of silver bullion coins.

Their excitement then is all the more understandable at the announcement that the Austrian Mint has decided to enhance its “Vienna Philharmonic” bullion coin range with a one ounce pure silver coin. The new Silver Vienna Philharmonic goes on sale worldwide on Friday, 1st February, 2008, and the mint reports that the massive pre-orders for the coin have been a real challenge to its production capacities.

What lies behind this decision by the Austrian Mint?

The Mint Master Dietmar Spranz explains: “A good producer listens to the market. The addition of a silver ounce to our bullion programme was a quite logical step, and it once again demonstrates the Austrian Mint’s competence in precious metals.”

The new coin is one troy ounce (31.103 g.) of .999 fine silver. Its design is almost identical to its golden counterparts. Apart from the inscription “1 Unze Feinsilber” under the representation of the organ in the Golden Hall, the word “Silber” appears on the orchestra side of the coin in small lettering above the cluster of musical instruments. The coin also has a smooth edge.

Traditionally the denomination of a bullion coin is appreciably lower than the value of its metal content. The somewhat unusual face value of 1.50 Euro on the new coin is explained by the fact that both 1 Euro and 2 Euro are reserved for ordinary circulation coinage in Europe.

Dietmar Spranz: “The face value of a bullion coin, however essential, is largely symbolic. Such coins are certainly legal tender in their country of origin, but they are never intended as means of payment. The one ounce silver Vienna Philharmonic is an investment in precious metal.”

Most investment advisors have always recommended the holding of part of one’s investments in precious metals. Such holdings serve as a store of value against inflation and the fluctuation of other investment vehicles like stocks and shares or real estate. Bullion coins have the advantage of being portable, easy to store and of being actively traded 24 hours a day around the world.

Coins carry their official guarantee minted on them. They allow holders the flexibility of buying or selling silver or gold in any quantity they require, large or small.

Using the same design as the silver and gold versions, the Austrian Mint produced the first Platinum Vienna Philharmonic in 2016.

Produced using 99.95% platinum, the coin has the same face value as their gold counterpart of 100 Euro.

The Austrian Mint, later went on to produce a Platinum Philharmonic in a quarter of an ounce and a face value of 4 Euro.

Click here to read about the first gold bullion coin with a face value in Euros.